Prof Maitland reviewed how the energy landscape might evolve over the decades ahead and the challenges we will face if we are to continue, as we must, to use fossil fuels well into the second half of this century. Prof Maitland gave his personal view on what we need to do to meet the challenging carbon mitigation targets that we must meet to avoid the consequences of catastrophic climate change. 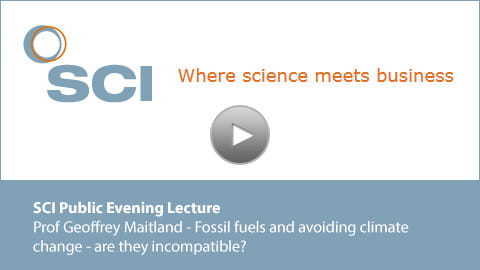 Professor Geoffrey C Maitland FREng FIChemE FRSC CEng CChem CSci is currently President of the Institution of Chemical Engineers (IChemE). After studying Chemistry at Oxford University and a period as an ICI Research Fellow at Bristol University, he was appointed to a lectureship in Chemical Engineering at Imperial College London in 1974. In 1986 he moved to the oil and gas industry with Schlumberger, where he held a number of senior technical and management positions. He rejoined Imperial College in September 2005 as Professor of Energy Engineering and his current research covers clean and efficient fossil fuel production with particular emphasis on carbon dioxide mitigation processes.

Prof Maitland was awarded the Hutchison Medal by the Institution of Chemical Engineers in 1998 and served as President of the British Society of Rheology from 2002-2005. In 2006 he was elected a Fellow of the Royal Academy of Engineering. He was awarded the IChemE Chemical Engineering Envoy Award for 2010 for his media work explaining the engineering issues involved in the Gulf of Mexico oil-spill. In 2011 he chaired the independent review of the UK Offshore Oil and Gas Regulatory Regime ('The Maitland Report') and in 2012 received the Rideal Lecture Award from SCI and RSC.