Finding solutions for feeding the world

The world population is projected to grow to 9-10 billion people by 2050 and food production will have to increase by at least 80% to meet growing demand. Around one in six people on earth are not currently getting enough to eat or enough critical nutrients while a similar number are overweight, or obese, as a result of eating too much.

Is the answer to ending hunger therefore to redistribute food? Or is it to rely on new technologies including genetic modification of crops? Or does it depend on us all becoming vegetarians?

Watch the video of the full lecture below, to find out what Lord Krebs proposed. 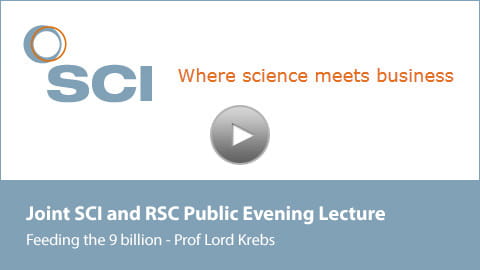 The lecture, which was jointly hosted by SCI and RSC, forms part of the celebrated series of SCI Public Evening Lectures on Sustainability - a collection of talks from some of today's most eminent scientific minds. They are all free and open to the general public.

About Professor Lord Krebs
The speaker is Professor Lord Krebs, principal of Jesus College, Oxford, who is an internationally-renowned scientist in the field of behavioural ecology. He was knighted for services to behavioural ecology in 1999 and appointed to the House of Lords as an independent crossbencher in 2007, where his particular areas of interest include environment, science, education and food.

Lord Krebs has published over 300 scientific papers and has co-authored several books including the standard student textbook in his field. He holds 15 Honorary Degrees and numerous awards and medals for his scientific work. Among other distinguished positions, he is a Trustee of the Nuffield Foundation, Chairman of the UK Science and Technology Honours Committee, and Chairman of the House of Lords Select Committee for Science and Technology. He sits on the UK Climate Change Committee and chairs its Adaptation Sub-Committee.