SCI welcomed Prof Ed Bullmore to present a Public Evening Lecture on Understanding and treatment of mental health disorders such as depression and psychosis, on 28 May 2015.

Prof Ed Bullmore discussed recent progress in the new science of neuro-immunology that has shown that the brain is intimately interconnected with the immune system. This creates an opportunity for radically new ways of understanding mental health disorders and their treatment. The Medical Research Council and the Wellcome Trust have recently invested, with major pharmaceutical companies, in two consortia set up to explore specifically the rationale for anti-inflammatory drugs as new treatments for some (inflamed) patients with depression. 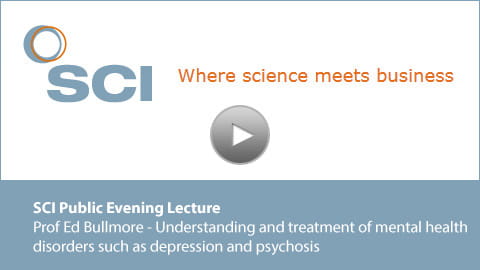 Prof Bullmore trained in medicine at the University of Oxford and St Bartholomew’s Hospital in London, then worked as a Lecturer in Medicine at the University of Hong Kong, before specialist clinical training in psychiatry at St George’s Hospital, and then the Bethlem Royal & Maudsley Hospital, in London. From 1993-1999 he was a Wellcome Trust (Advanced) Research Fellow at the Institute of Psychiatry, King’s College London; and then moved to Cambridge as Professor of Psychiatry in 1999. Since 2005, he has worked half-time for GlaxoSmithKline first as Head of GSK’s Clinical Unit in Cambridge and since 2013 as Vice-President, ImmunoPsychiatry. He is Clinical Director of the Wellcome Trust/MRC funded Behavioural & Clinical Neuroscience Institute, Scientific Director of the Wolfson Brain Imaging Centre, Chair of Cambridge Health Imaging, Co-Chair of Cambridge Neuroscience, and Head of the Department of Psychiatry at the University of Cambridge; and an honorary Consultant Psychiatrist and Director of R&D in Cambridgeshire & Peterborough Foundation NHS Trust. He has published about 450 scientific papers and his work has been highly cited. He has been elected as a Fellow of the Royal College of Physicians, the Royal College of Psychiatrists, and the Academy of Medical Sciences. His research has focused on mathematical analysis of neuroimaging data, applications of neuroimaging to understanding of neuropsychiatric disorders, and development of new therapeutic approaches for mental health disorders.