A new multiyear study from scientists at the Woods Hole Oceanographic Institution (WHOI) has shown for the first time how changes in ocean temperature affect a key species of phytoplankton. The study, published in the October 21 issue of the journal Science, tracked levels of Synechococcus—a tiny bacterium common in marine ecosystems—near the coast of Massachusetts over a 13-year period. As ocean temperatures increased during that time, annual blooms of Synechococcus occurred up to four weeks earlier than usual because cells divided faster in warmer conditions, the study found. 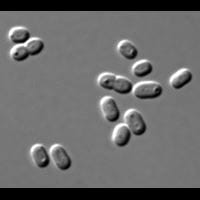 Shifts like these could have a major impact on marine ecosystems worldwide, says WHOI biologist Heidi Sosik, who initiated the study. ‘Synechococcus and other phytoplankton are sentinels. They can tell us how an ecosystem is responding to shifts in climate,’ she says. ‘If ocean temperatures continue warming over the next century, some ecosystems could become more and more dominated by small phytoplankton, eventually leading to shifts that could affect the livelihoods of larger species like fish, whales, and birds.’

That shift to smaller phytoplankton isn’t a sure thing, however. Although Sosik and her colleagues saw that Synechococcus cells reproduced more quickly than usual as conditions warmed, the overall size of the phytoplankton bloom didn’t increase much during the course of the study. As the bacteria grew more quickly, the team found, they also were consumed more quickly by tiny protozoa, viruses, and other single-celled organisms that prey on the Synechococcus. As a result, the overall levels of the bacteria stayed roughly the same from year to year, although the timing of the bloom shifted earlier or later as the water temperature changed.

‘That was a surprise to us,’ says Sosik. ‘We didn’t expect such a tight lockstep between Synechococcus and consumers as the spring bloom changed. It shows that the consumers are able to keep up.’ As a result, she says, this balance leads to a similar bloom cycle year after year, just with a shift in timing.

‘The question is, ‘how stable is that balance?’’ adds Kristen Hunter-Cevera, lead author on the paper and a graduate of the MIT-WHOI Joint Program in Oceanography. ‘In the future, will consumers be able to keep up? A mismatch is a huge concern. If the bloom expands, or moves earlier in the year, higher-level organisms that expect to feed on those consumers at a certain time of year might miss them entirely.’

The WHOI team was able to determine division rates of Synechococcus by using a mathematical model and data from an automated sensor developed by Sosik and her WHOI colleague Rob Olson called ‘FlowCytobot,’ which continually sampled seawater for 13 years. The device looks specifically for the physical characteristics of Synechococcus cells, which are roughly one micrometer in diameter, and contain compounds that glow orange and red under laser light. Tallying cells with this method has allowed the researchers to home in on just one species of phytoplankton among thousands in seawater—the first time a long-term experiment of this sort has been able to do so.

‘Looking at physiology at the species level is sort of a holy grail in marine ecology,’ says Sosik. ‘Each species interacts with its environment in a different way, so to understand the impacts of something like temperature, it’s critical to be able to look at a single one. Doing that every hour, every day, every year gave us a very high-resolution picture. There’s nothing like this out there.’

Earlier experiments have followed phytoplankton over long periods of time by using satellite imagery, Sosik notes, but that sort of remote sensing can only give researchers a big picture of all phytoplankton lumped together, and can’t reveal what’s happening to a specific type of organism. Even the existing “gold standard” for analyzing a single species of phytoplankton—identifying it by hand in samples of seawater—has its own limitations.

Although the method offers a very accurate look at a given species, says Sosik, relying on field samples can provide only a ‘snapshot’ of one particular moment in the ocean.

FlowCytobot, however, offers the best of both worlds for time-series studies: it’s sensitive enough to measure changes in a single species, and can do so around the clock, letting researchers see minute changes in the phytoplankton population over long periods of time. ‘Now that we have the appropriate technology to study phytoplankton populations on time scales of hours to weeks, we’re gaining a much better understanding of what controls productivity in coastal ocean ecosystems,’ says David Garrison, director of the National Science Foundation’s biological oceanography program, which provided funding for the research.

The fact that FlowCytobot could measure Synechococcus for so long—and at such regular intervals—was made possible by its installation at the Martha’s Vineyard Coastal Observatory (MVCO), a platform of instruments stationed just off the Massachusetts island’s coast. Cables carrying both power and data run between the MVCO and a small laboratory on shore, allowing sensors on the platform to stay submerged around the clock, and send real-time updates when any measurements are made.

Although the MVCO is a small observatory, Sosik notes, much larger ocean observatories are currently being built off the US Pacific and Atlantic coasts, and other locations worldwide. These new networks may enable similar studies in the future, offering a detailed look at ocean ecosystems around the globe. ‘Looking at this sort of time scale, at this resolution, would be impossible without ocean observatories,’ says Sosik. ‘I’m hopeful we’ll be able to invest in the sort of sampler and detection technology that can take full advantage of those newer platforms as well. It’s really a much more sophisticated way of measuring ecosystems than our existing methods.’

In addition to the National Science Foundation, other funders include the Gordon and Betty Moore Foundation, NASA, the National Defense Science and Engineering graduate fellowship from the U.S. Department of Defense, and WHOI.

The Woods Hole Oceanographic Institution is a private, non-profit organization on Cape Cod, Massachusetts, dedicated to marine research, engineering, and higher education. Established in 1930 on a recommendation from the National Academy of Sciences, its primary mission is to understand the oceans and their interaction with the Earth as a whole, and to communicate a basic understanding of the oceans’ role in the changing global environment. For more information, please visit www.whoi.edu.