Water, but not as we know it

The latest Retired Members' Lunch at Belgrave Square on 23 March 2012 was preceded by a fascinating presentation by Professor Hasok Chang on the very simplest of molecules - water. Prof Chang is the Hans Rausing Professor of History and Philosophy of Science, University of Cambridge.

Well known for his work in examining historical aspects of science, Prof Chang described the story from the 18th century, which eventually arrived at the acceptance of water as being H2O. We casually accept this fact, but it was a terribly difficult thing for scientists to learn originally.

The story begins with the chemical revolution of the late 18th century, with Lavoisier (1743-1794). His suggestion that water was a compound of oxygen and hydrogen flew in the face of the traditional wisdom that it was an element. He also questioned the validity of the widely accepted 'phlogiston' theory, from the Greek for 'burning up'. 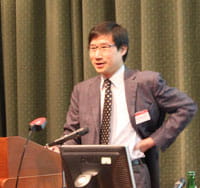 His views were not popular with some contemporary scientists, notably the English chemist, Cavendish (1731-1810), whose experiments had taught Lavoisier how to make water from hydrogen and oxygen, Cavendish continued to believe that hydrogen and oxygen were merely water with an excess or a deficit of 'phlogiston'. Priestley (1733-1804) had also made oxygen before Lavoisier adopted Cavendish's view of water and defended it until his death.

When Volta developed the first battery in 1800, it became possible to electrolyse water into hydrogen and oxygen, but even that failed to produce a complete consensus. Disputes about the mechanism of electrolysis continued throughout the 19th century. And deciding that water was a compound was by no means the end of the story.

Dalton published his atomic theory in 1808; giving the formula HO followed three years later by Avogadro's H2O formula. The majority of chemists rejected this, and it took half a century of debates, and eventually insights from organic chemistry, before consensus was reached on the modern set of atomic weights and molecular formulae including H2O.

Following the lecture, the question and answer session continued beyond lunch, ending a most enjoyable session for the many participants in what might become a regular SCI event.