Sir Mark Walport delivered his Public Evening Lecture at SCI in February on ‘Science and Business: Preparing for the Future’, at a moment where the strength of the science, business, and political sectors are being tested by numerous global challenges.

From the multifaceted fight against climate change to the current outbreak of COVID-19, they are tasked with providing an array of workable solutions to myriad issues, against a setting of growing population and political upheaval worldwide.

As the first and current Chief Executive of UK Research and Innovation (UKRI), the umbrella body bringing together the UK’s seven Research Councils, Innovate UK, and Research England; former Chief Scientific Advisor to UK Government (2013–2017); and Director of the Wellcome Trust for ten years prior to that – who could be better placed to discuss the landscape for science and business, recent progress and, importantly, how we move forward, than Sir Mark Walport?

By way of introduction, Sir Mark joked, ‘Researchers tend to go in two directions. Some focus on a very narrow topic and know more and more about less and less until, ultimately, they know everything about nothing. I’m in the other category, who know less and less about more and more!’

The world of research and business, he said, is changing. While the key driver of the First Industrial Revolution was the steam engine, today’s ‘Fourth Industrial Revolution’ is being driven by advances in computing. Servitisation is seeing the services offered by a product become increasingly more valuable than the product itself.

‘We are now doing things at the scale that were inconceivable when I began my career,’ he said. ‘Even in 2003, as Director of Wellcome Trust, the sequencing of first human genome had taken some 15 years. No one then could have imagined that we would have celebrated the 100,000th sequenced genome already.’

The fact that scientists had sequenced the novel coronavirus COVID-19 within weeks of the outbreak is testament to this remarkable advance in capability, he said, adding that the cost of sequencing a genome has reduced from well over $1bln to less than $1,000 today.

Advances in computing have reduced the cost and time of genome sequencing at a remarkable rate.

And genome editing, which owes a debt to the field of astronomy, which pioneered the handling of huge datasets, illustrates the multidisciplinary nature of scientific progress.

‘The tools of genome editing have come from the world of microbiology, where the environment in which viruses and bacteria find themselves in means that they get infected, and selected pressures have meant that microbes with different sorts of weapons effectively cut up each other’s DNA. Those chemical tools are what are now being used for genome editing, which of course has importance for crops, which we will need to create in the harsher conditions we are creating for ourselves’.

Using an illustration of a recently devised bionic leg, Sir Mark gave another example of how modern technologies characterise the multidisciplinary nature of the industrial revolution we are going through, where in this case computing, materials science, and biological interfaces with technology are being combined through innovation to vastly improve people’s lives.

Sir Mark also noted that the key players in innovation extend beyond the acronym ‘STEM’ (Science, Technology, Engineering and Mathematics). ‘I prefer to talk about STEAM, which includes the arts. If we’re going to tackle many of the challenges we face, we need the arts, social sciences, and design, at least as much as we need the sciences.’

In order for the UK the maintain its position as a globally competitive economy, he said, the country must be a world leader in innovation as this Fourth Industrial Revolution progresses.

UKRI is a key network enabling the UK to keep punching above its weight. In three words, Sir Mark describes UKRI’s mission as ‘knowledge with impact’. There is welcome cultural public interest in the gathering of knowledge by science, he said, but taxpayers and citizens also want these findings to be applicable and useful. UKRI plays a key role in catalysing innovation to turn such advances into real-world benefits for society.

The agency is funded by government and in turn provides funding to countless research projects and facilities throughout the UK. They include quantum technology hubs, which apply cutting edge quantum physics to important technologies such as miniaturised clocks and optical detectors; partnerships with the plastics industry based upon improving the sustainability of its products; and regional industrial and research clusters, which allow academic institutions and business with strengths in specific, related disciplines to be locally grouped for mutual benefit, while also aiming to address the disparity of economic activity from region to region. 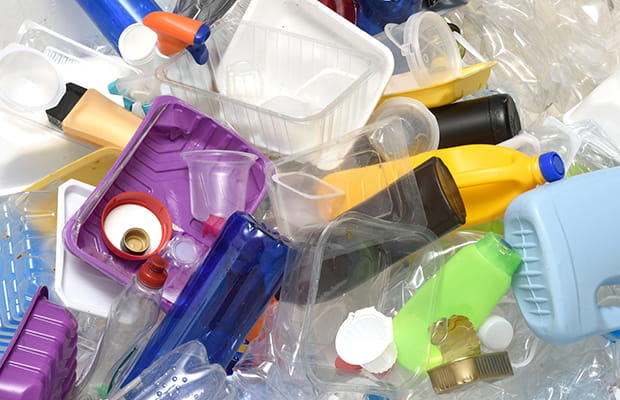 UKRI is working with the plastics industry to address sustainability issues.

A good funding agency, he said, does not simply wait for grant applications to arrive. ‘We need to do much more, to work with communities and help them to identify and tackle important research and innovation challenges’.

Sir Mark also highlighted UKRI’s UK Smart Funding scheme, which offers smaller grants to innovation on a smaller scale, at the point of risk where the private sector is less willing to fund it. ‘It’s not our job as taxpayers to subsidise industry’, he clarified, ‘But there is a level of research and innovation that is very risky, and that’s where the public sector has to support.’

We are a small but important country, he concluded. ‘Our future depends on research and innovation.’