Precision medicine is often described as a new or emerging approach that will revolutionise healthcare, but it might be more accurate to describe it as an advancement on existing practice: after all, health treatment is already, where possible, personalised – according to environment, genes, and lifestyle – to maximise each patient’s outcome.

It is, however, a significant advancement. Considering a patient’s family history or diet is not the same as tailoring a treatment approach exactly to the patient’s genetic makeup and disease type, and the successes can be remarkable: ivacaftor, for instance, developed by Vertex Pharmaceuticals, treats the underlying causes of cystic fibrosis in patients with G551D mutations in the CFTR gene (around 5% of cases). It is considerably more effective and convenient than conventional approaches that focus on symptoms.

The successes of precision medicine have led to widespread enthusiasm and investment. When President Obama announced the USA’s precision medicine initiative in 2015, he claimed that it ‘gives us one of the greatest opportunities for new medical breakthroughs that we have ever seen’. 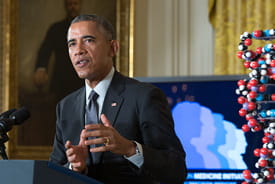 The UK government is also investing. Six regional centres of excellence for precision medicine were established by Innovate UK in 2015 to develop innovative technologies for healthcare, in Belfast, Cardiff, Glasgow, Leeds, Manchester, and Oxford, in addition to the Cambridge-based Precision Medicine Catapult technology and innovation centre. It has also been highlighted as an area of focus for the Industrial Strategy, with an extra £210m of funding announced as part of the 2017 white paper. The UK’s research strength, combined with NHS evidence, is seen as a major opportunity in this area.

Precision medicine is perhaps most common in oncology, where it is considered a leading innovation in treatment. Drugs designed to focus on specific tumours and molecules are regularly used to treat cancer patients. Radiomics, the practice of assessing tumour phenotypes through the analysis of quantitative features from medical images, is considered a crucial step forward in the field, as it enables doctors to better guide therapies and predict responses.

A collaborative project between the Moffitt Cancer Center and Dana-Farber Cancer Institute is using radiomics to non-invasively assess the molecular and clinical characteristics of lung tumours. Dr Robert Gillies, Chair of Moffitt's Department of Cancer Imaging and Metabolism, explains the approach, ‘The core belief of radiomics is that images aren't pictures, they're data. We have to treat them as data. Right now, we extract about 1,300 different quantitative features from any volume of interest’. More information on this development is available here.

Another complex disease that could be revolutionised by precision medicine is diabetes, one of the fastest growing global health challenges. Researchers from the University of Sydney's Charles Perkins Centre have identified three specific molecules that accurately indicate insulin resistance, or pre-diabetes, particularly when present together. Professor James, the senior author, believes that, ‘Once we can identify the molecules and other factors that contribute to pre-diabetes, we can customise treatments to suit patients' specific make up and needs’. The study is available in the Journal of Biological Chemistry.

A note of caution

There are, however, concerns about the approach. Precision medicine can be extremely expensive – ivacaftor, for example, costs US$300,000 per year, per patient. Moreover, it only works on the 5% of patients with G551D mutations in the CFTR gene.

Another major concern is about the data on which precision medicine research applies. A study led by the Translational Genomics Research Institute, USA, suggests that the current approach in oncology is ‘more precise for those of European decent, and less precise for those whose ancestry is from Latin America, Africa and Asia’. Patients from underrepresented backgrounds risk being misdiagnosed and provided with inappropriate therapies, say the team. This study is available in BMC Medical Genomics.