The long-awaited Blue Planet II brought viewers on an enchanting journey through the oceans, with jaw-dropping photography capturing this hidden world, from the darkest depths to coral reefs and coasts.

But the show also sparked a national conversation about plastics in the ocean, and has even influenced policy – Environment Secretary Michael Gove told reporters in December that he was moved by the scenes in Blue Planet II, which featured marine life struggling to cope with the impact of plastic litter in the oceans. In Defra's 25 Year Environment Plan, released today, is a pledge to eliminate all avoidable plastic waste within a quarter of a century.

In the final episode of Blue Planet II, we met Dr Jon Copley, who is Associate Professor in Ocean Exploration & Public Engagement at the University of Southampton. Jon was scientific advisor for Episode 2 (The Deep), which included providing some of the footage shown of deep-sea vent animals, from NERC research projects he was involved with.

Jon also took part in a month-long shoot in the Antarctic, which was shown in the incredible opening of The Deep episode, where Jon and his fellow researchers travelled in a minisub 1km deep into the Antarctic ocean.

We caught up with Jon to find out about the real-world benefits of exploring our oceans, why communicating science matters, and more.

JC: We’ve actually had the technology to explore the Antarctic deep sea with human-occupied vehicles for several decades – Cousteau went there in the early 1970s with his ‘flying saucer’ minisub, which had a depth limit of 400 metres.

But dives by human-occupied vehicles depend on a fairly narrow window of wind, sea, and ice conditions. So the cost of sending such technology to the Antarctic can be a gamble – there’s a risk of not getting many suitable days for sub dives.

Fortunately, better information from satellites monitoring wind, sea, and ice conditions throughout the area allows more careful and adaptive planning of operations – and we depended on that during the Blue Planet II expedition. By being able to choose dive targets in more protected areas, there were only a couple of days when conditions prevented us from launching the subs. And of course the experience and professionalism of the ship’s crew and sub team were key to that success. 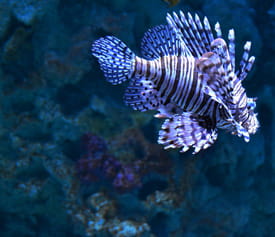 SCI: What are the real-world benefits of exploring the deep oceans?

JC: We can learn from the ingenuity of nature in the deep ocean – for example, an antifreeze protein now synthesised to improve storage of ice cream products comes from a deep-sea eelpout fish; materials scientists are investigating the damage-resisting properties of the shell of the ‘scaly-foot snail’ (a new species that I was co-author in describing) to design better crash-helmets, body armour and pipeline protection; there’s a new treatment for early-stage prostate cancer based on the light-sensitive behaviour of bacteria from the ocean floor; and possibly even eye drops in development to treat night blindness, from studying how dragonfish hunt in the inky depths.

SCI: What can we do in our daily lives to protect our oceans, and what role does industry have to play in this?

JC: We don’t each have to become paragons of virtue – just a simple change or two that we can easily make into new habits will help to make a difference for the future of our blue planet. Those changes can be things like carrying your own drinks mug with you instead of needing single-use cups, or getting the ‘sustainable fish app’ from the Marine Conservation Society to help to decide which fish to eat.

But it’s more challenging where our everyday lives are more connected to the oceans than we realise. For example, an average family car produces around 40 milligrams of microplastics per kilometre from tyre wear, and some of those microplastics inevitably end up in waterways and the ocean. So a public transport policy that gives people real alternatives to personal car use, in terms of cost and convenience, is also a policy for a healthy ocean. And employers who support teleworking where possible or appropriate are also actually supporting a healthier ocean.

SCI: You co-founded SciConnect, a company to train scientists to share their research with the wider public. Do you think that scientists are more conscious today of the importance of communicating their science to a broad audience – and is the public more engaged with science?

JC: Being able to share specialist knowledge with people outside your specialism is essential for scientists to work with colleagues in different disciplines, interact with people in other roles across organisations, report to stakeholders and clients, inform policymakers and practitioners, engage with the media, inspire the next generation – if anything, it’s a more common activity in most scientific careers than just sharing research with peers in your own field. So I think that scientists today are very aware of the value of developing the underlying skills for all those applications.

But it’s a set of skills that are not routinely taught by experienced practitioners as part of scientific training, which is why I co-founded a company to do that, with colleagues who work day-to-day in science communication as writers, broadcasters, and presenters, and who have backgrounds in science so that they appreciate the needs and perspective of those they are training.

Fundamentally, engaging people with your research involves understanding your target audience – for example, the approach that you would take to inform policymakers about the consequences of a research finding is different to how you might try to inspire young people’s interest in science through your work, which makes us realise that there isn’t really a homogeneous ‘public’; outside our own area of specialism, we’re all members of ‘the public’ when it comes to finding out about research in another field.

SCI: Now that the Blue Planet II is over, how would you recommend bereft viewers fill the void?

JC: There are some great ways for anyone to continue pursuing their interest in marine life – for example, there’s the Capturing Our Coast project, which is building a nationwide community of volunteers who get together to survey shores, which helps to monitor changes in distributions of species around the UK.

The University of Southampton also runs a free ‘Massive Open Online Course’ about Exploring Our Oceans, which covers the history, science, and relevance of the oceans to our everyday lives. It’s not a formal course, so there aren’t any exams, and no science background is required – just an interest in finding out more about our ocean world.

So, there you have it – from crash helmets to cancer treatments, exploring the deep allows us not only to learn more about the blue planet, but the land above it, too.

If you’re interested in learning about how our water and waste is analysed and treated, SCI’s Environment, Health and Safety group is running this event at our London headquarters in March 2018. Early bird fees available until 30 January.