Five things you never knew about pesticides and climate change

On 6 March our Agriscience group will be hosting an event on the Impacts of Climate Change in Agriculture. Dr James Garratt, is a member of SCI’s Agrisciences Group and the organising committee of the event, as well as the Managing Director of Enviresearch. He has a passion for the assessment of the risk of chemicals to the environment. Today he talks specifically about pesticides, and how they are interlinked with climate.

You are a student of some agricultural discipline and suddenly you are asked a question about climate change.  ‘It’s going to get warmer in general,’ you start to say, ‘More variable with bigger storms and droughts.’

You sound confident, but deep down you know that you’re not so sure about what will happen to pesticides.  Will everything be better in the future?  You need some hard science to you can make up your own mind - with so little time, where will you find that science? Help is at hand!

Here are five facts to give you all you need, to sound like the expert that you want to be.

Chemical reactions do go faster at warm temperatures.  In terms of pesticide dynamics, there is some consensus that for a 10°C rise in temperature, the pesticide transformation rate will go up by a factor of around 2½.  So you would expect that pesticides would degrade faster in Spain than in Sweden.

Have a look at the picture from the Atlas of the Biosphere: the difference in temperature is around 15°C, so that links to a four-fold increase in reaction rate between southern Sweden and southern Spain. 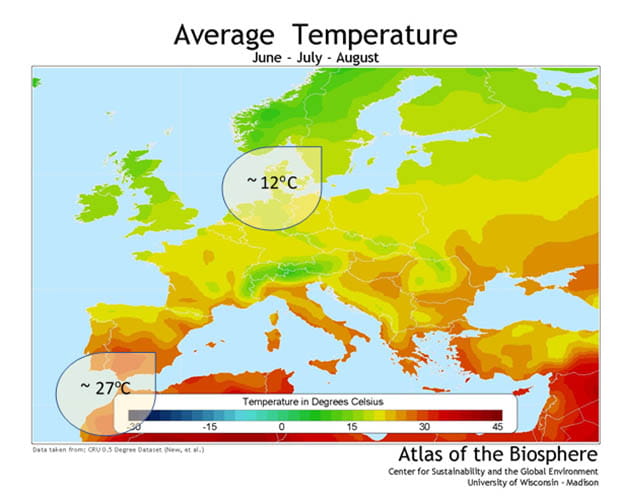 Image: Atlas of the biosphere

Multiply those factors together and what do you get?  The rates in Spain are four times faster due to temperature but five times slower due to moisture.  The reaction rates may actually be faster in Sweden! 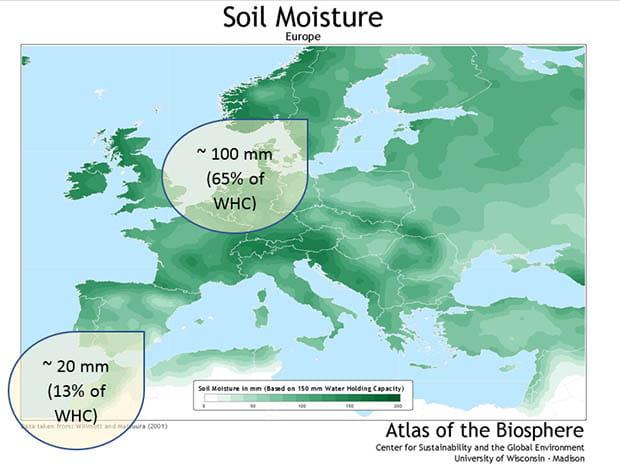 Image: Atlas of the biosphere

Now, that was a pretty extreme example and some of the approximations need a good deal of refinement.  But hopefully you get the idea.  You have to consider both temperature and moisture when you think about pesticide reaction rates in soil.

We all know that to dissolve more of something (salt, say), you put the pan on the cooker.  It works a treat.  But if you place a large body of water, like a lake, in a slightly warmer climate, the amount of pesticide in it will go down slightly.  Why is that? 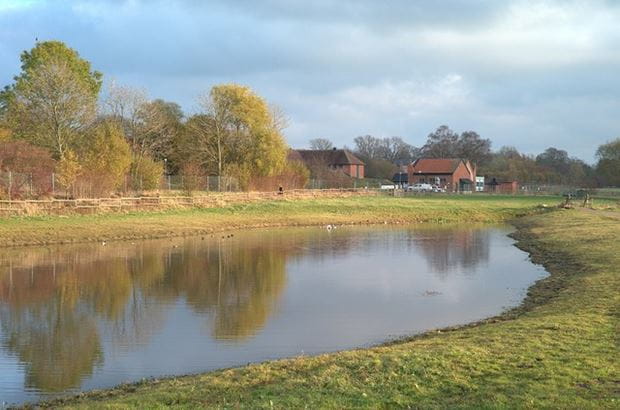 Warm a pond and you drive pesticides out of the water into the air. Image: Sigfrid Lundberg/Flickr

It is because substances tend to get more volatile, the more that you heat them up.  So volatilisation is a balancing act between vapour pressure and solubility, a balancing act that we often call ‘Henry’s Law’ - you can find all about it on Wikipedia, YouTube and many other sources.

At a fixed temperature and pressure, there is a constant ratio of concentrations in the air and water phases.  But change the temperature and the ratio changes too, and more of the substance ends up in the air phase.  That, you can read about using Erik Krogh’s excellent course materials.

It all depends on how much the temperature affects both the solubility and the vapour pressure.  The technical terms for these are the ‘Enthalpies of Dissolution and Vapourisation’, usually expressed on a molar basis.  The effect on solubility or vapour pressure is proportional to this number.

For pesticides, there are only a few studies that investigate this, but if you don’t know any better, you can say that the Enthalpy of Dissolution is around 27 kJ/mol and the Enthalpy of Vapourisation is around 95 kJ/mol – you can read about that on the webpage of the model developers for the PEARL pesticide model. As the value for vapourisation is higher than the value for dissolution, then the effect of temperature on vapour pressure is greater than the effect on solubility.

Losses to the air are really small for most pesticides, and contamination of water is usually a bigger concern.  But it is still interesting to note that pesticides tend to leave hotter water and head up, up and away into the atmosphere.

Leaching is what we call the process when water that trickles through the soil takes pesticide with it, on a journey that can end at the water table.  In Europe, colder weather is often associated with wet weather, so you would expect the excess rain to carry the pesticide on its journey all the more.  This is normally true.  However, there are two situations where this would be false.

This is quite common in Scandinavia, while Eastern Europe has a fair chunk of it too.
The ground freezes, all precipitation is solid and nothing moves anywhere.  However, when things start to warm up a bit, there could be a fair abundance of water trying to percolate through.  The question is; will the ground stay frozen long enough so that the water runs off before it ever gets into the soil? 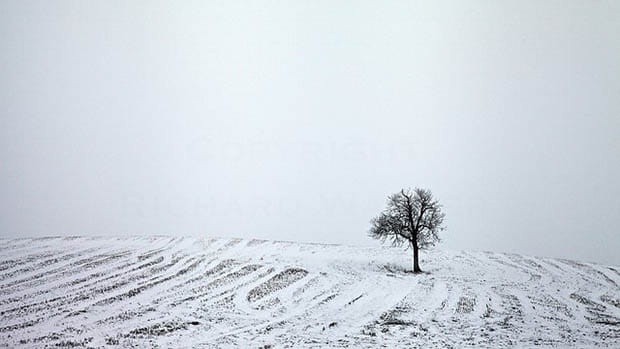 2. Cold weather can pull pesticide out of the water

The amount of pesticide in the water is balanced with the pesticide stuck to the soil – we usually call this sticking ‘sorption’.  We don’t have all the details, but several studies indicate that when the temperature drops, the balance swings away from the water and towards the solid.  That means there is less available for leaching.  This graph shows the effect very neatly.  Steep slopes on the graph mean more sorption is happening.  The slopes at low temperatures (4.5°C) are considerably greater than the slopes at high temperatures (37°C). 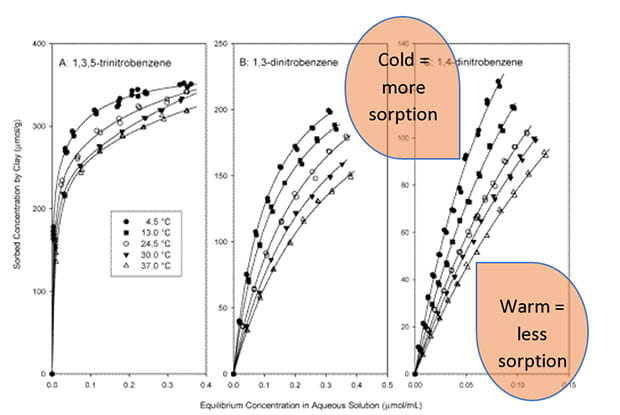 The effect of temperature on sorption of nitrobenzenes.  Image: Li et al. (2004)

So, as long as you just drop the temperature and the rainfall does not go up, then the leaching will reduce.

At least, not necessarily.  If you don’t have any rain, then you won’t have any water running off either.  If you have a little rain, then this will percolate into the soil, possibly moving a bit of pesticide with it.  But what about heavy rain?

In this case, you have several different factors.  First of all is the state of the soil – is it easy for the water to penetrate? Soil crusts make penetration difficult, while heavy clay soils are naturally resistant and very wet soils have no space for new water.

Secondly, you have the slope: steeply sloping land will lead to runoff earlier in the rain event than gently sloping land, although the total amount may be the same.  Thirdly, you have the pattern of rainfall.  If it all falls at once, runoff will be much more likely, because there won’t be time for it to soak in.

The pattern of rainfall intensity is called the ‘erosivity’ of the rain.  Erosivity refers to movement of solid bits of the soil that may contain pesticide, but it works sufficiently well for water and dissolved pesticide too.  If you take the average erosivity over a long period of time, you can build a map of where erosivity is generally highest.  These are not the same as maps of where rainfall is highest. 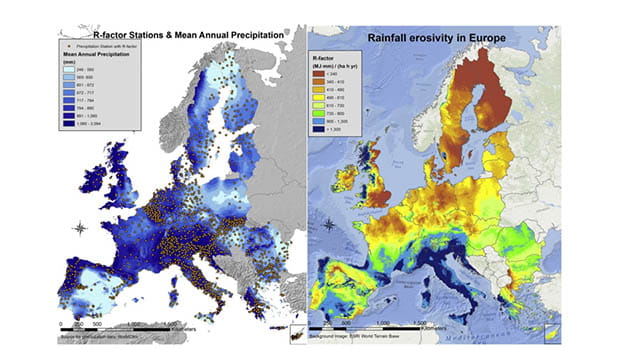 There are some pretty wet places with low erosivity, such as Ireland, Denmark and Northern Germany.  Some dry spots in Spain and southern Italy have high erosivity.  The places where storms are most significant are along the western coastlines and across southern Europe.  If we forget the soil type and slope and even the pesticide usage pattern for a moment, then it is these places that are most likely to generate pesticide runoff.

There is a clear consensus that the climate is changing.  Some of the key features of the climate of the future in Europe include warmer, wetter winters and warmer, drier, stormier summers.  The climate influences a range of agro-ecological features, for example the timing of the infestation or infection (and indeed the species of pest); the rate of plant growth; and the soil conditions, such as the organic carbon content, the moisture status and the extent of cracking.

Climate change scientists have catalogued a wide range of likely human responses to these changes from a range of perspectives and from this we can easily interpret the impacts of the current climate. 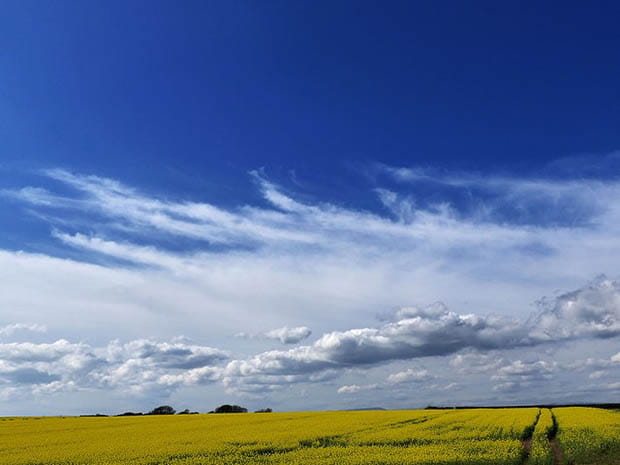 Would you choose to sow oilseed rape?  It partly depends on the climate. Image: Simon Rowe/Flickr

The human responses to the agroecological scenario can be summarised as a list of choices:

The indirect effects of climate on pesticide fate can be considered as a tension between the twin societal drivers to maximise production while maintaining environmental safety.   Will the indirect effects will outweigh the direct effects?  I think they will and I am not alone.  I agree with the statement of Bloomfield and co-workers from 2006:

‘In the long-term, land-use change driven by changes in climate may have a more significant effect on pesticides in the environment than the direct impacts of climate change on specific pesticide fate and transport processes,’ the statement reads.

So, the biggest effect of climate change on pesticide fate is not physics and chemistry but a series responses of farmers, consumers, producers, retailers and politicians in how we all decide to react to the changes.