Can solar geoengineering help mitigate the impact of climate change?

The effect of solar geoengineering techniques on climate change will no longer just be a theory, with the first real-world experiment set to begin later this year.
Georgina Hines

Floods, droughts, heatwaves and natural disasters are just a few of the well documented effects of climate change, that result from rising global temperatures. The 2015 signing of the Paris Agreement aimed to limit the global temperature increase to 1.5⁰C, but this target is already at risk, with the majority of signatories failing to keep to their pledged targets.

Several innovations are already in practice or in the pipeline to move the world towards a zero-carbon economy. While solar geoengineering does not promise to reverse the effects of climate change or directly work to address its root cause, these technologies could work to manage its negative impacts in the meantime.

Solar geoengineering works in two ways – it reflects a small fraction of sunlight that reaches the Earth back into space or it attempts to increase the amount of solar radiation that escapes back into space.

There are several proposed techniques that are currently being developed. These include:

Building on four decades of research at Harvard University, US, the Stratospheric Controlled Perturbation Experiment (SCoPEx) aims to improve the understanding of the benefits and risks of large-scale solar geoengineering models.

SCoPEx consists of a scientific balloon that will release stratospheric aerosols, such as the non-toxic, natural chemical calcium carbonate, over a period of 24 hours. The experiment will use or adapt high-performance sensors and flight-system engineering experience developed to serve the purpose of SCoPEx.

Initially, the researchers plan to release ice as a control to test whether the equipment is performing correctly, before spraying calcium carbonate particles into the atmosphere, which are hoped to reflect sunlight back into space. It is expected that the experiment will mimic the natural effect of a strong volcanic eruption.

Solar geoengineering research has primarily taken place in the laboratory or using computer modelling, and the Harvard team now want to use this experiment to improve their knowledge on how this technique could work on a larger scale. 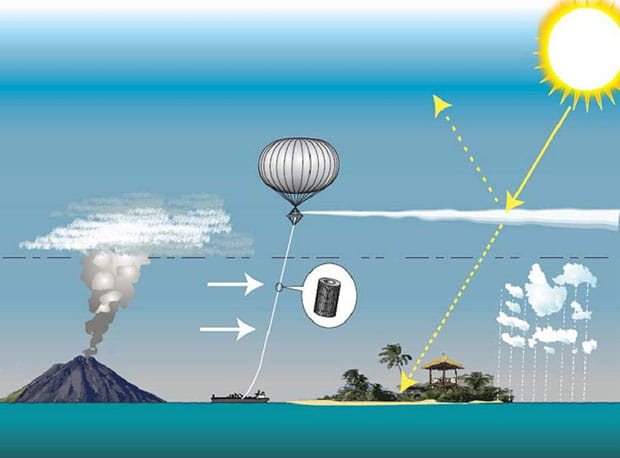 The team have stressed that this research is an experiment and not a test, which they say is synonymous with a late-stage product that aims to prove the validity of a system, rather than a concept. SCoPEx is about building understanding of solar geoengineering and its impact on the atmosphere, and not about preparing the technique for commercial deployment.

Currently, there isn’t a date or location set – although sights have been set on New Mexico, US as a potential site – as the governance of the project is controlled by an independent advisory committee.

‘SCoPEx is the first out of the gate, and it is triggering an important conversation about what independent guidance, advice and oversight should look like,’ said Peter Frumhoff, Chief Climate Scientist at the Union of Concerned Scientists and a member of the advisory committee, to Nature. ‘Getting it done right is far more important than getting it done quickly.’