SCI’s Energy group recently met to discuss the latest technologies in the sector, to help develop a new model for alternative energy scenarios for the UK. Speakers from the Energy Technologies Institute (ETI) were on hand to educate delegates on current opportunities for affordable and sustainable energy sources.

A popular choice for decarbonisation is combined cycle gas turbines, said Dennis Gammer, Strategy Manager of Carbon Capture & Storage at ETI. The flexibility, efficiency, and low capital cost of the technology makes it an attractive choice for industry.

Combined cycle gas turbines generate mechanical energy from waste heat – including carbon emissions – that can be converted into steam. When passed through a heat recovery steam generator, the heat generated from the steam can be put back into the process.
Gammer also introduced the group to a new technology straight out of the US – NET Power, a new type of power station designed for CO2 capture, with no steam involved. ‘The difference here is that the only products of combustion are CO2 and water’, with the former ready for storage, he said.

Equipment size is reduced dramatically compared with other available carbon capture technologies and works at 58.9% efficiency. However, due to the novelty of the technology, ‘we do not have a lot of experience with the alloys needed,’ Gammer said.

Next up – to discuss the role of nuclear power – was Mike Middleton, Strategy Manager of Nuclear at ETI. With the government’s objective to have a decarbonised economy running by 2030, the UK has 10 years to prepare for a low carbon transition, he said. 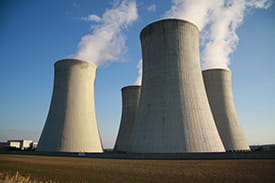 Small Modular Reactors (SMRs) are considered to be a viable alternative to providing combined heat and power in the future. SMRs are a type of nuclear fission reactor used at nuclear power plants to produce electricity. Their small size means that location is flexible and there is lower initial investment into the technology.

Support for SMRs was confirmed by the government during the 2015 Autumn Statement, when former Chancellor, George Osborne, announced a £250m scheme into nuclear research and development, which included a competition to find the best-value SMR design in the UK.

Middleton said that ETI worked hard to produce evidence for this, in terms of whether it was credible for the UK to have such a programme. ‘Decisions had to be made’ to bring the technology forward, he said.

But Middleton says that nuclear energy should only be relied on if there is a market need. ‘Public support is really important for these technologies,’ he said, due to the controversial nature of the sector.