The SCI Electrochem Postgraduate Conference, SCIEPC 2015, took place at Newcastle University on 8 June 2015 and allowed postgraduate students studying in the field of electrochemistry to present their work either as a poster or an oral presentation to fellow students in a friendly atmosphere. 30 delegates (postgraduate students and postdocs) from both Chemical Engineering and Chemistry departments were in attendance, having travelled from Newcastle University, University of York, University of Strathclyde, and even as far as University College London. The event gave participants an opportunity to discuss their work with one another, creating future networks and discussing possible research collaborations.

Funded by SCI, and organised as well as chaired by Simon Coleman, the Student Representative of the SCI Electrochemistry Technology Group, further sponsorship was provided by Alvatek, who also attended the event.

Simon Coleman opened the conference by introducing SCI and highlighting its main aims and objectives. Information was also given about the SCI Electrochemical Technology Group and how it aims to bring electrochemical technologies to market and support the development of applied electrochemical science in academia. Students were made aware of SCI and they were encouraged to join SCI ECTG, by explaining the many benefits that membership confers. 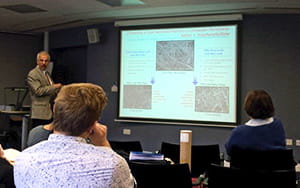 It was a great privilege to welcome special guest speaker Prof Peter Pintauro from Vanderbilt University, who kicked the event off with a fantastic keynote presentation. Funding to cover his travel costs was kindly provided by Paul Shearing, from the Research Network.

Prof Pintauro gave a very energetic and inspiring talk on ‘Nanofiber-based Membranes and Electrodes’ and the use of new electro-spinning techniques. The talk received many positive comments from students who enjoyed the keynote presentation.

The students were then given the chance to present their own work. A variety of different topics were covered, from fuel cell technology to electrochemical studies for DNA Biosensors. Everyone was engaged in much discussion following each presentation and an enjoyable and informative day was had by all.

Catering staff at Newcastle University provided coffee refreshments during the day, as well as a delicious buffet lunch. Plenty of time was allowed for poster sessions, which took place during the breaks. This gave students time to network and discuss their work over a coffee.

Alvatek kindly provided funding for one of the coffee breaks. The Director of Alvatek, David Sheath, who also attended the event, presented an exhibit at the conference and gave a short demonstration of some state-of-the-art electrochemistry equipment. This gave students an opportunity to converse with someone from industry, as well as people from academia. David Sheath was also on hand to give helpful advice on equipment and electrochemistry experiments. 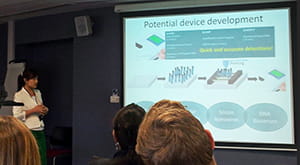 Finally, prizes were given to the two students who gave the best oral presentations during the day. The winners were post-graduate students from University College London: Mailis Lounasvuori and Siti Zakaria. Mailis gave an interesting talk on the influence of edge functionalities on the electrochemical performance of graphene nanoflakes, whilst Siti gave a very informative presentation on electrochemical and spectroscopic studies of iron sulphides for CO2 reduction. Their award (provided by SCI) consisted of free registration at Electrochem 2015, held at Durham University on 13-15 September. The two winners will also present their work as an oral presentation at the Electrochem conference.

The conference concluded with a special social event, held in a private function room in the university. This gave the opportunity for further interaction between the postgraduates. Drinks and light refreshments were provided, along with musical entertainment by a Newcastle-based band, AlterCosmos who played Catalan and Spanish influenced tunes. Prof Sudipta Roy also joined in the musical concert by performing one of her favourite Indian songs. The conference was a great success, with positive feedback from the postgraduates. It’s hoped that a similar event will take place next year at UCL.