Ke Xu Zhou was awarded a Seligman APV Travel Bursary in 2015. Below he reports on his attendance at the 12th International Congress on Food and Engineering which took place 14 - 18 June in Quebec and tells us how the connections made at the conference would not have been possible without the support he received from SCI and the Seligman Trust.

‘Attending the 12th International Congress on Food and Engineering in Quebec City was a fantastic experience. This was my first formal encounter with a meeting of this scale and nature and as the second year of my PhD comes to an end, the timing for attending this conference could not have been better.

‘The opening ceremony was mildly disappointing due to the slow pace of the awards ceremony, but the networking session was a very good ice breaker to meet fellow delegates. The first plenary session was delivered by Professor Paul Singh the following morning. He gave an inspiring talk on how to educate the next generation of food engineers; how the advances in technology have affected the way we learn and interact with our surroundings.

‘My oral presentation was scheduled on the first set of special interest sessions that morning and the talk was entitled ‘Investigating the molecular basis for adhesion of bacterial spores to inert surfaces’. Bacterial spores are formed as a result of the survival mechanism in Bacillus and Clostridium species. These structures, formed in response to nutrient limitation during regular growth conditions, are metabolically dormant and extremely resistant to various forms of environmental stress that would otherwise be lethal to vegetative cells. Bacillus cereus is a major concern to the dairy industry; these spores are highly adherent and can still be found on equipment that has undergone cleaning and disinfection procedures. My talk focused specifically on the influence of hydrophobicity in the adhesion of Bacillus spores. Within the short amount of allocated time, I was able to show that with diminished hydrophobicity, spores would become increasingly less adherent to the extent that they would simply ‘peel-off’ with a drop of water sliding over them. 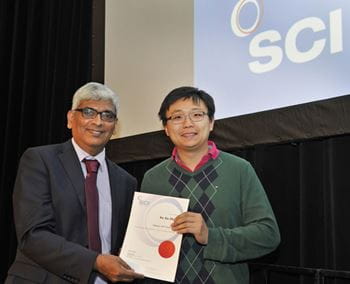 ‘After my presentation, I was rather surprised to be approached by a Professor who handed me his business card and said that he was interested to chat about my work. Later I learned that their group were working with bacterial spores in a very similar way; they were studying the influence of hydrophobicity on the spores’ resistance to inactivation by hydrogen peroxide. Throughout the conference we had several enjoyable discussions, exchanging a variety of ideas that will, I’m sure, be part of my final year’s research work. Such encounters are very unlikely to take place without stepping outside the usual academic environment and the connections that I made at ICEF12 were possible thanks to the support offered by SCI through the Seligman APV Travel Grant.

‘The conference hosted over 600 attendees delivering over 200 oral presentations and 500 posters. The sheer volume of high quality research is humbling. On the other hand, it also serves to boost intellectual curiosity, critique and capability - being able to quickly switch topics of discussion and taking in information from various areas of research is a skill that will surely be beneficial to any future career considerations. One very memorable poster was on modeling heat transfer in cooking turkey with and without stuffing; it turns out that it is safer to cook turkey without the stuffing although you will miss out on being able to enjoy that delicious stuffing!

‘Overall the conference has been an extremely positive experience, not to say that the location was fantastic. Quebec City is a truly beautiful and historic city and we had our fair share of sunshine and rain. All I can say is, I look forward to Australia in 2019!’