Aphids cause considerable harm to a variety of crops each year due to damage from feeding and the transmission of viruses. Effective, conventional pesticides that are authorised for use are in continuous decline; simultaneously many of the current biological pesticides fail to meet required efficiency. Increasing demands for improved food security mean that a solution for this problem is needed. Plant surfaces are well known to provide a niche for many bacteria. Some species of bacteria possess pathogenic qualities and are known to kill or incapacitate insects. Therefore there is the potential for the discovery of a direct bacterial application, or the opportunity to manipulate the crop environment in order to encourage the colonisation of these beneficial bacteria.

Within my project I have identified several naturally occurring bacteria that are able to kill a variety of aphid species, and could act as a potential bacterial pesticide. It is important that these bacteria are fully characterised in terms of host range as it is important that they are not detrimental to the survival of beneficial insects. Bees are of a particular interest to this project as they are not only an integral insect in plant ecosystems and lifecycles; they are also at risk of negative effects from pesticides. The recent controversy surrounding the use of Neonicotinoids has highlighted how important protecting bee populations are to growers and the general public

Academics at the Superior institute for biotechnology in Sidi Thabet Tunisia have a working bioassay system that allowed me to test the pathogenic bacteria against bee larvae, thus evaluating the potential threat the bacteria may pose to the existing UK bee population. These key results can be added to results seen from other experiments exploring the pathogenic bacteria's host range. These experiments have used a variety of insects such as Lepidoptera and Mamestra, both caterpillar species, and several different beetle species. Insofar the bacteria have had no pathogenic effects on any other insect than aphids.

Quantifying CFU per ml
A single colony of bacteria was selected from an LB plate and used to inoculate 100ml of LB. This was incubated, shaking at 27°C overnight (12 hours).

A dilution series was made from the original broth to 10-7 and 10 µ was spotted on to LB agar plates. These spots were allowed to dry and then were incubated at 27°C overnight. After the incubation period the plates were recovered and the colonies formed counted at the most appropriate dilution (able to count between 30-100 colonies per spot). From these CFU's it was then possible to calculate the amount of broth required to obtain the required CFU per ml for the experiments.

Preparation of virulence assays.
10µ of uninoculated BLD was added to each well of a 96 well plate. Bee larvae that were between 1-2 days old were selected and removed from the comb, (that had been removed from the hive and all adult bees removed), they were transferred to the 96 well plates containing 10µ of diet. Great care was taken during the transferral process as the larvae are very delicate to touch. Once all the larvae needed had been transferred to the 96 well plates, 10µ of inoculated diet was added to the larvae. The larvae were inoculated for 24 hours at 35°C. After the incubation period the larvae were removed from the incubator and inspected for death, this was indiacated by no increase in size from the previous day, and a change in colour from pale cream to a brown. Any excess diet remaining was removed from the well, and 20µ of fresh diet was added. The larvae were once again incubated for 24 hours, and the process - examination of death, and refreshment of diet - repeated the following day (Hamdi et al. (2013), Genetic and Biochemical Diversity of Paenibacillus larvaeIsolated from Tunisian Infected Honey Bee Broods).

Royal Jelly
A sterile swab was used to spread a bacterial lawn over an LB plate. Two small circles were cut from the centre of this plate with roughly 2cms gap between each circle. 300µ of the BLD was added to the wells in the agar. This was incubated for 24 hours at 30°C, the same temperature as the virulence assays were performed at.

Honey
A sterile swab was used to spread a bacterial lawn over an LB plate. Four small circles were cut from 4 quarters of the LB plates. Four dilutions of honey were made in order to aid the diffusion of the honey in to the agar plate. The four dilutions used were 100% pure honey from the comb 75%, 50% and 25% pure honey combined respectively with 25%, 50% and 75% of sterile water. 300µ of each dilution of honey was added to each of the four wells cut in the plate. The plate was then incubated at 30°C for 24 hours.

Plates were checked for signs of inhibition after the 24 hour incubation period.

Virulence assays
The larvae were fed the inoculated diet on day 0, and non inoculated diet on subsequent days for 7 days. Each day they were checked for signs of illness or death, dead larvae were removed from the 96 well plates each day. At the end of the 7 day observation period there was no difference in the numbers of dead larvae in the control population vs the test population in any dilutions. Some death was observed in both the experimental and the control populations due to mechanical damage of the larvae. Meaning that the bacteria used in the inoculated diet had no effect on the larvae. This suggests that if the larvae were to come in to contact with the aphid pathogenic bacteria in a natural environment, due to adult bees bringing it in to the hive, they should not be affected by its presence. 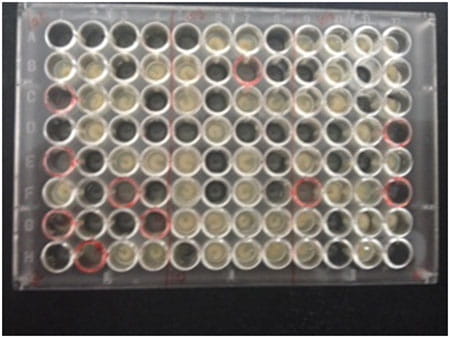 Fig. 1. Larvae 3 days after being exposed to bacteria. Red rings signify where a dead larvae has been removed. The plastic 96 well plate imitates the structure of the comb that the larvae would normally mature in.

Royal jelly
Royal Jelly is fed to bee larvae when they are young larvae. It is well known for having antimicrobial properties. We therefore wanted to check if the diet that the larvae were eating was having an effect on the bacteria’s ability to colonise the gut. Also as the BLD was compromised of 50% and so it is important to determine if this environment would have a detrimental effect on the bacteria’s ability to survive, replicate and colonise the larvae’s gut. 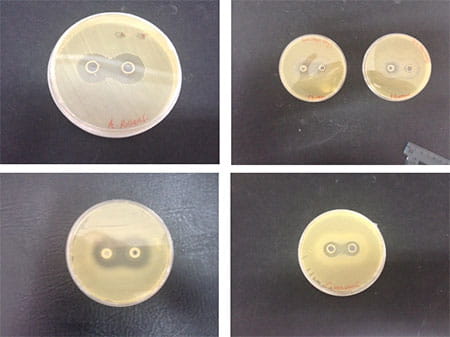 Fig 2.  All 4 bacteria that were used for the virulence assay, and their reactions when grown in the presence of BLD which contains 50% royal jelly. Images clockwise show the inhibitory effects of A. pullans, P. fluorescens, P. poae and C. werkmanii.
The bacteria showed varying levels of inhibition by exposure to the royal jelly. P. fluorescens showing the smallest zone of inhibition, and P. poae and A.pullans showing the largest zones of inhibited growth.

Honey
Along with royal jelly honey is also known to possess antimicrobial properties. As honey is present in the hive, and the bees consume honey, we wanted to investigate whether the bacteria that we are using in our assays are inhibited by the presence of honey. 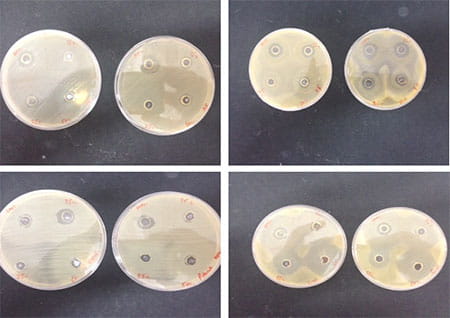 Fig 3. All 4 bacteria that were used for the virulence assay, and their reactions when grown in the presence of varying concentration of honey. Concentrations seen on each plate clockwise are 100, 75, 50 and 25% which contains 50% royal jelly. Images clockwise show the inhibitory effects of A. pullans, P. fluorescens, P. poae and C. werkmanii.
All 4 bacteria showed some level of inhibition when exposed to the honey, P. fluorescens and C. werkmanii showed the largest inhibition.

To conclude, the aphid pathogenic bacteria are not able to survive in the presence of royal jelly or honey. Therefore the in the virulence assays we performed the bacteria would not have survived or been able to replicate in the artificial diet prepared. They did not have any negative effects on the bee larvae because of the antimicrobial effect observed. This may be seen as a positive, as it suggests that if the pathogenic bacteria were to become introduced to the hive via adult bees or other insects, it should not pose a threat to bee larvae or bees, as they ingest honey and royal jelly, the bacteria will not be able to colonise their guts or cause infection. However, as the bacteria is not able to survive in the artificial diet prepared, it could be argued that the larvae were never fully challenged by the bacteria. More investigations need to be carried out on the larvae and adult bees before we can fully conclude if the aphid pathogenic bacteria are potentially harmful to these beneficial insects. The results obtained in Tunisia are positive, and a solid starting point for this work.