Despite huge turbulence from Covid-19, the aviation industry is still working towards the EU goal of reducing emissions by 75% by 2050, Jasmin Fox- Skelley reports

On 10 December 2019, the world’s first commercial all-electric aircraft – the six-seater Harbour Air ePlane – took to the skies on its maiden flight. The world’s first all-electric commercial seaplane, developed by Vancouver based airline Harbour Air, recently completed a 10 minute test flight over the Fraser River near Vancouver International airport. The ePlane is a six-passenger DHC-2 de Havilland Beaver – a Canadian-designed aircraft that has been in use since 1946 – retrofitted with an electronic propulsion system developed by MagniX, a Washington, US company specialising in manufacturing electric motors for aircraft.

‘I’ve believed for some time that the future of aviation and certainly transportation generally is electric,’ says Greg McDougall, CEO & Founder of Harbour Air.

‘There are huge advantages, including an anticipated saving of 75% in engine maintenance costs, huge cost savings in the removal of fuel, increased aircraft efficiency and up to a 75% reduction in noise levels.’

Developing an electric seaplane was not without its challenges, he adds, pointing out that the conversion of a fully electric commercial aircraft had never been done before. Along with the battery technology, certification of a commercial electric aircraft was another issue.

Before the coronavirus pandemic, the aviation sector was estimated to contribute 2-3% of global CO₂ emissions. The number of air passengers had been expected to double by 20371, with ca 8bn flight tickets sold.

This is a problem, because passenger jets – particularly long-haul ones – can’t even take off without guzzling large amounts of high-energy fuels like kerosene, releasing tonnes of CO2 into the atmosphere in the process. In fact, the Organisation of the Petroleum Exporting Countries (OPEC) is confident that worldwide demand for jet fuel will reach 9m barrels/day by 2040, up from 6.3m in 2017.

To prevent serious impacts on the climate, the EU has set an ambitious goal of reducing aviation’s carbon dioxide emissions by 75% by 2050. The UK has also become the first G7 country to adopt the goal of net zero carbon emissions by 2050 – a huge challenge for the air travel business. Regulators are also piling on the pressure, with the European Aviation Safety Agency suggesting that they may soon start categorising aircraft based on their COw emissions. Solutions include electric and hybrid engines, and a number of airlines are embracing these technologies.

Harbour Air now plans to build a full fleet of commercial seaplanes based on the ePlane’s design, with commercial flights expected to start in 2022. The ultimate aim is to electrify the entire fleet, which currently ferries half a million passengers each year between Vancouver, nearby Whistler ski resort and local islands and coastal communities. This would make Harbour Air the world’s first all electric commercial airline.

Israeli firm Eviation are also developing an electric aircraft, Alice, which will carry nine passengers for up to 650 miles at 10,000ft, and is expected to start operation in 2022. The plane is powered by three propellers – one in the tail, and two at the wingtips to counter the effects of drag. US regional airline Cape Air, which operates a fleet of 90 aircraft, has already agreed to buy a ‘double-digit’ number of the aircraft. 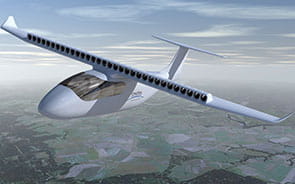 ONERA, the French Research Establishment for Aeronautics and Space is also investing in this area. Its short-range electric aircraft, Ampere, is a six seat electric airplane with a range of 500km. The plane takes advantage of Distributed Electric Propulsion design, where engines or propellers are distributed about a vessel for greater flexibility, allowing propellers to be in places not possible before, and creating a more agile, capable aircraft.

In the case of Ampere, the upper part of the wing contains 32 small electric fans, which accelerate air-flow and enhance lift. Each fan is capable of being controlled separately, allowing better control of the plane in the air. The fans are powered by hydrogen fuel cells, electric motors, as well as charged batteries distributed throughout the plane. So far, researchers have designed and tested a 1:5 scaled version of the aircraft in a wind-tunnel, and the French company expects that commercial operation of the aircraft will begin in the late 2020s.

The advantage of using electricity rather than conventional fuel in small planes for regional flights of up to 800km is clear. As well as zero emissions, electricity is cheaper than jet fuel. According to Magnix, electric aircraft cost between $6 and $12 to charge for a 160km flight, compared with more than $300 in jet fuel. These savings have led investment bank UBS to predict that the aviation sector will quickly switch to hybrid and electric aircraft for regional travel, with an eventual demand for 550 hybrid airliners each year2 between 2028 and 2040.

Medium-range flights of up to 1500km could also benefit from switching to electricity. Unlike short-range aircraft, planes flying this range would need to use a mix of conventional and electric power, for example by switching on the electrical component of propulsion at key points in a flight, such as take-off and landing.

Companies working on hybrid aircraft include Rolls-Royce, Airbus and Siemens, who are collaborating on the E-Fan X programme. In this project, the team are modifying a BAe 146 aircraft, which usually carries around 100 passengers, by replacing one of the aircraft’s four Honeywell turbofan engines with a propulsor fan driven by a two-megawatt electric motor. However, at first the electricity will be supplied by a Rolls-Royce AE2100 gas turbine housed in the aircraft’s fuselage. The first model is set to go into service in 2021, and Airbus wants to make this technology available for 100-seat aircraft by the 2030s.

French aerospace research agency ONERA is also making forays into hybrid planes. Similar to its smaller Ampere aircraft, the 150 seater Dragon plane makes use of Electric Distributed Propulsion by housing a large number of electric fans/ motors under each wing, improving propulsion efficiency. These motors are powered by turbines situated at the rear of the aircraft, which transform the on-board kerosene into electricity.

According to ONERA, some of the biggest challenges in developing mid-range electric planes are generating enough power, and coping with the high magnetic fields produced as a result.

‘Electrification of propulsion for larger aircraft involves significant electric power,’ says Philippe Novelli, Director of aeronautics propulsion and environment at ONERA. ‘For a regional aircraft, the power is in the range of 3MW, however, for a short-medium range, it is well above 10MW.’

‘High electric power also generates magnetic fields induced by the current. These magnetic fields are very likely to generate disturbances in the other electric systems of the aircraft, such as flight control systems, or onboard electronic equipment. Special care is needed to insulate the wires and/or equipment, or arrange the electric network to minimise disturbances.’

Replacing fossil fuels with electricity for long-haul flights, however, will be less straightforward. The problem is not with propulsion, as the technology behind electrical motors and generators has advanced very rapidly; current batteries just aren’t capable of storing that vast energy. Jet fuel contains 30 times more energy per kg than the most advanced lithium-ion battery can store. In other words, to travel the same distance, batteries would need to weigh 30 times more than a plane’s usual fuel intake – making it impossible to get off the ground. In addition, while normal planes start off heavy but get lighter as they burn through fuel, electric aircraft have to carry the full weight of the batteries for the entire flight.

This places limits on the distance that electric aircraft can fly. The world’s largest passenger plane – the Airbus A380 – can travel 15,000km in a single flight without refueling. However if it were to be powered by batteries it could only fly a little over 1000km. Even if all the passengers and cargo were replaced with batteries, the range would still be less than 2000km. This is a problem, because 80% of the aviation industry’s emissions come from passenger flights longer than 1500km.

Solutions are desperately needed to improve battery technology. One exciting prospect is lithium-air batteries, which use oxidation of lithium at the anode, and reduction of oxygen at the cathode to induce a current flow. These can theoretically reach the same energy density as jet fuel, however, they are still at the laboratory stage.

In the short term, the best option for long-haul flights may be to improve the efficiency of existing engines so that they release less CO2. Aircraft engine manufacturers are already investing heavily in improving their current engine technology, and today’s planes are 75-80% more fuel-efficient than 50 years ago. This trend is continuing, with the International Air Transport Association estimating that each new generation of aircraft is on average 20% more fuel-efficient than the one before it. For instance, Airbus claims that the A350 XWB jet, powered by Rolls-Royce’s latest Trent XWB engine, will achieve ‘25% lower operating costs, fuel burn and CO₂ emissions, compared with previous-generation aircraft’. The next generation of Rolls-Royce engine, the UltraFan, will offer a further 20% to 25% reduction in fuel consumption and CO₂ emissions, and is due to enter into service in 2025.

‘When it comes to reducing consumption there is plenty of room for further improvements, or even radical changes,’ says Philippe Beaumier, Aeronautics Director at ONERA, the French Research Establishment for Aeronautics and Space.

‘This includes reducing drag or weight by using new materials, burying engines deep within the aircraft, or Distributed Electronic Propulsion.’

Another option is to use cleaner fuels. Biofuels from feedstocks such as sugarcane, algae and household garbage, which burn more cleanly than fossil fuels, could help in the short term. Four alternative biofuels designed to be as close as possible to jet fuel have already been developed and approved: hydroprocessed vegetable oil (HEFA); Fischer-Tropsch fuels (FT); Alcohol to Jet (ATJ); and fermented sugar (SIP). These can be blended to a certain extent with jet fuel. Airline United Technologies has explored this route, and has been mixing biofuels into traditional jet fuel since 2016.

Boeing has also invested heavily in the development of new ‘advanced biofuels’ – a new category of fuels that could reduce greenhouse gas emissions by as much as 50%, compared with petroleum-based fuels. It has collaborated with Finnish company Neste to test a number of biofuels developed by the latter, including a new fuel capable of being used in existing jet and turboprop engines, that Neste says can cut greenhouse gas emissions by 40-90%. Before it can be used in airplanes, however, the fuel must meet a number of rigorous safety standards. For example, it must not freeze at temperatures and pressures encountered by aircraft, and must be powerful and safe enough to be used with standard jet engines and existing fuel delivery systems.

If approved, production of Neste’s fuel would likely grow from 2m gal/ year to a potential 2bn gal/year. While that’s not enough to fuel the entire global airline industry, it’s an important step and will encourage more oil refiners and other companies to invest in biofuels for jets.

Overall, it seems like the goal of clean aviation could be around the corner, involving a mix of electrification, improved efficiency of airplanes and investing in sustainable fuels.

‘We are at the beginning of the era of electric aviation, and it is very difficult to predict how it will develop,’ says Beaumier.

‘At the moment, the limitations of battery technology means that it is only possible to develop electric planes for very small aircraft, such as air taxis for urban air mobility. Increasing battery efficiency by a factor of two or three may allow electric planes for small regional flights, while switching to hybrid architecture may push the boundaries towards larger regional aircraft.’