Still in, but out

Flying in the face of President Trump’s announcement he would withdraw the US from the Paris Agreement on Climate Change in June, Hawaii became the first US state to put into law its pledge to honour the agreement, with two state bills committed to cutting emissions and publishing greenhouse gas levels.

Hawaii was one of many states that, a few days after Trump’s announcement, joined together with businesses, investors and universities to declare their climate change commitments. Calling itself ‘We Are Still In’, the coalition includes Apple, Google and Nike, as well as L’Oreal, Mars, Nestle and Unilever. Coordinated by Michael Bloomberg, the former mayor of New York City, the coalition plans to submit a plan to the UN.
Nigel Purvis of Climate Advisers, says that, by signing the ‘We are Still In’ letter, and re-committing to honouring the US Paris pledge, companies are hoping to offset any damage to ‘brand America’. It will also help them to meet stricter carbon emissions standards in the 194 countries planning to abide by their Paris pledges.
What’s clear is that the corporate world will still have to face climate change issues, regardless of Trump’s decision. Ironically, the day before Trump’s announcement, shareholders at ExxonMobil’s annual meeting in Dallas backed a motion requiring the world’s largest publicly traded oil company to assess the risks from climate change. Exxon will now have to report on how global efforts to limit the average rise in temperatures to below 20C will affect its business model, although the motion is non-binding. Earlier in May, Occidental Petroleum shareholders also passed a similar motion. 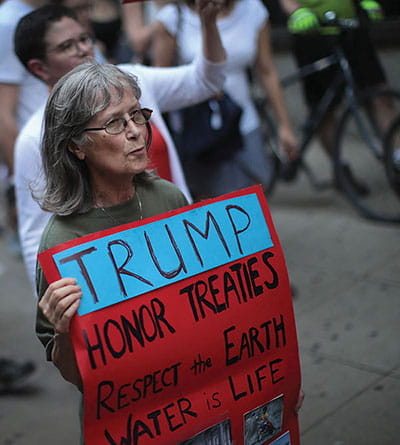 Major energy companies, including ExxonMobil, ConocoPhillips, BP, Shell, Total and Statoil - and even Peabody Energy and Arch Coal, supported the Paris Agreement, says Alden Meyer at the Union for Concerned Scientists. He believes most executives will continue to plan business strategy to manage climate change’s consequences and limit their emissions, as the transition to clean energy presents one of the biggest economic opportunities of this century. ‘Contrary to what President Trump says, his action will do absolutely nothing to boost the economy or create jobs,’ he says. ‘Instead, it will harm the ability of US companies and workers to compete in the rapidly growing global market for climate-friendly technologies.’

The American Chemistry Council states that: ‘Chemical manufacturers will continue to meet global demand for materials and technologies that improve energy efficiency and reduce emissions.’ No chemical companies have, as yet, signed the ‘We Are Still In’ letter of intent.
But in a tweet just hours before Trump’s announcement, Dow Chemical urged the president to keep the US in the climate deal. ‘You won the election with a manufacturing jobs agenda. If you want to create jobs in this sector, support the #ParisAgreement.’ Following news of withdrawal, it expressed disappointment, but added in a statement: ‘We will continue to collaborate with President Trump as well as other businesses, NGOs and academics to continue to advocate for smart policies that enable the reduction of global greenhouse gas emissions and ensure that global markets stay open to American exports and innovation.’

BASF North America states: ‘Climate protection needs a global approach to avoid distortions and enable innovation. The Paris Agreement is set to establish a consistent and predictable framework, which is necessary to foster market-oriented and cost-effective approaches to reducing CO2 emissions.’ However, it won’t comment on how the withdrawal will affect its business.

The American Chemistry Society urges Trump, or future administrations, to reconsider the decision. ‘Climate change represents a real and current threat to our economy, health and welfare,’ says ACS executive director Thomas Connelly. ‘America should continue to take the lead in addressing global greenhouse gas emissions and become a leader in sustainable energy production and technology.’
Meanwhile, Bob Ward of the Grantham Research Institute on Climate Change and the Environment, points out that the terms of the Paris Agreement dictate that the US cannot complete withdrawal before 5 November 2020, the day after the next Presidential election.