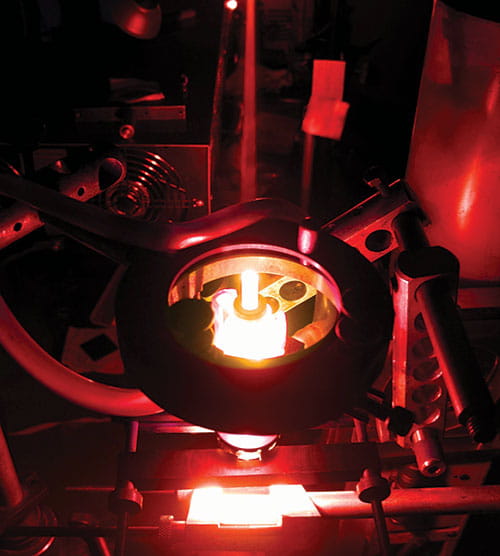 A tiny hollow sphere for bouncing light around has helped measure laser light wavelengths with unprecedented precision - to below one femtometre (10-15m), a millionth of the diameter of a single atom.

The breakthrough means laser wavelengths can be tracked and adjusted much more precisely and could lead to better atomic clocks, improved gravimeters to measure gravitational fields and faster, cheaper identification of biological samples.
When light bounces off a rough surface, a speckle pattern is created that depends on the surface and the laser. This speckle degrades the quality of an image and is usually viewed as something that needs to be overcome.  However, the team at the University of St Andrews, UK, used computational techniques to take advantage of the speckle to measure a laser’s properties. In a 2014 paper they passed light through a 40 micron thick layer of alumina particles as a proof-of-principle (Optics Letters, doi.org/10.1364/OL.39.000096).
This time, the researchers took scattering to an extreme. They shone light into a hollow aluminium sphere measuring 25 or 50mm in diameter (Nature Communications, doi:10.1038/ncomms15610). The light enters via an optical fibre and bounces off walls painted white, traveling up to a few metres before exiting through another small hole. The broken-up, scattered light is monitored with a camera; smart algorithms turn the speckle patterns into fine measurements of wavelength.

Levels of precision approach one part in 3bn, or 10 to 100 times better than current commercial devices. The university has patented the technology, which has been licensed to Scottish photonics company M Squared Lasers.

Rajesh Menon at the University of Utah believes the new device will be a boon for scientists. ‘For many experiments, one needs to know the wavelength of the laser with high precision,’ he says. ‘A cheaper and more reliable way of measuring that would make the vast majority of such experiments much easier.’ The device also allows better control over the laser peak wavelength, he adds, which could be useful in optical communications - potentially increasing data flow down an optical fibre.
Share