Let’s start 2017 by making a connection (literally) between organic chemistry and materials chemistry. Graphene-based science has become a hugely important area of research, but graphene is in essence a simple carbon-based substance. It is a beautiful hexagonal repeat ring system, which matches up nicely with many of the fused heteraromatic ring systems of organic chemistry.

A remarkable paper, which appeared in print only at the very start of this year shows how to attach porphines to the edges of a graphene sheet by a dehydrogenative coupling process (Y. He, M. Garnica, F. Bischoff, J. Ducke, M.-L. Bocquet, M. Batzil, W. Auwärter, J. V. Barth; Nature Chem., 2017, 9, 33) (Figure 1).

To achieve this, first graphene is grown as a two-dimensional sheet on a Ag(III) surface. Porphines are then introduced by vapour deposition. The coupling is achieved by heating, which extends the carbon sheet by ring-fusion with the heteroarene.

The excitement about this type of experiment is that functionalised heterocycles can in principle be introduced in a way that extends their  systems into the graphene conduction band.

Dendrimers that look both ways and dipoles that don’t

A good name can go a long way to promoting a good scientific idea. For dendritic (branched) structures that face in two directions, the term ‘Janus dendrimer’ (Figure 2) sums it up nicely. These branched structures are divided into two zones (north/south, up/down, or to extend the Janus analogy, inward-looking/outward-looking).

When the dendrimer is considered as a whole, the dipoles reinforce each other on the north-south axis but cancel each other our round the equator. This strategy achieves a substantially improved performance, giving the best results yet reported for
polymers made up of simple azo chromophores.

Lighting up the spokes

Compared to the amazing ‘spoked wheels’ created by some synthetic organic chemistry research groups (eg 1 in Figure 3), the materials that comprise graphene, or conventional denrimers with regular repeat patterns, are simple structures. To add further to the possibilities for complexity, the spokes of such wheels need not be merely structural, and examples with spokes that are themselves chromophores.

With a 12-spoke wheel such as 1, C1878H2682, it turns out the each of the identical 12 chromophores functions independently allowing fast-switching and unpolarised fluorescence, since only one chromophore emits light at any particular time. 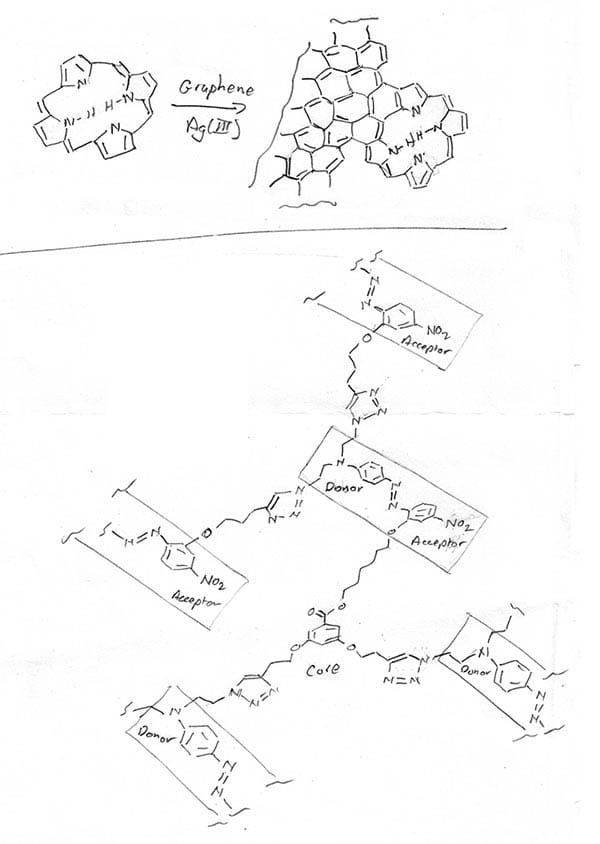 Figure 1  C20N4H12 porphines lose hydrogens to become attached the edge of the graphene. Just one of several attachment geometries is illustrated. In this case, the spacing of C-H positions on the rim of the porphine matches up with the shape of the fused carbocyclic rings of graphene, so attaching the porphine extends the fused ring system at the edges of the sheet 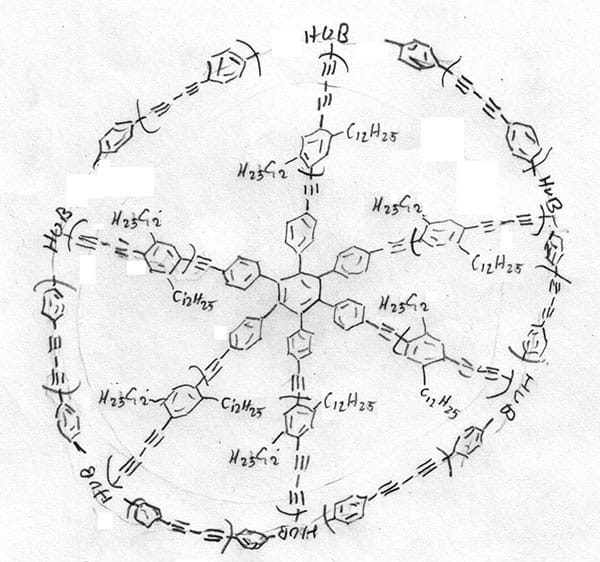