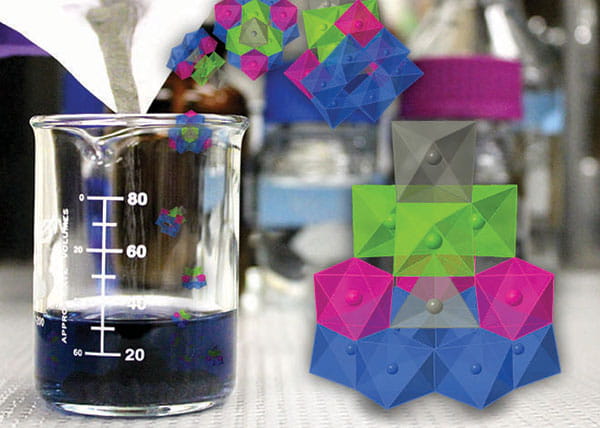 Chromium (III) polyoxycations have been elusive synthetic targets for over two decades, but this is about to change. Researchers at Oregon State University (OSU) have come up with a new controlled strategy to their formation.

Polyoxo chromium clusters, like all first-row transition metal counterparts, have rich valence-electron chemistry. This gives them colour and makes them attractive candidates for a range of applications, including industrial pigments, homogeneous catalysts for redox reactions and as energy storage materials for batteries, fuel cells and artificial photosynthesis. But they can only be isolated from water with organic or inorganic ligands attached otherwise the metal hydroxide precipitates out, which limits their use.

To avoid the hydroxide, lead researcher May Nyman, professor of chemistry at OSU explains: ‘We control the chemistry so the clusters grow not in solution, where they are highly reactive, but only at the surface where the water evaporates and they instantaneously crystallise into a solid phase. Once in the solid phase, there’s no danger of them reacting and precipitating metal oxide or hydroxide in an uncontrolled way.’

In a proof-of-concept experiment, the researchers isolated the mixed metal cluster Zn(CrAl)12 as the nitrate salt (Chem 1, 2016, 8 December, 887). The process involved first dissolving Zn powder slowly in a solution of Al(NO)3)3.9H2O and Cr(NO3)3.9H2O, to drive the formation of the clusters by increasing pH. Typically, the reaction is done at 10x higher concentration than conventional methods to make metal oxide clusters from water. ‘This avoids formation of the nanomaterials in the bulk solution, which would lead to aggregation and not the isolation of the nanomaterials in the next step’ explains Nyman. The solution is then left open to air and the nitrate leaves as a low boiling point complex – azeotrope - with water. The clusters then crystallise and can be isolated at the surface.

The researchers are now applying their controlled strategy to other first row transition metals.

Lee Cronin, professor of chemistry at the University of Glasgow comments: ‘The work by Nyman and coworkers is important since they have found a way to systematically investigate, stabilise, and then isolate Cr(III)-based polyoxocataions. This is important since it will allow us not only to more comprehensively explore Cr(III)-based systems but also develop new technologies and see if these approaches can be extended.’