A polymer which can store hydrogen in a light, compact and flexible sheet, and is safe to touch even when filled with hydrogen gas has been developed (R. Kato, K. Yoshimasa, T. Egashira, T. Oya, K. Oyaizu, H. Nishid; Nature Commun, doi: 10.1038/ncomms13032) (Scheme 1).

The ketone (fluorenone) polymer, which can be produced as a thin sheet, fixes hydrogen via simple electrolytic hydrogenation in water at room temperature. Furthermore, the polymer releases hydrogen when heated to 80oC with an aqueous iridium catalyst. Under mild conditions the cycle of fixing and releasing hydrogen can be repeated without significant deterioration.

The advantages of the ketone/alcohol polymer include easy handling, mouldability, robustness, non-flammability and low toxicity, pointing the way to the development of a light, thin plastic container that can be carried in your pocket. The new material is also expected to contribute to the creation of distributed energy systems, especially in remote areas.

The gecko-inspired adhesive loses no traction in temperatures as cold as liquid nitrogen or as hot as molten silver, and actually gets stickier as heat increases. The vertically aligned carbon nanotubes with tops bundled into nodes replicate the microscopic hairs on the foot of the wall-walking reptile and remain stable from -196oC to +1000oC.. Bundled nodes of the carbon nanotubes penetrate surface cavities and form web-like structures. As the surface heats it becomes increasingly rough, and the bundles appear to penetrate deeper, becoming locked into place and further increasing the adhesion.

Because of the adhesive remains useful over such a wide range of temperatures, the inventors say it is ideally suited for use in space, where the shade can be frigid and exposure to the sun blazing hot. In addition to this temperature range, the bonding agent offers properties that could add to its utility. The adhesive conducts heat and electricity, and these properties also increase with temperature. When applied as a double-sided sticky tape, the adhesive can be used to link electrical components together and also for electrical and thermal management.

Material engineers use several strategies to generate self-healing materials. They can physically embed the material with microcapsules or pathways filled with healing agents or build the material by using molecules, such as polyrotaxane, that change shape in response to damage -- also called stress relaxation. Chemical self-healing materials use reversible bonds ranging from reversible chemical reactions to intermolecular interactions such as hydrogen bonding.

By combining physical and chemical self-healing technologies the researchers have developed materials using polyrotaxane as a backbone structure cross-linked by reversible interactions, between boronic acid and diol, that exhibit rapid and efficient self-healing even in a dried, hard state (M. Nakahata, S. Mori, Y. Takashima, H. Yamaguchi, A. Harada; Chem, 2016, 1, 766).

The polyrotaxane structure enables stress relaxation in recovery from a shallow dent, and the reversible nature of the bonds enables chemical self-healing from a deep cut. The combined approach allowed the materials to recover up to 80% of their strength within 10 minutes (without the combination, the materials could repair only up to 30% of their strength after an hour). Only a small amount of water vapour is needed to facilitate self-healing in the dried film state; water serves as a non-toxic glue in the self-healing process.

The materials could be used in a wide variety of applications ranging from external coatings of cars and buildings to medical applications, such as self-healing adhesives and resins. The researchers expect to be able create hard material that can self-heal under ambient conditions without the addition of any external cues.

Polymers with biodegradable backbones are now available for the first time from chemical vapour deposition, by combining paracyclophanes with cyclic ketene acetals [F Xie, X Deng, D Kratzer, K C K Cheng, C Friedmann, S Qi, L Solorio, Anfgew Chem Int Ed Engl., 56,[2017],203]. In CVD polymerization, the starting compounds are vaporized, activated at high temperature, and deposited onto surfaces, where they polymerize- Scheme 3. While the classic polymers based on paracyclophanes are connected exclusively through carbon-carbon bonds, the ketene acetal converts during the polymerization so that ester bonds (a bond between a carbon and an oxygen atom) are formed within the polymer backbone. Ester bonds can be broken in aqueous environments. The speed of the degradation depends on the ratio of the two types of monomer as well as their side chains. Polar side chains make the polymer film less hydrophobic and accelerate degradation because water can penetrate more easily. The speed of degradation can thus be tailored to the intended use. Tests with cell cultures demonstrated that neither the polymer nor its degradation products are toxic. Using this technology  polymer films can be produced equipped with functional side groups that act as "anchor points" for molecules, which can be used to attach fluorescence dyes and biomolecules. The new degradable polymer films could find broad application for the functionalization and coating of surfaces in the biological sciences as well as medicine and for food packaging applications.

A dinuclear cobalt complex [Co2(OH)L1](ClO4)3 (1, L1=N[(CH2)2NHCH2(m-C6H4)CH2NH(CH2)2]3N) has been reported [T Ouyang, H-H Huang, J-W Wang, D-C Zhong, T-B Lu; Angew Chem Int Ed Engl., 56,[2017],738]- Scheme 4, which displays high selectivity and efficiency for the photocatalytic reduction of CO2 to CO in CH3CN/H2O (v/v=4:1) under a 450 nm LED light irradiation, with a light intensity of 100 mW cm−2. The selectivity reaches as high as 98 %, and the turnover numbers (TON) and turnover frequencies (TOF) reach as high as 16896 and 0.47 s−1, respectively, with the calculated quantum yield of 0.04 %. Such high activity can be attributed to the synergistic catalysis effect between two CoII ions within (1). The research provides a new direction towards the development of efficient, economic, and applicable photocatalysts for O2 reduction to CO.

Aldehydes from alkenes and CO2 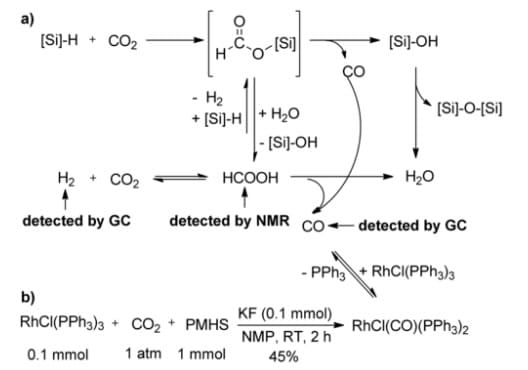 a) Proposed mechanism for the hydrosilylation of CO2 to CO, H2, HCOOH, and siloxanes. b) Formation of the rhodium carbonyl complex [RhCl(CO)(PPh3)2] from the reaction of RhCl(PPh3)3 with CO2 and PMHS.

A rhodium-catalysed one-pot hydroformylation of alkenes with CO2 , hydrosilane, and H2 has been developed that affords the aldehydes in good chemoselectivities at low catalyst loading. This the first reported method for the synthesis of aldehydes from alkenes and CO2 (X. Ren, Z. Zheng, L. Zhang, Z. Wang, C. Xi, K. Ding; Angew Chem In Ed Engl., 2017, 56, 310) (Scheme 5).

Mechanistic studies indicate that the transformation is likely to proceed through a tandem sequence of poly(methylhydrosiloxane) (PMHS) mediated CO2 reduction to CO and a conventional rhodium-catalysed hydroformylation with CO/H2 (Scheme X). The hydrosilylane-mediated reduction of CO2 in preference to aldehydes was found to be crucial for the selective formation of aldehydes under the reaction conditions.

Scheme 6 Catalytic oxidation of alkanes by Cu complexes with H2O2

A new catalyst for breaking the tough molecular bond between carbon and hydrogen holds the promise of a cleaner, easier, cheaper way to derive products from petroleum, has been reported (Isaac Garcia-Bosch, Maxime A. Siegler; Angew Chem Int Ed Engl., 2016, 55, 12873) (Scheme 6).

Simple, plentiful hydrocarbons are the starting block for complex chemical products such as plastics and pharmaceuticals. The first step, however, is very, very difficult - breaking the carbon-hydrogen bond. A new au naturel catalyst mimics nature to break the tenacious C-H bond. Copper complexes bearing readily available ligand systems have been found to catalyse the oxidation of alkanes with H2O2 as the oxidant with high efficiency in remarkable yields (50–60 %). The reactions proceed with unprecedented selectivity to give alkyl hydroperoxides as the major products.

Detailed scrutiny of the reaction mechanism suggests the involvement of C-centered and O-centered radicals generated in a Fenton-like fashion.

Alkali metal monohydrides, AH (A = Li–Cs) can be obtained in quantitative yields at room temperature by reactive milling of alkali metals in the presence of hydrogen gas at 200bar or less. The mechanochemical approach eliminates problems associated with the malleability of alkali metals — especially Li, Na, and K — and promotes effective solid–gas reactions, ensuring their completion. This is achieved by incorporating a certain volume fraction of the corresponding hydride powder as a process control agent, which allows continuous and efficient milling primarily by coating the surface of metal particles, effectively blocking cold welding.

This method is scalable and particularly effective for extremely air-sensitive materials, such as alkali and alkaline earth metal hydrides. The technique may also be favourable for production in continuous reactors operating at room temperature, thereby reducing the total processing time, energy consumption and, hence, the cost of production of these hydrides or their derivatives and
Share