The Indian spice turmeric has been used for centuries to treat inflammatory conditions including arthritis, eczema, ulcers, asthma, wounds and tumours. The active component, curcumin has become one of the most studied plant-derived medicinal products. Although widely used as a dietary supplement, however, curcumin has not been approved by the US Food and Drug Administration (FDA) for the treatment of any human disease.

Evidence for the therapeutic benefits of curcumin stem from use in traditional Asian medicine, epidemiological data and preclinical studies including animal models. Epidemiological studies have linked the high consumption of curcumin/turmeric in India – up to 1.5g/person daily – to the lower overall incidence of cancers, including colorectal, pancreatic, lung, breast, and prostate, compared with Western countries where little curcumin is consumed. Studies in rodents show that dietary curcumin (0.1–2% w/w in the meal) can lower gastrointestinal inflammation and has efficacy against leukaemia, colon, stomach, liver, breast, and pancreatic cancers. More than 100 different cellular targets, including transcription factors, receptors, enzymes and cytokines, have been identified whereby curcumin modulates disease processes.

Encouraged by preclinical data, the number of clinical studies testing curcumin in people continues to increase, reaching 91 by January 2014 (see graph below). Curcumin is being evaluated in a diverse range of diseases, including cancers, Alzheimer’s disease, diabetes and others.

Disappointingly, there is little evidence of clinical efficacy from the results available to date. As with many other promising drug candidates, the remarkable results seen in animals have not been replicated in humans. 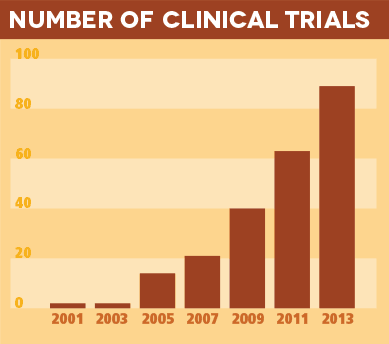 However, the poor results from initial clinical trials are by no means the end of the story, as new avenues of research are being pursued. The lack of clinical efficacy, for example, was quickly attributed to curcumin’s notoriously low bioavailability and rapid metabolism. Curcumin is a hydrophobic diphenol and poorly absorbed from the gastrointestinal tract. Owing to its free hydroxyl groups, curcumin is quickly conjugated to glucuronic acid or sulfate in the intestine and liver, or, alternately, undergoes successive reduction of its double bonds to form hexahydrocurcumin.

Pharmacokinetic studies have shown that very little curcumin reaches the systemic circulation after oral consumption, with mostly metabolites of curcumin detected in the blood plasma and body tissues instead. Therefore, recent research in the field has focused on improving curcumin’s bioavailability, mainly through developing complex formulations involving phospholipid encapsulation or nanoparticles. These have led to significant improvements in the bioavailability of curcumin. But again, only marginal effects on clinical efficacy have so far been reported with these novel formulations.

The most puzzling question about curcumin, however, is: what is the chemical basis for its polypharmacology? How is a simple molecule like curcumin able to interact with 100 or more cellular targets? The answer could be the key to improving the therapeutic efficacy of curcumin. The question is pertinent given curcumin’s virtual absence from organs such as the brain where animal studies have nevertheless demonstrated efficacy. This discrepancy has led to the suggestion that biological effects could be ultimately mediated by its metabolites. To date, however, there has been little evidence to support this hypothesis.

In an article in the Journal of Biological Chemistry in 2011,1 our group at Vanderbilt University Medical School in Nashville, Tennessee, US, showed that curcumin undergoes spontaneous oxidative transformation catalysed by the enzyme peroxidase. The oxidation is initiated by H-abstraction from one of the phenolic hydroxyls and proceeds through a series of reactions to generate a dioxygenated product we termed bicyclopentadione (below). We detected the bicyclopentadione in human plasma after oral curcumin, establishing that oxidation of curcumin occurs in vivo. Further studies in our lab identified 10 additional oxidation products with novel structures, including reaction intermediates. Two of the intermediates, a proposed quinone methide and a spiroepoxide, are reactive electrophiles. 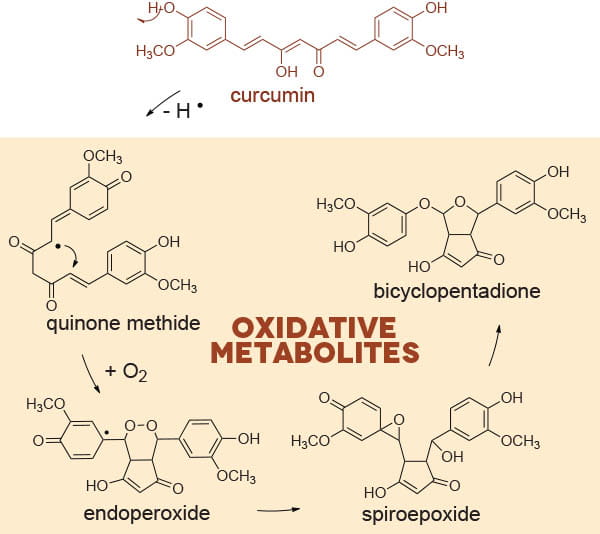 The chemical instability of curcumin at physiological pH had been known for a long time but was not recognised as an autoxidative transformation. There are important implications to our discovery of curcumin autoxidation. First, the oxidative transformation of curcumin adds novel players to the discussion about bioactive curcumin metabolites. Secondly, the formation of multiple, chemically diverse metabolites may explain the ‘pleiotropic’ cellular effects of curcumin, as different products are likely to affect different targets.

The earliest intermediate of the oxidative transformation is the proposed quinone methide (QM). We consider it ‘proposed’ because we were not able to isolate a quinone methide intermediate, though its existence is mechanistically sound.  Quinone methides are reactive electrophiles often seen in the bioactivation of anti-cancer pro-drugs; they covalently ‘adduct’ or link  to their cellular targets – proteins or DNA – to execute their biological function. Several important curcumin targets are known to be modulated by quinone methides. Among these are the topoisomerase enzymes that mediate the cutting and re-ligation of DNA to relieve tangles formed during replication of genetic material.

The adduction of quinine methides to topoisomerases effectively poisons cells by preventing re-ligation of the DNA strands, causing permanent DNA strand breaks and cell death.  Since cancer cells divide more rapidly than normal cells, they are more reliant on these enzymes and more susceptible to treatment. Etoposide, for example, a clinically used cancer drug that targets topoisomerase, is metabolically activated to the quinone in order to covalently modify topoisomerase. Interestingly, curcumin has been shown to be a more potent poison of topoisomerase enzymes than etoposide in cell culture studies. The mechanism of action of curcumin, however, is unclear.

Using recombinant topoisomerase in vitro, we have recently shown that oxidative activation of curcumin to a QM is required for its poisoning activity.2 The parent curcumin had no effect on the enzyme. Our data suggest covalent adduction of the quinone methide to cysteine residues in the enzyme active site as the mechanism of action. A literature survey shows that many other important curcumin targets are also regulated by reactive electrophiles. Among these is the transcription factor NF-κB, a major driver in inflammation and cancer. Our findings suggest that oxidative activation to the quinone methide may be involved in curcumin’s well documented inhibition of NF-κB.

What about the other curcumin metabolites, and how might they be acting?  The answer to this question is easiest to predict for the spiroepoxide. Similar to the QM, the spiroepoxide is a reactive electrophile and can adduct to cysteine residues to perform its biological function. Since cysteine residues in different protein environments are selective for different strength electrophiles, we predict that the targets of the spiroepoxide are different from those of the quinone methide. Indeed, the spiroepoxide was much less potent at inhibiting topoisomerase than the quinone methide. The other oxidative curcumin metabolites share a nucleophilic β-diketone moiety as a prominent chemical feature, and likely affect a completely different set of cellular targets. These targets remain to be determined experimentally.

Understanding curcumin as a pro-drug requiring oxidative activation is a novel hypothesis. Our current research is directed at showing which of curcumin’s pleiotropic effects require activation and which do not. If it turns out that many of the promising preclinical effects do, how can this help understand the results of past clinical trials and aid the design of future ones?

New insight may be gained from testing disease conditions that provide a sufficiently ‘oxidative environment’ to enable activation but what are these conditions? It is likely that a simple ‘the more oxidation, the merrier’ approach may result in cellular and tissue damage. When and where oxidative transformation occurs may be the major factors determining therapeutic outcome.

Further investigation of the role of the oxidative metabolites of curcumin, and the conditions required for their formation, can provide a new paradigm towards improving curcumin’s therapeutic efficacy.

Odaine Gordon is a graduate student and Claus Schneider is an assistant professor in the department of pharmacology at Vanderbilt University Medical School in Nashville, Tennessee, US