Shale gas production has soared in the US, with the country about to cross over from being a net importer to a net exporter of natural gas. Prices have not only decoupled from those of crude oil, they have plunged by as much as two-thirds from their peaks of 2007-2008. And because much of shale gas is famously ‘wet’ – rich in natural gas liquids – ethane, propane and butane are becoming massively available at bargain-basement prices.

Olefins makers clearly see this as a long-term trend, because they are responding with massive US investments in natural gas liquid (NGL) processing. By 2016, they will start to bring on-stream a clutch of new steam crackers fed by ethane from shale gas.  This, coupled with ongoing growth in China’s coal-to-chemicals programme, is threatening Europe’s ageing fleet of naphtha-fed crackers. At best, old-world olefins will be pushed to the back of the supply curve; at worst, more will be forced over the cliff of close-down.

Meanwhile, the shift away from conventional naphtha as a cracker feedstock is leaving a hole in the production of byproducts, most notably propylene and butadiene. This is sparking a renaissance of alternate routes, decades-old conversions such as dehydrogenation, metathesis and gas- and coal-to-olefins, which are re-emerging as a Generation 2.0 of heavier-olefins thanks to the shale gas boom.

The impact both of ‘tight gas,’ also obtained from rocks – in this case non-sandstones – like shale gas by hydraulic fracturing, cannot be overstated. US total output  gas will grow by about one half by 2040, says the US Energy Information Administration (EIA), even as conventional sources continue their now-decade-long decline (see chart, below). 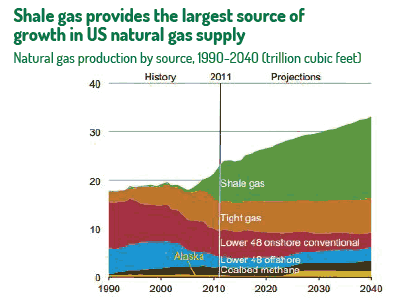 Already for the full-year 2013, the US has elbowed aside Russia to reclaim its long-lost crown as world-champion producer of not just gas but oil as well.  For gas, says EIA, this will flip the country’s current position as a net buyer – 8% more imports than exports – to that of a net seller by around 2020, and lead to a 12% export-import surplus by 2040.

Gas’s supply surfeit has cratered US prices. From a 2008 peak of around $10/million BTUs (28.3m3) and rough equivalence with crude oil, wholesale tabs have plummeted to around $3, about 20% of what an equivalent amount of petroleum energy costs. Indeed, says Tony Potter, vice-president at market researcher IHS Chemical, prices have fallen so far that producers have capped numerous dry gas wells, because their returns do not cover the costs of production.

Ironically, this has reversed the traditional roles of gas and natural gas liquids (NGLs). In many fields, gas is no longer the main product but the byproduct to ethane, propane, butane and condensate that carry the bulk of the payback. ‘Thousands of wells out there are running first and foremost to supply NGLs,’ observes Al Troner, president of Asia Pacific Energy Consulting. ‘They can’t and won’t produce just for the sake of natural gas.’

Even so, NGL rates are scraping historic lows. Ethane commands no more than fuel value – and a depressed gas-value at that, says Potter. Between 2010 and 2013, the price spread between gasoline and propane has increased threefold, reports consultancy ICF International. ‘There is far too much out there in the market,’ comments a supplier with close links to the industry. ‘NGLs have become an excess item, something that [US] producers just want to get rid of.’

Their headache, of course, is a boon to petrochemical players. Plans to build new crackers that will mop up some of the material have been announced by Dow, ExxonMobil, Chevron Phillips, Formosa Plastics, Sasol, Shell and Occidental/Mexichem. In addition to those seven announced, Potter says another five are on the drawing boards. Except for Shell’s unit – expected to come onstream in 2019-20 in the heart of northeastern US shale gas country – the new crackers, all to be located on the US Gulf Coast, are expected to start up in 2016–2017. If realised, the announced seven will step up US ethylene capacity by as much as a third, a whopping 10m t.

No less whopping will be their cost advantage. As recently as 2006, ethane-fed US crackers were last on the ethylene cost-curve, lagging even the then-penultimate ones in Europe, says Daniel McCarthy, technology group president at CB&I, the current owner of process-licensor Lummus. However, they have now vaulted their way into second place behind Middle-eastern ethane, comfortably ahead of their flexi liquified petroleum gas (LPG)/naphtha competitors both near and far (see graph, below). 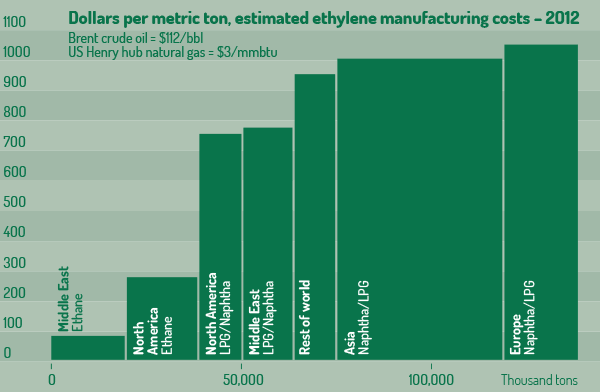 Meanwhile, another major unconventional source of olefins is starting to come online. Ethylene – and perhaps almost equal amounts of propylene – is starting to be made from remote or ‘stranded’ Chinese coal, so called because it cannot be supplied economically to energy markets. As much as 40m t/year of coal-to-olefins (CTO), split about equally between ethylene and propylene, could be switched on between 2010 and 2016, claims Lei Xia of AsiaChem Consulting.

This would more than double China’s 2013 ethylene capacity of about 13m t; however, ambition might be greater than reality. Without quoting a specific figure, Xia suggests that concerns about water availability and air quality are delaying or deleting some significant capacity. For instance, Dow’s $10bn coal-to-chemicals joint venture with coal miner Shenhua Group is still waiting on a government green light more than three years after it was proposed to regulators. Based on its survey of producers, IHS Chemical pegs the 2010-16 CTO-based increase more modestly, at about 12m t of ethylene.

In addition to environmental concerns, profitability considerations might be delaying play. Although creating chemicals from Chinese coal can be staggeringly cheap because the coal is valued near to zero, McKinsey consultant Theo Jan Simons notes that capital investment can be unusually high. Several industry players speculate that the flood of shale-fed capacity has suspended Chinese plans. ‘If enough other sources – such as shale gas – generate new supply,’ says one insider, ‘maybe the Chinese don’t need to add nearly so much expensive capacity and can spend their money elsewhere.’

Whether or not China fulfills its plans completely, for the European industry to the end of this decade, the handwriting is on the wall because of high costs, low operating rates of around 80%, margins below the reinvestment rate of €225–275/t of ethylene and a steadily declining trade balance. ‘Could US shale gas be the end of European olefins?’ asks Michael Smith, a senior director at IHS Chemical.

The outlook might be typified by two shutdown announcements in the autumn of 2013. First, Total set out plans to close in 2015 its naphtha-fed, 340,000t ethylene cracker in northeastern France. Of the 554 jobs at the Carling site, only 110 will be lost, however, because the company will offset the move with additional employment and investment in management, polymer production and R&D.

Second, Ineos went to the brink and back with its two crackers at Scotland’s Grangemouth, rated at a combined 1m t of ethylene. After announcing it would shut them and eliminate 800 jobs, the company did a last-minute turnaround in late October, saying it will keep them running by switching from their former North Sea feedstocks to imported NGLs from US shale (C&I, 2013,12, 5 & C&I, 2013,12, 31). The sticking point was getting employees to make pension concessions and government to offer some £130m in loans – which will help fund the import terminal and other required investments. Depending on which side of the story is being told, the weeks-long crisis negotiations over the closure were drawn out by intransigence of Ineos, the UK and Scottish governments, the local unions or all of the above.

Not all is lost

But there is a silver lining in Europe’s clouds. The shale shift has lightened up cracker output enormously; CB&I’s McCarthy contrasts naphtha’s co-product output of propylene, C4s and pygas at nearly 1.5t/t of ethylene with that of ethane’s, only 0.09t/t. With demand for propylene and butadiene still robust, these increasingly need to be sourced from ‘on-purpose’ production rather than as an ethylene byproduct.

This has suppliers of on-purpose technologies and catalysts – many with substantial European operations – rubbing their hands together. ‘Shale gas has transformed the global olefins business and that has created some huge opportunities for catalyst technology and sales,’ says Stefan Heuser, head of Clariant’s Business Unit Catalysts. Clariant is straddling all the major on-purpose routes: propane dehydrogenation to propylene; metathesis of C5s-C6s to propylene; butane-butylene dehydrogenation to butadiene; and conversion of coal or gas to olefins.

None of these processes is remotely new. In fact, as process vendors such as CB&I/Lummus, Fluor, Foster Wheeler, KBR, Lurgi and Sasol concede, they date back to the go-go days of petrochemicals and refining in the mid-1900s. Nonetheless, all of them are tweaking the methods to make them higher-yielding and lower-energy.

The incentives to do so are enticing, because construction of on-purpose capacity is booming. According to a study published in October 2013 by market researcher ICF International and the US Propane Education and Research Council, the US will turn on nearly 5m t of propane-dehydro capacity between 2010 and 2018.

Aside from a black swan, probably the only potential spoiler in the rosy future of on-purpose olefins is that of oil prices. If they were to fall more in line with those of gas, the remix of energy options could push the industry back towards liquid feeds and byproduct output. So, where are they headed?

However, some oil analysts point out that crude tabs have slumped over the past year, despite massive unrest in the Middle East. Two of them in the US, the University of California’s Amy Jaffe and Rice University’s Mahmoud El-Gamal, say this is a harbinger of a medium-term collapse. In a paper of July 2013, they predict ‘a significant fall in oil prices in the three to five year time horizon’. While they omit a precise definition of significant, they suggest the magnitude will be similar to the oil bust of the 1980s.

That fall was hard. From 1972, global oil prices soared 10-fold to a 1980 peak of ca $35. Then they deflated steadily and finally crashed in 1986 – much higher than where they started, but down by nearly two-thirds to $15. If a crash happens again, it clearly would offer a ringside seat to yet another revolution.

Eric Johnson is managing director of Atlantic Consulting, based in Zurich, Switzerland