In April 2011, a dust storm in Northern Germany caused an 81 car pile-up killing seven people. What was the cause? Years of intensive soil tillage had left the uppermost layer of topsoil pulverised and exposed to wind and rain.

Mechanical tillage is used to create a clean seed bed and bury weeds, but over time it creates a hard pan below the soil surface and a destructured soil layer above that is low in organic matter.

This occurs whether tillage is carried out manually by hoe or with a plough. With each movement of earth, soil particles become finer, allowing less moisture to penetrate the soil surface and be retained for uptake by crop roots. Rain tends to seal the soil surface, accumulate and run off, causing erosion and downstream flooding; and when the land dries out, the fine particles are picked up and carried away by the wind, as happened in Northern Germany.

The structural damage to soils caused by tillage also leads to a progressive decline in their fertility and health. Organic matter content drops, and with it, the biological activity that helps to make vital minerals and nutrients available to crops. The fertility decline is much faster in tropical than temperate areas because the higher temperatures lead to faster organic matter depletion. This loss of soil biodiversity, destruction of soil structure and its recuperating capacity, and increased soil compaction, runoff and erosion, indicate the current poor state of many of our soils.

The unhealthy condition of our soils is being exacerbated by the application of excessive mineral fertilisers; and the reduction or elimination of crop diversity and rotations due to agrochemical inputs and commodity-based market forces. The situation is leading to increased threats from insect pests, diseases and weeds against which farmers are forced to apply ever more pesticides and herbicides – further damaging biodiversity and polluting the environment. Intensive tillage also disrupts important soil functions, such as carbon sequestration, water and nitrogen cycling, soil formation and erosion control.

In short, the root cause of agricultural land degradation, decreasing productivity and negative environmental and ecological impacts of agriculture is  tillage, intensive or otherwise.

The shift towards intensive tillage-based agricultural production systems in the UK and mainland Europe, and internationally, since World War II has moved the agriculture sector onto a path that is ecologically, economically and socially unsustainable. Intensive tillage-based farming, accompanied by its high and addictive dependence on agrochemical inputs and heavy machinery, is no longer fit to meet the agricultural and rural resource management needs of the 21st century.

The future requires that farming and agricultural landscapes must become multi-functional and ecologically sustainable. This means that any production enhancement must go hand in hand with the enhancement and delivery of desired ecosystem services, and production systems must be efficient as well as resilient.

An alternative solution has been known since the mid-1930s, when the US midwest suffered massive dust storms and soil degradation due to intensive ploughing of the prairies. Today, there is overwhelming evidence that profitable and sustainable farming can be managed without tillage; seeds can be directly drilled in untilled soil through the mulch cover; and cropping systems can be kept diversified for resilience. These practices define the principles of Conservation Agriculture (CA), an approach to managing agro-ecosystems for improved and sustained productivity, increased profits and food security while preserving and enhancing the resource base and the environment. CA is characterised by three linked principles: 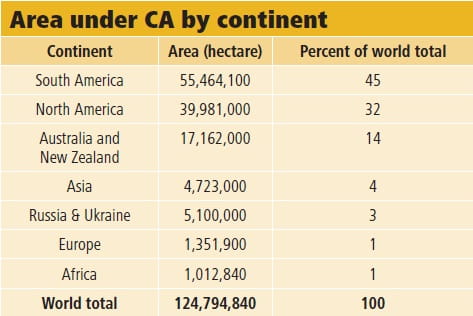 Already, CA is practiced on more than 125m ha of arable cropland globally – 9% of cropland – mainly in North and South America, and in Australia, but also increasingly in China, Kazakhstan, Ukraine and Russia (See table above). This area has been expanding at 6 to 8m ha/year for the past decade during which time  CA has spread to countries in Asia more generally, in Europe (including in the UK) as well as in Africa. Over 1m ha in Africa is now under CA and some two-thirds of the area is under smallholder production. Much of this smallholder adoption has occurred in the past five to seven years through participatory dissemination approaches as more extension attention and development resources are directed towards the promotion of CA by national governments and development agencies.

In general, CA benefits can include increased productivities and yields; up to 70% decrease in fuel energy or manual labour; up to 50% less fertiliser use; 20% or more reduction in pesticide and herbicide use; some 30% less water requirement; and reduced cost outlay on farm machinery. Further, it is possible to enhance climate change adaptability of cropping systems, farms and landscapes because of improved soil-plant moisture relations while at the same mitigating climate change through greater carbon sequestration and lower emissions of greenhouse gases.

Like any farming system, CA has constraints for large scale dissemination. Establishing CA can be difficult in the first few years in some semi-arid areas and on heavy clay soils, compacted soils and poorly drained land. Control of pests and diseases may also be a concern where crop residues are left on the soil, and pesticides/herbicides may be required, at least in the initial years. Leaving crop residues on fields as mulch would eliminate an important source of animal fodder in areas where livestock play an important role in farm economies. There can be other location-specific issues that must be addressed such as the risk of a loss in productivity in the early years or the possible displacement of paid farm labour. On larger farms, the lack of appropriate equipment for seeding and fertiliser placement through surface mulches can be problematic.

Adoption and spread of CA internationally shows that these challenges can be overcome by farmers through local solutions involving a range of public and private sector stakeholders. The negative effects of the above-mentioned difficult biophysical conditions can be reduced as new, improved, soil physical and biological conditions are established through CA practices, and diversified crop associations and rotations  can keep crop pest/disease risks low.

Weed control is easier where hand cultivation is practised; and the use of an initial herbicide application followed by crop rotations and maintenance of a continuous soil cover by plants and mulch can eventually reduce weed competition.

Crops whose yield is located below ground such as white potato, sweet potato, cassava, groundnut, and sugar beet can also be planted into untilled soil, and harvested with minimal soil disturbance. Rice too can be, and is, produced without ‘puddling’ the soil.
In CA systems with livestock husbandry, total biomass production is increased over time so that it is possible to manage residue allocation between livestock feed and soil protection dynamically. Suitable mechanical equipment will become more accessible as a sufficient market develops for the local manufacture and provision of such equipment.

There are several ways to support CA:

Reaping the full benefits of CA means that all stakeholders become involved in facilitating the transformation process as is happening in countries such as Brazil, Argentina, Paraguay, the US, Canada and Australia. This is also beginning to occur in some countries in Europe, Africa and Asia. However, a more structural response to the opportunities presented by CA calls for a realignment of agricultural institutions, including research, extension and education, as well as agriculture development policies to enable CA to become the preferred choice.

For the UK and mainland Europe, branding and incorporating CA practices as ‘green’ in the Common Agriculture Policy should encourage farmers to adopt them and take environmental stewardship for sustainable production intensification more seriously.

This article is based on a presentation in late 2012 at an SCI meeting on More crop per drop. Amir Kassam OBE is a visiting professor in the School of Agriculture, Policy and Development, University of Reading, UK; Laila Kassam is a PhD researcher at the School of Oriental and African Studies (SOAS), University of London, UK; and Cary Clark is an educationalist in online learning in agriculture, financial literacy and communication based in Phoenix, Arizona, US.