Food and animal feed must be safe, authentic and properly labelled, which is the responsibility of those who make and sell it. Reputable businesses take their responsibilities seriously – none wants to poison or mislead their customers. But to ensure consumers are protected, and that there is a level playing field for all companies, the local authority trading standards and environmental health departments ensure the day-to-day enforcement of the laws for food and feed. This requires stringent sampling techniques and methods of analysis, with public analysts providing the underpinning measurement science. In general, there is close cooperation between the vast majority of businesses and enforcement officials and clear, guiding principles. But what if there is a dispute about the results of analysis or their interpretation?

Companies can go through the courts, although this is expensive and risky. While magistrates, judges and juries have an honourable record of dealing with technical evidence, there are often grey areas and the use of expert witnesses is not always satisfactory or conclusive. Alternatively, companies can take their dispute to a technical referee, an independent body with a track record in analytical expertise.

The Government Chemist Programme (GCP) at LGC provides a statutorily-based route of technical appeal to prevent or resolve measurement disputes before costly processes in the criminal courts. Funded by the National Measurement Office (NMO), GCP is independent of the Foods Standards Agency (FSA) and the Department for Environment, Food and Rural Affairs (Defra). The NMO also oversees governance of the GCP through an advisory group made up of industry, enforcement and academic stakeholders.

The most frequent source of GCP referee casework involves disputed results on aflatoxins in consignments of imported food held at UK ports. Between 2005 and 2011 there were over 40 such incidents. Aflatoxins are secondary metabolites produced by some fungal species, which can contaminate crops such as peanuts, spices or figs with toxins in the field or after harvest. They are associated with liver cancer and strict control measures are in place to reduce human consumption, with surveillance undertaken at ports to prevent contaminated consignments entering the UK.

In one recent example, a consignment of figs was inspected at a UK port by Port Health officials. The harvest had been certified compliant by sampling and analysis prior to shipment to the UK.

Port Health used an elaborate sampling protocol to reflect the fact that mould contamination tends to be patchy rather than evenly distributed. Three official sub-samples were taken, each divided again into three – one for the public analyst, one for the importer and one held in reserve in case of a dispute. The public analyst found the consignment to be non-compliant – aflatoxin B1 was above safe limits of 2µg/kg – but the importer’s results disagreed. The third, retained portion of each sub-sample was sent to the GCP to resolve the dispute.

At GCP, we test every sub-sample three times, on three separate days, alongside appropriate control materials. Accompanying samples were spiked with known quantities of aflatoxins so that the proportion recovered from analysis could be factored into the final measurement. The analysis involved optimised solvent extraction, immunoaffinity chromatography clean up, liquid chromatography (LC) separation with post column derivatisation and fluorescence detection. The identity of the measured toxins was confirmed by LC-tandem mass spectrometry (LC– MS/MS), the gold standard of molecular identification. 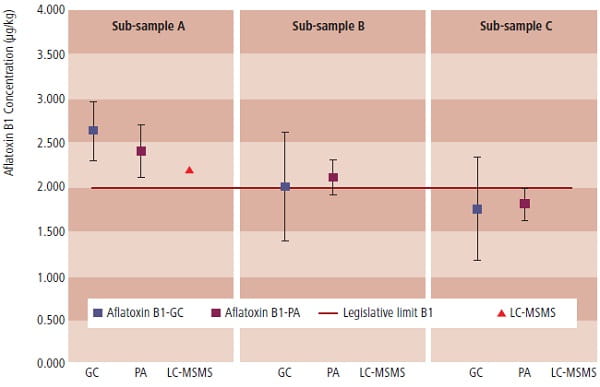 Figure 1: The aflatoxin B1 case: GCP findings confirm those of the Public Analyst (Note LC-MS/MS was carried out on A only.

The dataset (Figure 1) illustrates the complex decision-making accompanying modern food safety regulation at the trace level. For sub-sample B, although one of the mean results was above the limit, the expanded measurement uncertainty straddled the limit. (No measurement is truly exact, the expanded measurement uncertainty describes the dispersion of results around the mean or average value and is usually expressed as a 95% confidence interval – an interval within which we may reasonably assume the ‘true’ value lies.) Since food law is criminal law, the burden of proof is to the criminal standard of ‘beyond reasonable doubt’. Thus, where the expanded measurement uncertainty as a 95% confidence interval straddles the limit, it does not breach the required forensic standard. This is an important feature of all forensic casework and is becoming common practice in all food safety work.

In general, over the past five years GCP has tended to confirm public analyst findings on aflatoxins, reflecting the availability of robust analytical methods, a high level of expertise in the public analyst service and sampling methods that have evolved to deal with ‘hotspot’ inhomogeneity.

The GCP has also been called in to act as a referee for a number of cases involving nitrofuran veterinary residues, which are carcinogenic. Nitrofuran residues in food – especially shellfish – present a somewhat more challenging test. Before their 1995 ban in food-producing animals in the EU, nitrofuran veterinary antibiotics were widely used. Again there are problems of inhomogeneity in the distribution of these substances in food, and the parent drugs have a very short half-life in animals, so we use metabolite markers for monitoring purposes.

The problems are compounded by the fact that one of the marker compounds, semicarbazide (SEM), which is used to signal misuse of the parent drug nitrofurazone, does not solely arise as a metabolite of this drug: positive findings have also been associated with the use of breadcrumbs and other bread products arising from azodicarbonamide, a flour treatment agent that is not permitted in the EU. More intriguingly, SEM may occur naturally in the shell of crustaceans, including crabs, langoustines and shrimps. We have overcome this problem by analysing the inner core of shellfish meat because SEM detected in wild-caught shrimp, and therefore presumably untreated, seems to be surface-associated.

In 2011, GCP investigated four cases of disputed findings of nitrofuran marker residues in imported food and in each case overturned the official control laboratory (OCL) findings. In two of the cases GCP reported a nitrofuran marker metabolite to be present but at a concentration less than the reference limit at which the consignment would be banned from entering the food chain. As a consequence, we published a comprehensive advice note on nitrofuran analysis on our website. This is a ‘one-stop-shop’ outlining the position in European law, an explanation of how the marker metabolite is analysed, a summary of how SEM may be found in sources other than nitrofurazone, and a description of measurement uncertainty. Since then the number of disputes has diminished with only one so far in 2012 in which we upheld the OCL findings.

The BSE crisis 25 years ago, with its tragic human consequences, had an enormous impact on food law and the agrifood sector. The epidemic was generally thought to be caused by a rogue prion in processed animal remains fed to cattle, giving rise to an invariably fatal vCJD in humans consuming the infected meat. One of the key measures responsible for halting the spread of the disease, which is still in effect today, was the ban on feeding cattle remains to cattle.

Despite this, three years ago, the GCP became involved in a court case, the first of its kind in the UK, where this safety measure was alleged to have been flouted. A lorry carrying organic cattle feed was stopped and inspected in Cumbria because it had been suspected of previously transporting meat and bone meal (MBM), a form of banned cattle remains. The enforcement authority, the then Veterinary Laboratories Agency, using microscopy, reported the presence of muscle fibres and terrestrial animal bone. As is routine, the trader sent the second portion to a lab in another member state, which subsequently reported that MBM was not present, and the case was referred to the GCP.

We prepared a series of in-house standards of 0.01–1.0% MBM in a blank feed for avian, bovine, porcine and ovine species as a training set. Using glove bags and a dedicated lab area cleaned to DNA standards, we analysed the sample. This involved separation of animal remains by sieving and sedimentation in tetrachloroethylene, with subsequent staining to identify the components by transmitted light microscopy. The constituents of animal origin were identified on the basis of typical microscopically-identifiable characteristics – muscle fibres and other meat particles, cartilage, bones, horn, hair, bristles, blood, feathers, egg shells, fish bones, scales. Fish scales and bones are particularly beautiful and characteristic. We examined six replicates of the milled feed and found a total of 70 minute bone fragments, identified by their irregular outline, characteristic shape and staining with alizarin red, with spaces in bone for nerves to pass through. Interestingly, however, using immunoassay and DNA techniques, while we could detect MBM in blank feed spiked at 0.1% and 1.0% with bovine MBM, we could not detect this in the referee sample with this method. We concluded that tissues containing mammalian DNA or protein were sparse in the sample and/or the limits of sensitivity for the immunology and PCR-DNA methods did not extend to the concentrations of constituents of animal origin present.

At the subsequent trial, the first prosecution of its kind in the UK, the haulage company entered a guilty plea in the magistrate’s court and was sentenced in the Crown Court. The company was fined £25,000 and ordered to pay £4500 costs. It is intriguing to think that, in contrast to the sophisticated mass spectrometry we use for much of our casework, the technique that cracked this case, light microscopy, is one that dominated the work of the Government Chemists of the 19th century.

The Government Chemist referee function remains a demand-led service in the UK to give businesses an avenue of technical appeal. Its work in diverse areas, from confirming meat and fish ingredients in a range of foods, through identifying potential choking hazards, to identifying illegal dyes and additives in food, safeguards industry, government, and the criminal justice system from unwitting errors in analytical science. It is a varied and interesting programme of work, which often involves collaboration with partners on a host of food related issues.

Each new week brings a fresh problem – currently we are working on migration of formaldehyde from kitchen utensils and on unauthorised genetically modified rice – but those are stories for another day.