The fact that honey has antibacterial properties has been known since ancient times. This is mainly due to an osmotic effect – the sugar solution draws out water from its surroundings and makes it inhospitable for bacteria. Another biochemical explanation involves the enzyme glucoseoxidase, found in the intestine of the honey bees, which oxidises glucose to gluconic acid and hydrogen peroxide – a well-known antibacterial compound.

The first scientific papers reporting a pronounced antibacterial activity of Manuka honey, made from the nectar of Manuka trees native to New Zealand, were published in the late 1980s. Peter Molan from Waikato University was the first to describe a ‘non-peroxide’ antibacterial activity unique to Manuka honey, which was far more effective than the very unstable glucoseoxidase-derived activity. Several reports from various laboratories followed, showing that numerous bacteria, including antibiotic-resistant Staphylococcus aureus, are killed by this ‘non-peroxide’ activity.

However, attempts to isolate and characterise the compound(s) responsible for this phenomenon failed. Several compounds, in particular polyphenols, were discussed as being the ‘unknown factor’, but even if they had antibacterial properties, their concentrations in Manuka honey were far too low to show an effect.

My group at Technische Universitaet in Dresden, Germany, became interested in Manuka honey around 2006 more or less by chance. Our research concerns the reactions occurring in foods during storage and processing, and we were interested to study the formation of 1,2-dicarbonyl compounds in glucose or fructose.

For this, we analysed hundreds of commercial honey samples, including three or four Manuka honeys, by reversed-phase-HPLC. We discovered one prominent peak in the chromatogram, which was not present in any other honey samples and which we later identified by mass spectroscopy as methylglyoxal (MGO). The next step was to study, in collaboration with the Institute of Microbiology at TU Dresden, whether methylglyoxal has an antibacterial activity. In fact, we discovered that it is this compound exclusively that is responsible for the non-peroxide antibacterial activity of Manuka honey.

How methylglyoxal kills bacteria is not known. It is possible that it reacts with proteins in the bacterial cell membrane, making the membrane permeable, before entering the cell and affecting energy metabolism. Whether other compounds in Manuka honey act as ‘synergists’ and enhance the activity of methylglyoxal is often discussed, but no compound has yet been identified. One thing is sure: even if one or other compound may act synergistically, without methylglyoxal, there is no antibacterial activity.

Several food items such as coffee or bread crusts may also contain small amounts of methylglyoxal due to thermally induced degradation of carbohydrates in the course of caramelisation reactions. Based on this observation, some researchers have speculated about the possibility of inducing methylglyoxal in honey by heating. However, it is impossible to induce such high concentrations without damaging the product as numerous other carbonyl compounds, such as 3-deoxyglucosulose, hydroxymethyl-furfural, maltol, glyoxal etc, are formed.

Every honey, including Manuka honey, contains hundreds of individual compounds, in extremely varying concentrations. The most important constituents are glucose and fructose, which together account for up to 80% or more of the honey, followed by water, which is present in amounts ranging from 16 to 20%. All other chemicals, including amino acids, peptides, proteins, vitamins, minerals, polyphenols, flavour compounds and so on are present in the mg/kg range or below.

For Manuka honey, two characteristic compounds are important from a quantitative point of view, namely methylglyoxal and dihydroxyacetone (DHA), which occur at concentrations up to 800mg/kg for MGO and 1500mg/kg for DHA. Researchers at Waikato University some years ago identified DHA as the precursor of MGO. DHA is already present in the nectar, and is then transferred to MGO during storage of the honey. 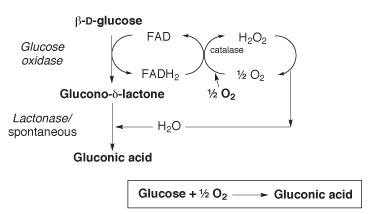 Analysis of honey is challenging as many interesting analytes occur only in very small amounts. Concentrations of amino acids or polyphenols, for instance, range from 1 to 100 mg/kg and must be measured using sophisticated chromatography. Furthermore, we still do not know all the compounds in honey, which could be helpful in determining the quality and origin of honey and in understanding the reactions occurring during processing and storage.

The nutritional benefits of honey are often overestimated. The amount of plant polyphenols in honey, for example, is very low when compared with the amounts of antioxidants in fruits such as apples. Moreover, glucose and fructose per se are reducing – and therefore anti-oxidative – carbohydrates. The amounts of minerals, vitamins, amino acids and so on are far too low to have any substantial impact in the body. It is not justified to say that honey in general is a ‘healthier sweetener’, compared with ‘conventional’ sugar.

Manuka honey is a food, not a medicine. Therefore, it may not be fair to compare this honey with antibiotics. At TU Dresden, studies comparing the antibacterial efficiency of classical antibiotics, such as penicillin or gentamicin with methylglyoxal have found that the antibiotics are around 100-fold more effective.

However, Manuka honey containing MGO could undoubtedly be useful as a ‘first step’ cure or additional support for infections. It was also shown to be effective, for example, against the hospital ‘superbug’ methicillin-resistant Staphylococcus aureus. In addition to wound care, meanwhile, some papers have reported that Manuka honey is very effective against Helicobacter pylori, a bacterium found in the stomach and linked to the development of duodenal ulcers and stomach cancer. H. pylori is very hard to eradicate using antibiotics, but MGO seems promising as it is very stable in acid conditions, such as in the stomach.

In conclusion, methylglyoxal-containing Manuka honey will not be a real substitute for synthetic antibiotics, but it may serve as a natural cure for certain applications.

The most important labelling systems for Manuka honey are the UMF value, which means ‘unique manuka factor’, and the MGO value. The UMF value is determined through an agar-well diffusion assay, comparing the antibacterial activity of honey against 10% phenol. The MGO value is the concentration of methylglyoxal in mg/kg honey, analysed by reproducible chromatography.

UMF and MGO are both trademarks. A consumer who pays for highly active Manuka honey must be sure that the product is worth its price. Therefore, a labelling system has to be scientifically sound and based on a published method that can be used in any laboratory. When you buy a MGO-labelled honey, every laboratory should be able to check whether the number on it is correct – there are several methods described in the literature for a reliable and unambiguous quantification of methylglyoxal. The best advice is to check whether you can find the corresponding analytical method for reproduction.

Interest in the medicinal use of honey dates back to the Ancient Egyptians, who mixed honey with fat to make an ointment, or mixed it with lint or cotton fibres, before applying it directly to an open wound. Today, better results are obtained by incorporating the honey into modern absorptive dressing materials, which keep the honey on the wound in the presence of exuded serum, says Peter Molan, director of the Honey Research Unit at the University of Waikato in Hamilton, New Zealand.

‘[Honey] fulfils all the requirements for the ideal wound dressing,’ Molan explains. ‘Its osmotic action keeps a moist environment, which is needed for unimpeded growth of repair tissues, with its antibacterial activity preventing growth of bacteria, which would otherwise be encouraged by moist conditions. Its debriding action releases attached pus and dead tissue, which otherwise would harbour bacteria and cause inflammation that inhibits healing. Its anti-inflammatory activity prevents inflammation, which would inhibit healing and cause formation of excessive scar tissue; it also decreases pain, swelling, and exudation of serum.’

Honey‘s osmotic effect is explained by its high sugar concentration, which draws water across semipermeable membranes surrounding cells. This outflow of water from the wound also encourages supply nutrients from the circulation to the cells growing to repair the injury, and to flush away detrimental substances building up on the wound surface.

The main interest in honey is for wounds infected with bacteria not responding to antibiotics, Molan says, adding that: ‘The most common wound-infecting species, Staphylococcus aureus, and its resistant strains such as MRSA, are very sensitive to the antibacterial activity of honey’.

New research by Molan’s group has shown that the anti-inflammatory activity of honey is due to its inhibitory effect on phagocytosis – the immune response process by which white blood cells engulf bacteria and dead cells to destroy them.

Another recent discovery, Molan reports, concerns the debriding action of honey, which results from honey stimulating the activity of plasmin, an enzyme that digests the fibrin clot attaching pus to wounds, but does not digest the collagen fibres that are the essential scaffold on which new cells grow for repair of injury.

In terms of labelling honeys, ‘I would like to see the level of the antibacterial activity shown, and for it to be stated whether it is activity that is due to hydrogen peroxide or to non-peroxide antibacterial factors,‘ Molan says, adding that: ‘This is because the enzyme catalase present in blood, serum and wound tissues destroys a lot of the activity due to hydrogen peroxide.‘

The level of the anti-inflammatory activity should also be shown, Molan believes, ‘because this varies greatly from batch to batch and is important for wound healing‘.

Thomas Henle is professor of chemistry at the Technical University of Dresden in Germany.