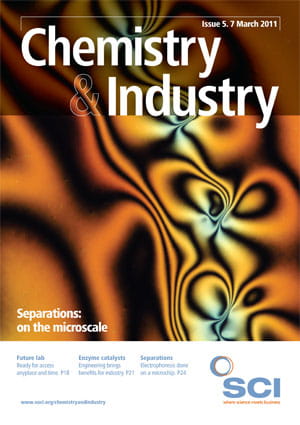 A new process that combines low temperature pyrolysis with microwave technology can turn almost any type of biomass into chemicals and oils. The inventors of the process say that farmers may one day, in the future, band together to buy one to turn agricultural waste, such as straw, into a char that could be burnt with coal. It could even be used to turn waste paper into a useful fuel.

Biomass is of great interest to researchers seeking to turn plant material into chemicals or even transport fuels, because there is potentially so much of it available. A 2005 report from the Oak Ridge National Laboratory, US, estimated that approximately 1bn t of dry biomass could be produced each year in the US with relatively minor land changes, while still meeting food and feed demand.

Biomass encompasses more than just traditional crops; it also includes agricultural and forestry wastes, animal dung and super-fast growing energy crops like switchgrass and willow that can be grown or marginal land with fewer inputs. And unlike other plant feedstocks used to produce chemicals and fuels, such as maize, there is no food versus fuel dilemma with these biomass sources. However, scientists have been stymied to date by the tough, woody plant material, high in cellulose, which is difficult to break into useful sugars. The microwave pyrolysis process being developed by chemists at the University of York in the UK can get around this problem and is able to hydrolyse the cellulose in an energy efficient manner. The process begins with any type of cellulosic biomass being heated in a reactor at around 180°C. Once the biomass has begun to ‘soften’ it is then blasted with microwave radiation, which causes a decomposition chain reaction that results in the production or sugars, small molecules, oils and, eventually, char.

The energy return on energy invested is also good. The process gets back 90% of the energy put into freeing the sugars from the tough, cellulosic materials. Preliminary results were presented at the American Association for the Advancement of Science annual meeting held in Washington, DC, US, on 16-21 February 2011.

James Clark, director of the green chemistry centre of excellence for industry at York, and one of the inventors of the process, says: ‘Cellulose is held together by rigid hydrogen bonds, so presumably when it softens there’s a bit of mobility there so the microwaves can get in and trigger the formation of protons and the protons rapidly decompose the cellulose.’ He adds that this process is like acid hydrolysis, a process that has been investigated as a way of freeing the sugars bound up in cellulose, without the need to add acid. ‘We believe this decomposition generates some sort of reactive intermediate,’ Clark says. ‘These reactive intermediates presumably kick start the decomposition of everything else there. So it’s not just that the cellulose decomposes at 180°C.’

Clark says that once the microwave processor gets working, the cellulose is broken up into its constituent sugars. These then undergo dehydration reactions to produce levoglucosan, which condenses to form longer chain, partially functionalised carbon molecules. These molecules then further condense to form ‘classic carbonaceous materials’, such as oils, and, after longer processing, chars.

However, the oils that come out the other end of the process are unlikely to be able to be blended with fuels like diesel or petrol straightaway. But Clark says that there are some factors running in their favour. ‘As your biomass is being microwave activated, you’re producing water and we continually take out the water and that removes a lot of the small polar molecules that are water soluble. What that means, of course, is that the oil you’ve got left is oxygen deficient, which is great for transport fuels because they don’t want oxygen: you want high hydrogen, high carbon.’

The microwave processor technology is currently being proven at the green chemistry centre at York and the team is now looking to commission a pilot plant. They are in talks with investors to build a continuous processor at the UK government’s Food and Environment Research Agency that should be able to handle as much as 50kg of biomass per hour. Clark says that this plant would give industry a chance to see how the process works and provide companies with the opportunity to take away the end products for further analysis.

These microwave processors, which are likely to cost in the region of £6m each, could also be very useful for farmers looking to make more money from agricultural residues. By joining forces several farms could buy a processor and turn farm waste, such as straw, into a much higher quality solid fuel. Clark says that their char has a similar energy value to coal and, as the process creates a much denser end product, would be much cheaper to transport.

In the UK, Drax, western Europe’s biggest coal burning power plant, began co-firing the station with a mix of coal and biomass in 2003. Drax says that this project should allow it to produce 12.5% of its electricity using co-firing, lowering its carbon emissions. However, at the moment it has proven difficult to keep Drax supplied with enough good quality biomass, Clark says. The processor would give farmers the opportunity to turn a waste product into a valuable fuel that could generate power. The team is currently working with the UK’s Carbon Trust on ways to blend these oils with transport fuels. This is part of the Carbon Trust’s Pyrolysis Challenge, which aims to replace a large portion of transport fuels with pyrolysis products.

To get around the problem of blending, pyrolysis oils are likely to require some catalytic upgrading. This upgrading would cut the levels of unsaturated compounds. ‘I think there’s a good chance that we can make intermediates which, with a modest degree of catalytic upgrading, will be blendable, because we’re starting off in a good position with low water and low oxygen,’ Clark says.