The battle for bisphenol 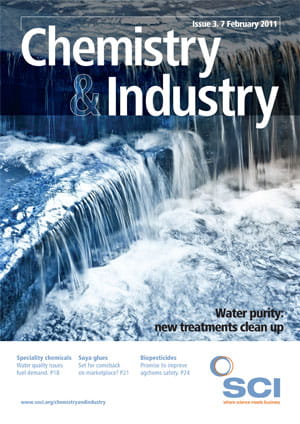 When the EU banned polycarbonate baby bottles in November 2010 (C&I, 2010, 23, 7), following Canada’s lead, its ultimate target was the plastic’s monomer, bisphenol A (BPA). The decision led to an outcry by the chemical industry that the ban was unscientific. The question now is whether the baby bottle ban is merely the thin end of the wedge and if industry can expect further bans on this vital feedstock.

Industry described the EU’s decision as unjustified. It claims that there are hundreds of studies showing that the chemical is safe. Not so, say opponents, some of whom call for zero tolerance in all food and drink packaging and products.

BPA is an industrially important chemical used to manufacture everything from CDs and sports helmets to reusable food and drink containers. Global BPA production was 4.9m tonnes in 2008, two-thirds of which went to make polycarbonate; about 3% of this polycarbonate is used in food contact applications. Baby bottles are just a small proportion of this application.

Industry figures point to the World Health Organization’s conclusion in November 2010 that action on BPA is premature because there is not enough evidence. There is a feeling that politics gazumped the calculations of the European Food Safety Authority, egged on by unilateral decisions by France and Denmark to ban BPA baby bottles. Some scientists have voiced criticisms. ‘It’s probably a harmless decision, but I profoundly object to the precedent it sets,’ says Richard Sharpe of the MRC Human Reproductive Science Unit in Edinburgh, UK. ‘It is a cop out. They are bowing to pressure.’ If such moves are done for politically expedient reasons, why bother doing the science at all, he asks.

Sound science must be the basis for regulatory decisions, argues Jasmin Bird, communications manager of the polycarbonate/BPA group at PlasticsEurope. She notes that there are no plans by regulators to change the tolerable daily intake (TDI). There is plenty of evidence that the chemical can be safely used, says Bird. But there are scientists who argue industry and the regulators are out of step. ‘The genie is out of the bottle when it comes to people accepting that this is not a chemical that should be used in food and beverage packaging,’ says Frederick vom Saal of the University of Missouri, US. Vom Saal says low doses of BPA have been reported to alter brain chemistry and structure, behaviour, the immune system and male and female reproductive systems. BPA is a known mimic of the main female sex hormone, oestrogen.

Ian Shaw, a toxicologist at the University of Canterbury, New Zealand, is concerned about BPA. To prove cause and effect is pretty near impossible without doing unethical studies, he says. And to make it more complicated, BPA has the same effects as other oestrogenic compounds, some of which occur naturally in plants like soy.

Shaw says nearly every scientist he knows accepts exposure to oestrogenic compounds is growing, along with a rise in the rates of breast cancer, undescended testes and early onset of puberty in girls. ‘Now whether this is cause and effect we can’t know, but it is a bloody big coincidence if it isn’t,’ he says. Sharpe strongly disagrees. He says BPA is inactivated in the gut and too many studies wrongly introduce the chemical directly into lab animals. ‘In the rest of our bodies, the levels are so low that if BPA is actually having the effects people are claiming, then it would be the most potent toxic chemical we’ve identified so far.’

But critics accuse regulators of failing the public and call for an overhaul in regulatory procedures. They argue that BPA is no ordinary toxin. Metabolic clearance is good, but BPA is not completely metabolised, says Shaw. Some will get into the circulatory system. ‘It’s not a “normal” toxic chemical: this is working like a pseudo-hormone, so concentrations of a nanogram will cause an effect,’ he says. Shaw does say, however, that he has some sympathy for regulators. For a regulator to act quickly, it needs categorical evidence of toxicity. Shaw says that this is ‘almost impossible to produce’, adding that regulators are unlikely to ban BPA outright. ‘Industry will simply take them to court and win. Because industry will say you don’t have any evidence and a court of law will agree.’ Babies are a special case: they are developing and can be fed from just one food source, hence the precautionary action.

None of the acceptable daily intakes are based on hormonal level effects, Shaw says. ‘I talk to the plastics industry a lot. I understand them saying there is no definitive evidence and they are right. But that doesn’t mean we can’t use our intellect to extrapolate to the human situation,’ he says. Counties and states in the US are starting to bypass national regulators and take action. But whether these actions are evidence-based is questionable.

‘The corporate studies are explicitly avoiding looking for any of the kind of harm that we are reporting,’ says vom Saal. He says regulators are stuck in the early 20th century and must modernise. The public is saying we do not trust these agencies, which use outdated assumptions, to tell us which chemicals are safe, he adds.

‘You have 100% industry funded studies drawing the conclusion that it is completely safe, even where the data clearly do not warrant that conclusion.’ says vom Saal. Industry disagrees and says that many of the ‘low-dose’ studies on BPA are unrealistic. Bird gives as an example studies injecting BPA into the brains of mice.

Sharpe is also critical of unrepeatable low-dose studies. ‘You can’t have the low dose effect being real and then the absence of effects. The only thing that adds up is that the low dose stuff is nonsense.’ But he is open to persuasion. ‘I don’t work on BPA, so I’ve no axe to grind. If it’s harming humans, I want it banned.’ But he worries further regulations may follow for the wrong reasons.

Shaw says no to bans on BPA and thinks the public should choose. ‘I’m a pragmatic bloke, but bisphenol A does worry me a little.’ But the effects of bisphenol A, he says, are long term. ‘You’ve got to eat it everyday. If I went into my local deli and saw my favourite food packaged in a BPA container, I’d buy it. If I had the choice of another container, I’d buy that instead.’

Presently, there is little chance of the two sides agreeing. This leaves regulators with some tough decisions that will put them in the firing line of both industry and consumers. But commentators note that an opportunity has arisen for BPA alternatives. This will be market driven and makes good business sense, according to vom Saal, who has a warning for industry. ‘The public desire products that aren’t packaged in BPA and the corporations who aren’t doing this are going to find themselves in litigation.’

Bisphenol A – this is your life

Bisphenol A’s story began in 1905 when a German chemist published the first paper on its synthesis. It went on to be developed as a synthetic form of oestrogen in the 1930s. In 1953 Bayer and General Electric independently developed manufacturing processes for a new high-performance plastic – polycarbonate – using BPA. Commercial production began in 1957.

A 1997 study concludes that BPA, in doses consumed by people, can alter the adult reproductive system in mice. Ten years later, the National Toxicology Program in the US expresses ‘some concern’ about potential exposure for foetuses, infants and children. But the US Centers for Disease Control and Prevention said that daily intake of BPA is 1m times below hazardous levels observed in animal studies.

In April 2008, the Canadian health authority said that, while adverse effects were not expected, the safety margin was too small for formula-fed infants. Major retailer Wal-Mart announced that it is to stop selling food containers, water and baby bottles and sippy cups containing the chemical in Canada. Bottle makers start moving away from BPA.

A European Union risk assessment report in summer 2008 concluded that BPAbased products are safe for consumers and the environment when used as intended. The UK Food Standards Agency affirmed in January 2009 that BPA exposure was well below what would be considered harmful.

The FDA announced in summer 2009 that it would reconsider BPA safety levels. Then, in December 2009, EU environment ministers expressed concern over recent studies.

During the summer of 2010, France followed Denmark in moving to ban baby bottles containing BPA. In November 2010, the European Union announced a ban on the manufacture of polycarbonate baby bottles by 1 March 2011 and the market placement of such bottles by 1 June 2011.

Anthony King is a freelance writer based in Dublin, Ireland.