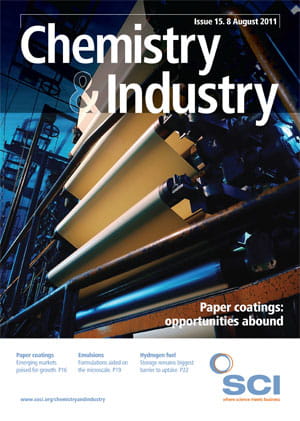 Emulsions play a key role in industries, ranging from food, through cosmetics, pharmaceuticals and coatings, to environmental clean-up and much more. They are mixtures of immiscible liquids in which one is present as small droplets – the dispersed phase – throughout the other continuous phase. A salad dressing, made by shaking oil and vinegar together, is an example of an emulsion in its most basic form. But as every cook knows, this form of simple emulsion is not very stable. Homemade vinaigrette salad dressings tend to separate quite quickly.

The emulsions used in most modern formulations are, in contrast, complex mixtures with a hierarchy of self-assembled structures, which have been carefully engineered to be able to respond differently under different conditions. They may be designed to be stable and have a certain range of physical characteristics during storage, but behave differently once the emulsion is applied to a substrate. For example, it is now possible to produce polymer emulsions with stimuli-responsive behaviour. When exposed to, for example, salt, heat or mild evaporation, these emulsions 'break' spontaneously to release the oil phase onto the substrate – a useful property for products such as moisturising lotions and agricultural sprays.

Controlled-size distribution in the droplets is desirable for product stability as well as for accurate triggered release in response to stimuli. The key to achieving this is to create very small droplets, ideally all of a uniform size. However, achieving this is a challenge. ‘Conventional mixing methods tend to result in broad distributions in particle size’, explains Robert Lochhead, professor of polymer science and director of the Institute of Formulation Science and of the National Formulation Science Laboratory at the University of Southern Mississippi, US. ‘Moreover, some emulsions cannot be made at all by simple mixing methods because the formed droplets coalesce faster than the emulsifier can diffuse and adsorb at the oil/water interface of the newly formed droplets’, he says.

Overall, the stability of an emulsion depends on its chemistry, physical properties and the droplet size distribution of the dispersed phase material. The latter two are influenced by the method used to create them. Processing parameters, such as mixing time, mixing energy and thermal history, all have an effect on the quality of the final product. Because it is difficult to control the processing conditions precisely, many products rely on the use of emulsifiers – substances added to an emulsion to stabilise it – and on the use of surfactants – compounds that assist in the formation of emulsions by lowering the surface tension of a liquid and the interfacial tension between the two liquids. But even the use of emulsifiers is not straightforward. Lochhead explains: ‘The kinetics of the emulsifier adsorption must be rapid in order to allow the emulsifier to diffuse to and attach at droplet interfaces before the droplets re-coalesce. Then the emulsifier must form a barrier to resist the coalescence of the droplets. Finally, the emulsions should be stabilised against separation by structuring the continuous phase’.

Conventional methods used to create emulsions include mechanical mixers, ultrasound and high pressure pumping. These work by generating forces that act on the entire bulk volume of the fluid to break up the dispersed phase fluids and create droplets. All have their limitations in terms of energy use; over-shearing of sensitive ingredients, such as cream, some waxes, chocolate and many others; or the need to use extra emulsifiers. To overcome these limitations, compositions and processing conditions are often over-designed to ensure that product requirements are met. The end result can be less than optimal product performance and higher production costs.

One way to avoid over-shearing is to use localised laminar flow, or laminar shearing, to create the dispersed phase droplets. This is the basic principle behind both membrane emulsification and microchannel emulsification. In these methods, droplets are produced by injecting the dispersed fluid into the flowing continuous fluid through arrays of pores or channels, so the shear forces are applied locally. This reduces the amount of energy needed for mixing, and leads to lower energy (shear) in the bulk of the mixture. In addition, because the dispersed phase particles are inserted into the continuous phase at the correct, uniform size, the process is better controlled and more precise temperature control is possible during emulsion formation. As a result, more sensitive materials can be used. 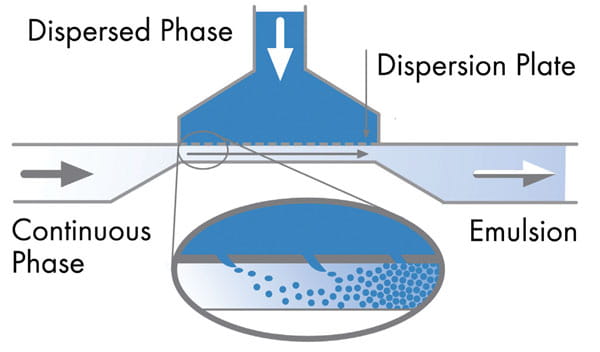 In membrane emulsification, the dispersed phase is pressed through a porous membrane – typically a cylindrical glass or ceramic tube – to create droplets which are then detached by the continuous phase flowing across the membrane surface. Although this technology is capable of producing mixtures with narrow droplet size distributions using lower energy input, there are limitations with respect to droplet size, heat transfer and scale up. These limitations are avoided in microchannel emulsification.

Microchannel emulsification takes advantage of the same microchannel process technology used in microchannel reactors. These compact reactors have channels with dimensions in the millimetre range. The small diameter channels allow heat to be dissipated more quickly and enable chemical reactions to occur at rates of 10 to 1000 times faster than in conventional systems.

The design and configuration of the microchannels are crucial. In these systems uniformly sized droplets as small as 1μm or less are formed individually by pushing the dispersed phase of an oil/water or water/oil emulsion system into a continuous phase through a specially designed porous dispersion plate made up of multiple parallel microchannels. The droplets are added to the flowing continuous phase, one droplet at a time to form the emulsion.

Coming on the market

Commercial systems for microchannel emulsification have been developed by Dow- Corning and by Smooth, a division of Velocys, the US-based member of the UK-based Oxford Catalysts Group. Both systems benefit from having a small footprint, and no moving parts. The Dow-Corning Advanced Flow Glass microchannel reactors, with microchannel diameters in the 400μm range are made of glass and are marketed mainly for making speciality chemicals rather than emulsification. Although the use of glass makes it possible to see the reactions taking place, it also limits the operating range in terms of the temperature and pressure.

The Smooth devices are made of stainless steel, and have microchannels with diameters that are typically in the 75–200μm range, though they can accommodate channels as large as 1500 μm. In these systems, a continuous stream flows through the microchannels and the dispersed phase is introduced perpendicular to it. Emulsions are created when droplets of the dispersed phase, created as the dispersed phase passes through a pore plate containing tiny precisely dimensioned pores, are swept up into the flowing contiunous phase. Although there is high shear created at the wall where the droplets of the dispersed phase are sheared off, the bulk shear is low and typically is not turbulent. As a result, fragile emulsion components are not damaged, enabling formulators to use shear-sensitive ingredients. The droplet size and the extent of the emulsifier adsorption can also be adjusted by controlling the pressures and flow rates in the system. This permits precise control of mixing energy, mixing time, and heating/cooling energy.

Individual modules have a footprint of just 25.4cm long x 7.6cm wide x 10cm high. A range of both microchannel (75–1500μm) and pore plate (0.2, 0.5, 1, 20, 40 and 100μm) sizes are available and pore plates and microchannel depths can be readily changed. Different pumps and heat exchangers are also available to suit different viscosities and desired flow rates. By adjusting the flow rate, dispersion plate, quench temperature and other process parameters, the droplet size can be controlled more precisely, compared with traditional mixing systems. The reproducible uniform particle size enables tighter specifications and consistent products to be produced.

In emulsion-based products, there are many ingredients that need to be present in the right ratios and the only way to determine if the ratios are correct is to run numerous tests. Developing the right formulations with the desired characteristics is rather like searching for a needle in a haystack. For a given composition of ingredients there are usually only a few possible formulations that have the desired characteristics and an astronomical number that do not. To find the optimum formulations, product developers are turning increasingly to a combinatorial approach – a method more commonly used in applications, such as drug discovery, medical technology and in genomics, that relies on the rapid screening of large numbers of mixtures. 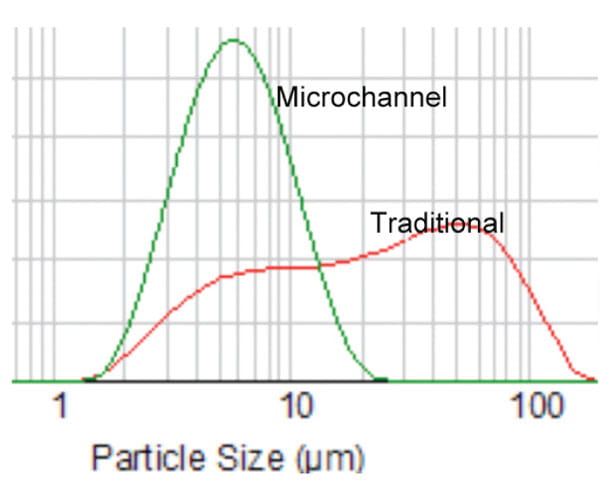 This is an area where microchannel emulsification is particularly useful. Conventional emulsification discovery systems operate in a batch mode, so creating new formulations requires developers to characterise the effects of new ingredients or process conditions by carrying out a series of lab scale experiments one after the other. This can be very time consuming because it is often only possible to carry out a few tests in a day. Then once the formulation has been perfected, the method has to be scaled up – a process that can be fraught with pitfalls. In contrast, microchannel emulsion systems are designed for continuous processing, so hundreds of sample tests can be carried out in a day. And once the right formulation has been developed, scaleup is simple. Like other microchannel applications, microchannel emulsion systems are modular, so scale up is a matter of 'numbering up', or linking up a number of identical modules.

For example, a single Smooth microchannel emulsification module is designed to produce 100mL – 5L/minute. But five units linked in parallel in a cradle system can process up to 25L/ minute; larger commercial units, consisting of multiple parallel cradles are designed to produce hundreds of litres of product/minute. The devices also can be arranged in series to make it possible to achieve the desired characteristics for an end product. ‘This flexibility allows for manipulation of a lot of different variables, making it an ideal tool for the combinatorial approach,’ explains Smooth president, Mark Grace, ‘The pore plates can be changed within minutes and even the point of addition of certain ingredients can be investigated with relative ease. The real-time nature of the system makes it possible to run multiple experiments very quickly. The flexibility and ease of experimentation mean that new products can be optimised in weeks, instead of months or years.’

As well as revolutionising product development, microchannel emulsification could – in the long term – change the way emulsion-based products are produced and distributed. ’Devices like Smooth are so small and portable that you could install them on mobile production units. So instead of shipping emulsions all around the world, you could produce them at the point of use and near the source of materials used to make them,’ Grace speculates. ‘Aside from the environmental advantages this offers in terms of reducing transportation needs, this type of smaller scale distributed production has the potential to bring about big changes in supply chain dynamics.’

Nina Morgan is a freelance science writer based near Oxford, UK, and handles the technical communications for the Oxford Catalysts Group.