Bright light on the horizon? 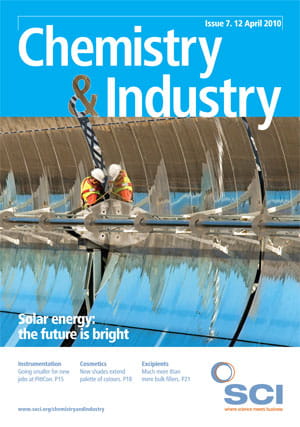 Governments are sending out mixed messages about support for solar energy but this is not slowing research into PV cells with higher efficiencies, Neil Eisberg reports

Most UK homes will need solar panels, and all cars in the UK will have to be electric, if the government is to stand a chance of meeting climate change targets, according to the Royal Academy of Engineering (RAE). In 2008, the UK had only 22.5MW of PV capacity, according to the RAE study: Generating the Future: UK energy systems fit for 2050, which projects how much this capacity could be realistically increased starting from this very small base. The RAE has taken the PV world leader Germany as the basis for its forecast for the growth that might be possible in the UK in the period to 2050. By the end of 2008, the RAE says Germany had around 5.5GW of installed PV capacity and estimates this will have increased to 7.5GW by the end of 2009. Assuming 2GW is about the average amount that could be added annually, the RAE says the UK could have an installed capacity of 80GW by 2050, which, operating at the current UK load factor of 9%, would provide an average of 7.2GW.

This 80GW capacity equates to around 14.6m2 of solar panels/person or 36m2/household, or about 25m 3.2kW installations across the UK, assuming solar modules operating at 90W/m2, a population of 61m and 25m households. If this level of market penetration is to be achieved then it is timely that from 1 April 2010 the UK has been offering a feed-in tariff for domestically generated renewable energy to encourage PV adoption. And even supermarkets like Tesco and Sainsbury have quickly responded by offering d-i-y photovoltaic (PV) solar installations from £10,000 for a modest system, although the installed costs are likely to be nearer £16,000, according to some observers.

But what is a feed-in tariff? It has generally been described as a method whereby governments can set above-market rates for electricity generated from renewable sources, like wind and solar electrical power. Electricity utilities are required to buy such renewably generated electricity at a fixed price for a fixed number of years, thus making the installation of PV panels or wind turbines cost effective for the installer. It is effectively a subsidy designed to increase the exploitation of renewable energy sources, and to help governments to meet their carbon reduction obligations. The approach has been particularly effective in Germany, for example, where the feed-in tariff was initially set at €0.57.4/kWh for PV systems of less than 30kW paid for 20 years, thereby fueling the massive growth in domestic PV systems.

The UK tariff for a typical 2.5kW PV system installed on an existing home, at a cost of around £12,500, is 41.3p/KWh generated, which will be paid whether that electricity is exported to the national grid or used by the home owner. When electricity is sent to the grid the home owner receives a further payment of 3p/kWh. For new-build properties fitted with solar panels a lower initial rate of 36.1p/kWh is payable. These payments are guaranteed for 25 years and are index linked, so they will rise in line with inflation. A typical 2.5kW system will therefore generate tax-free payments of around £1000/year, giving a payback on the investment in around 12 years. This also works out as a tax-free return on investment of 5-8% – far better than any UK bank account offers, and particularly attractive to UK taxpayers paying tax at the higher rate. Since the electricity generated can be used by the homeowners, they should also enjoy an average £100-150 reduction in their electricity bill.

But while the UK is just embarking upon this kind of financial support for domestic solar installations, other governments are seeking to curb what they see as excessive support during a time of economic restraint. Such action is giving further support for the UK critics, who believe that other domestic electricity users will be subsidising PV domestic development and that the UK has insufficient sunlight to justify PV installations.

PV supporters point out that while California receives 1.9 times more sunlight, the UK receives a similar level of sunlight to Germany, which has become the world leader with southern Germany currently producing almost 5% of total electricity demand from PV systems and a solar industry employing more than 60,000 people with a turnover in excess of €10bn/year.

The first few months of 2010 have seen heated discussions in Germany over whether to scrap its financial incentives for domestic PV installations, following in the steps of Spain, which scrapped its incentives in 2009, because the terms of the tariff are now considered too generous. After initially saying it would scrap the tariff entirely in April, due to the falling cost of PV panels, the German government has come under pressure to consider a reduction instead and implementation of such a change has been pushed back until June 2010 at the very earliest.

Elsewhere in Europe, Italy has delayed its own package of incentives to encourage PV growth, the Czech Republic is also looking at reducing the incentive it has been offering, both in terms of the size and number of years of the tariff, while France preceded Germany in announcing a similar cutback.

Furthermore the €400bn Desertec Industrial Initiative formed in 2010 by 12 mainly German companies and outlined at the SCI 2009 Global Summit (C&I 2009, 15, 15), is continuing to attract potential partners, most recently from the US. The project would link solar power generation in North Africa and the Middle East with geothermal power in Italy and wind power production in Northern Europe through what was then described as the European Super Smart Grid.

Unlike the PV panels used for domestic and most current industrial and utility installations, Desertec is mainly based on concentrated solar power (CSP), which uses parabolic mirrors to concentrate and focus solar radiation onto a collector, either a tube located at the focus of a mirrored trough or on top of a tower surrounded by focusing mirrors, containing a heat transfer liquid that can be used, for example, to produce steam for electrical generation.

German manufacturer Solar Millennium has installed one of the largest CSP systems in three stages, Andasol 1-3, in Andalusia, Spain, which will have a final output of up to 150GWh, with construction in Egypt of a 150MW plant south of Cairo expected to be completed by mid-2010. According to Solar Millennium, this type of solar thermal energy generation is the only technology for utilising solar energy in large power plants that has been commercially proven over a number of years. Parabolic trough power plants have been in successful commercial operation in California since 1985, and have already generated over 12bn kWh of solar electricity.

In the rest of the world, China is bidding to become the PV powerhouse with a massive programme of capacity increases for both PV cell and module production focused on exports. Meanwhile, the US is forecast to increase its use of solar power by 50% over the period 2010-11, according to the latest Short Term Energy Outlook produced by the US Department of Energy. Rather than domestic installations, large-scale commercial PV and central station utility scale PV are expected to become the dominant US growth market, says the Electric Power Research Institute At the Solar International conference in October 2009, CSP was much discussed and the first such installation to be constructed in the US for 30 years is currently in the planning stage.

Finally, the government of Australia has been criticised by the Australia Solar Energy Society for its continuing reliance on coal-based electrical power generation, which accounts for about 80% of capacity. In May 2009, the Australian government announced a $1.5bn Solar Flagships programme, as part of its $4.5bn Clean Energy Initiative, however, in addition to four solar thermal and PV installations totalling 1,000MW, the Initiative also included large scale funding for clean-coal projects that are proceeding much faster than the solar project.

Looking at the global PV market as a whole, and despite the opposing forces and drivers described above as well as the current economic climate, worldwide PV installations reached a record high in 2009, 6.43gigawatt (GW), according to the latest report published by US solar energy research and consulting company Solarbuzz. This represents a 6% year-on-year growth for an industry that generated $38bn in global revenues in 2009.

Europe accounted for 74%, some 4.75GW, of worldwide installations, with Germany, Italy and the Czech Republic collectively accounting for 4.07GW. According to Solarbuzz, these three countries ‘experienced soaring demand’, with Italy becoming the second largest market in the world after Germany. Spain, however, saw a collapse to just 4% of its 2008 level. The US took third place in the world, growing 36% to 485MW, followed closely by Japan, which enjoyed 109% year-onyear growth.

‘Industry performance in 2009 was remarkable in that it managed to more than fully replace the 2.3GW demand gap caused by the change of policy in Spain,’ commented Solarbuzz president Craig Stevens. ‘Looking forward, the industry will see a return to high growth, but in a low margin environment. Our analysis demonstrates that a wide range of start-up markets will help offset a slowdown in German demand in the second half of 2010.’

Solarbuzz predicts this high growth will continue for the next five years. Even in the slowest of its growth scenarios, the global market is forecast to be 2.5 times its current size by 2014. Using the fastest growth scenario, solar industry revenues could reach $100bn by 2014.

Worldwide PV cell production increased from 6.85GW in 2008 to 9.34GW in 2009, with thin film production accounting for 18% of the total. China and Taiwan continue to build their share of global cell production to give them a 49% share of the world total. Much of their production goes to Europe, with 74% of total European demand being satisfied by imports.