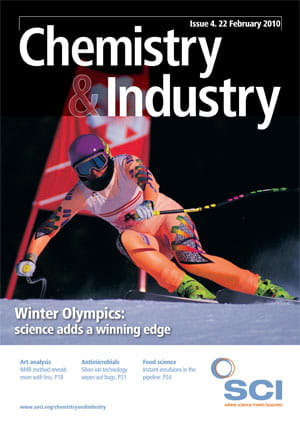 A stabilised form of ionic silver, the antimicrobial active SDC has opened up a host of applications for this tried and tested silver technology, writes Michael Krall

Hippocrates, the father of modern medicine, wrote that silver had beneficial healing and antidisease properties, and ancient cultures stored food, water and other liquids in silver vessels to prevent spoilage. Since then, several industries have embraced silver as a natural and effective antimicrobial solution, with silver technologies now prevalent in food processing and packaging materials, water treatment equipment, textiles, construction products and heating, ventilating and air conditioning (HVAC) systems.

The problem has been that ionic silver-based antimicrobials typically have very short shelf lives, ranging from hours to days because the ions are unstable and quick to complex with other environmental molecules. In addition, many silver ionisation systems require a constant source of electricity to provide continuous ionisation. However, US company PURE Bioscience’s silver dihydrogen citrate (SDC) antimicrobial is a silver ion complex, with a shelf life of several years. SDC is an electrolytically generated source of stabilised ionic silver that allows the ion to remain in solution while at the same time making it more bioavailable for antimicrobial action. As a platform technology, SDC is distinguished from competitors in the marketplace because of its superior efficacy, low toxicity and the inability of bacteria to develop resistance to it.

When approved by the US Environmental Protection Agency (EPA) in 2003, in its hard surface formulation Axen-30, SDC became the first new disinfectant active to be registered by the EPA in more than 30 years. Axen-30 was claimed to kill the disease-causing microbes Staphylococcus, Pseudomonas and Salmonella in just 30 seconds – 20 times faster than the then leading competitor. Rated as a category IV antimicrobial in terms of toxicity, Axen-30 was also judged to be safer than most other leading brands at that time which were mainly rated as category II products.

Since then, however, SDC has moved on a long way. As well as its activity against bacteria, SDC-based disinfectants are now known to have antiviral, and antifungal properties and are also active against the notorious ‘superbugs’, carrying a US Environment Protection Agency (EPA) -registered two-minute kill claims against MRSA (Methicillin-resistant Staphylococcus aureus), CA-MRSA, PVL-MRSA and VRE (Vancomycin resistant Enterococcus faecium).

In May 2009, the EPA included SDCbased disinfectants in its published a list of antimicrobial products that are effective against the 2009 H1N1 swine flu strain and also meet the US Centers for Disease Control (CDC) recommendations for infection control against the swine flu virus. PURE’s SDC disinfectants have been registered by EPA for use on children’s toys, cribs, high chairs and other sensitive areas in the home as well as for use on hard surfaces in environments including schools, hospitals and offices, and are odourless, colourless, noncorrosive, non-flammable and compatible with other disinfecting and cleaning chemicals.

In August 2009, PURE announced that it has EPA registration for its SDC-based sanitiser, sold under the trade name Axen-50, for sanitisation of food contact surfaces and equipment in environments including farms, food processing plants, schools, hospitals and other institutions, restaurants and homes.

The CDC estimates that foodborne pathogens cause 76m illnesses/year in the US, resulting in 325,000 hospitalisations and 5,200 deaths. And although consumers have come to expect such risks associated with meat products like raw hamburger, the proportion of outbreaks caused by seemingly innocuous fruits and vegetables is increasing. E. coli alone causes approximately 70,000 infections each year in the US, and 5-10% of those infected develop a potentially fatal kidney complication called haemolytic uremic syndrome.

Foodborne illness creates not only health but also confidence issues for consumers. Food recalls can have a significantly negative economic impact on businesses. For example, salmonellosis is estimated by the CDC to cost more than $1bn in medical costs and lost wages annually in the US.

SDC-based food contact surface sanitisers will offer the same benefits of efficacy as our disinfectants along with the same category IV toxicity for which no warning statements are required. In addition, SDC-based food contact sanitisers are odourless, colourless, noncorrosive, do not require hazardous materials procedures or gear and do not require rinsing after use. Food contact surface antimicrobials are processed as ‘sanitisers’ by the EPA and, if registered, can only carry a 60-second sanitisation claim, even if laboratory testing demonstrates faster kill times.

SDC formulates well with other compounds, acting as both a preservative and biocide that harnesses the antimicrobial properties of silver. The molecule is generated through a proprietary process (see Box) and combines with one or more organic acids to form a stable, efficacious new antimicrobial active or preservative. While SDC is highly toxic to bacteria, fungi and viruses it is non-toxic to humans and animals.

Ionic silver’s multiple modes of action are believed to be responsible for its quick and broad-spectrum efficacy. SDC plays the roles of both hunter and prey, using acids to attract and ionised silver to destroy bacteria and viruses.

SDC is a ‘Trojan Horse’ food source. Bacteria recognise the complex as a food source and move toward it via positive chemotaxis. This attack allows SDC to easily enter the organism, whereupon it causes irreversible damage to DNA and protein structure and function. Critical metabolic and reproduction functions halt and the organism dies.

Additionally, SDC is attracted to sulfurcontaining thiol groups common to proteins in the organism’s outer membrane. The complex destroys protein structure and function, causing lysis of the membrane and death of the organism. This dual action makes SDC highly and quickly effective against a broad spectrum of microbes. After microbial threats have been eliminated, surplus SDC provides residual protection against microorganisms. This provides prolonged protection up to 24 hours, contrary to the ‘here and now’ methods of traditional products.

Overall, creating a stabilised ionic silver formulation opens the door for its use in a wide array of products and treatmentsincluding personal care, food and water, textiles, agriculture and pharmaceuticals as well as consumer, commercial and industrial sanitisation and disinfection. As a proprietary ‘disruptive technology’, SDC is the first antimicrobial to emerge from its development platform as a biocide with broad spectrum activity and residual protection.

PURE Bioscience, which developed, patented and supplies SDC, has partnered with several companies to develop, market and sell the final products, including an agreement with specialty chemical manufacturer Ciba, now acquired by BASF, to market SDC in a variety of personal care products as a non-toxic, green biocide formulation. The company also has distribution agreements with several US companies to market SDC-based products, particularly as a hard surface disinfectant and as disinfectant wipes. In addition, SDC has application in agriculture, as it has shown ability to kill fungus on soya beans, and has been used to purify water in Africa. Meanwhile, PURE’s relationship with US pharmaceutical development firm FTA Therapeutics and the Cleveland Clinic is expected to yield several pharmaceutical products and medical devices for wound care and other dermatological applications.

Beiersdorf, the German manufacturer of Nivea cosmetics, recently began using SDC as the active ingredient in a number of deodorants, called Silver Protect, available for sale in most of Europe, as well as parts of Asia.

The specialty chemical industry will face continued pressure from regulatory bodies as well as from consumers, who are increasingly concerned about the toxic properties of many of today’s biocides. The investment opportunity for technologies that satisfy this niche will be substantial. The scientific community’s interest in silver as an antimicrobial agent has been piqued due to its good safety profile and ability to formulate well with other compounds, which will help meet the growing demand for ‘greener’ biocides across multiple markets.

Michael Krall is founder and ceo of PURE Bioscience, based in El Cajon, California, US.