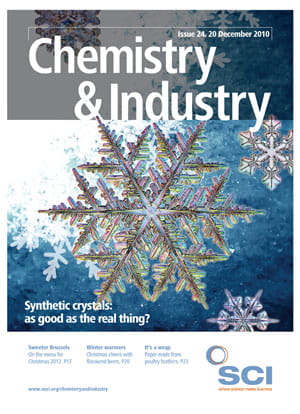 The story of a snow crystal is remarkable when you stop to ponder it. The whole complex, symmetrical structure of a snow crystal simply arises spontaneously, quite literally out of thin air, as it tumbles through the clouds.

Some parts of the story are well understood. The six-fold symmetry of a snow crystal, for example, ultimately derives from the hexagonal geometry of the ice crystal lattice, which has been known since the early days of crystallography. The nano-scale symmetry of the ice lattice is then transferred to the geometry of a large snow crystal through a process called faceting.

As a snowflake grows in the atmosphere, water vapour molecules stick to the molecularly rough areas of the surface, but not so well to the smoother surfaces. With time the rough areas grow out, leaving only the smooth facets of a hexagonal prism crystal. Faceting is the dominant mechanism determining the shapes of small snow crystals, so these tend to have simpler shapes.

For larger crystals, diffusion of water vapour molecules through the air provides another mechanism that determines crystal shapes. The six corners of a hexagonal plate stick out into the humid air, so the corners grow a bit faster. The growth makes the corners stick out farther still, and the process is reinforced. With time the small hexagon sprouts the six small branches of a nascent snowflake.

As the crystal continues to fall, the growth of the branches is critically dependent on the temperature and humidity around the crystal. As these parameters change, the crystal growth changes, and the result can be a very complex, ornate crystal. The six arms, however, all see the same conditions at the same times, so they tend to grow in a similar fashion. Even though the six branches grow independently, the result is a complex crystal with an overall sixfold symmetry.

While faceting and branching are fairly well understood, at least conceptually, other aspects of the snow crystal story remain mysterious. One persistent puzzle has to do with how the crystal morphologies depend on temperature. As seen in the morphology diagram (Figure 1), thin plates and stars grow just below freezing, around -2°C. Slender columns and slender needles appear near -5°C. Colder still, even larger and thinner plates and stars form near -15°C. Why these changes in growth occur as the temperature changes remains a scientific mystery.

My own interest in snow crystals began while studying the overarching scientific aspects of crystal growth – trying to understand the molecular processes, on the surface of a growing crystal, that control crystal growth rates. I quickly decided that ice would be a good case study, and that led me to investigate what was known about snow crystal growth.

To study this I mainly grow crystals in the lab under known conditions and measure their growth rates. Growing snow crystals in the lab for scientific study is all about controlling the environment. I typically grow small, simple snow crystals – tiny hexagons – as the physics of smaller crystals are easier to understand. Measurements of growth rates as a function of temperature, humidity, air pressure and, perhaps, the presence of chemical additives allow us to slowly unravel the varied aspects of snow crystal growth.

I also like to grow larger snow crystals and have recently made a series of movies of growing snowflakes for the BBC documentary Frozen Planet, out in 2011. I am currently setting up a new project to do very high resolution cinematography of growing snow crystals. Beyond reproducing what falls from the clouds, my aim is to create larger and even more beautiful crystals than those found in nature. Different conditions produce different types of crystals, ranging from hollow columns and needles to leafy stellar dendrites. My favourite photo sessions have temperatures around -15°C, a light snowfall, no wind and low clouds. These conditions produce the largest, most ornate stellar crystals.

The largest natural snow crystals are about 10mm in size, while 2–5mm is more typical for stellar crystals. The smallest crystals are sub-millimetre in size, and they are so light that they simply float through the air. These small crystals sometimes appear on very cold, cloudless days, when they sparkle brightly in the sunlight, earning them the name ‘diamond dust’. Every snowfall is different, and just a simple magnifier allows one to see some beautiful crystalline structures.

As we learn more about the physics and chemistry of how crystals grow, perhaps someday we can use that knowledge to help fabricate new and better types of crystalline materials. My scientific goal is to understand the fundamental physics of how molecules jostle into place to form a crystal. How fast does this happen? How does it change with temperature? What happens if there are chemical impurities on the surface? But beyond basic science and potential applications, these remarkable structures simply fall from the sky – we ought to understand how they are formed.

Kenneth Libbrecht is professor of physics and physics executive officer at the California Institute of Technology, US. He was awarded the 2010 Lennart-Nilsson award for his images of snowflakes, which have received international acclaim.