Josef Stalin is quoted as once saying, ‘A sincere diplomat is like dry water or wooden iron.’ But dry water does in fact exist and was first reported in the late 1960s, when it was patented as: ‘Predominantly aqueous compositions in a fluffy powdery form approximating powdered solids behaviour.’ The term denotes a powder, each grain of which is a micron-scale droplet of liquid water.

The droplets are formed by blending water (95 wt%) at high speed with a surface-adsorbed layer of silica nanoparticles (5 wt%), which have been pre-treated to make them intensely hydrophobic. Once coated, the droplets cannot flow back together, providing a powder that is effectively a form of high surface-area water.

After three decades in obscurity, dry water resurfaced in 2005 when the patent owners Degussa, now part of Evonik Industries, highlighted its potential cosmetic applications. This in turn led to a study of its physical properties by researchers at the UK's University of Hull, looking to explain the colloidal basis for the formation process. Headed by Bernie Binks, the group showed that the powder formation was driven by the very low ‘wettability’ of the hydrophobic silica particles by water. By blending water with silicas of decreasing wettability, they demonstrated that, as the silica was forced further out of the water by its own hydrophobicity, it would go from stabilising air bubbles in a water-in-air foam to stabilising water droplets in a water-in-air powder. It has since been described as an ‘inverse foam’.

In 2008, a short communication in the Journal of the American Chemical Society described the first new dry water application since Degussa’s cosmetic work. Headed by Andy Cooper, director of the Centre for Materials Discovery at the University of Liverpool’s department of chemistry, our group had investigated a method of exploiting the highly distributed water-gas interface formed across the surface of the dry water droplets. We had used this interface to maximise the contact between water and a guest gas, methane, in order create an innovative, alternative gas hydrate storage material.

Methane hydrate is an abundant natural resource, forming where methane and water come into contact at 0oC and upwards of 30 atmospheres pressure. A solid, ice-like crystalline material, it is most commonly found in ocean floor sediments and – problematically – in natural gas pipelines. However, it can also be formed in the lab, and boasts a methane storage capacity of 180 volumes of methane per volume of hydrate (v/v), in line with that of compressed natural gas (CNG). Advantageously, the hydrate can be stored at atmospheric pressure once formed, provided the storage temperature is adjusted to -20oC. 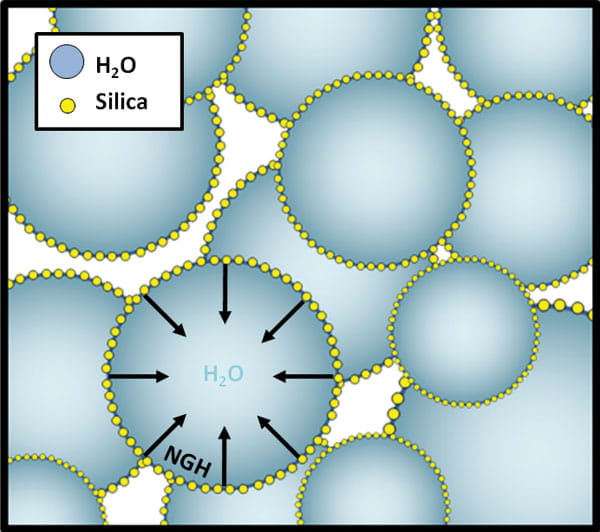 As such, the use of methane hydrate for storage purposes is of considerable interest for the oil and gas industry, with a pilot plant operational in Japan producing pelletised natural gas hydrate. Hydrate formation is glacially slow, however, and typically requires stirring or spraying to increase the contact between water and gas. At Liverpool, researchers have found a way to exploit the distributed water-gas interface of dry water in place of stirring, saving energy while improving the hydrate formation time from days to hours. At the same time we have been able to maintain the storage capacity at 97% of the maximum, and render the hydrate into a flowable powder, from which methane can be extracted simply by warming it up.

A drawback of the dry water hydrate process was the breakdown of some dry water droplets back to silica and water, which limited the recyclability of the system by reducing useful storage capacity from one storage cycle to the next. The research team spent the next year addressing this problem, while expanding the range of gases available for storage. In November 2009, a follow-up paper in the journal Langmuir described the results. By incorporating gellan gum into the dry water mixture, we were able to stabilise the droplets towards the hydrate formation–dissociation cycle, by immobilising the water in a hydrogel matrix. Increasing the proportion of gellan saw an associated reduction in the loss of storage capacity over cycles, until at 20 wt% loading of gellan we produced a completely recyclable gas storage system. The use of the gelling agent saw a slight reduction in absolute capacity (130 v/v) due to the presence of gellan fibres within the hydrate cages themselves.

This paper also reported the first data on dry water CO2 storage. The CO2 hydrate formed at lower pressures than methane and the formation rate could likewise be enhanced by dry water, bringing the attractive possibility of an environmentally friendly particulate CO2 capture medium made up of 95% water. Much of the recent media interest in dry water has focused on this aspect of the research. In a world where amine-based CO2 sorbents remain toxic and corrosive, research is ongoing on the potential of CO2 hydrate for pre- and post-combustion carbon capture and storage (CCS). However, at Liverpool we are cautious of recommending DW for the task. The elevated temperatures involved in flue gas CCS are likely to lead to swift evaporation from the dry water and indeed dry gel droplets, severely limiting their useful lifetime for these applications.

Our success in forming hydrates with dry water led to a further question: could other useful reactions be carried out in the same way? Gaseous reactants typically require a means of enhancing their interaction with reactants in solution, whether by ‘impelling’ or ‘sparging’, or through the use of trickle or packed bed reactors. Stirred reactions see a measureable correlation between the stirring power input per unit liquid, and the gas–liquid volumetric mass transfer coefficient. A system that could eliminate the need to stir reactions presents the opportunity for improved energy-efficiency.1 Could the distributed gas-liquid interface of dry water offer such a system?

As our test reaction, we took the well-studied hydrogenation of maleic acid to succinic acid (Scheme 1). The product serves as a useful feedstock for further chemical production, while the reaction itself proceeds via a heterogeneous metal catalyst in an aqueous solution, at moderate temperature and pressure (70oC, 20 atm H2). The challenge was to incorporate all these elements into a dry water-type reaction process, and to extract them again for analysis afterwards.

The ruthenium catalyst, mounted on fine alumina powder, could be mixed with the silica coating before blending to afford a catalytic shell; meanwhile, maleic acid could be dissolved in sufficient quantities that the stability of the resulting ‘dry acid’ droplets was not affected. The resulting reaction mixture was surprisingly stable at 70oC, showing little evidence of droplet breakdown even after two hours. Extraction of the liquid components could be carried out either by centrifugation, or by dosing with alcohol, lowering the liquid surface tension and leading to complete droplet collapse.

The results of this study showed that, as expected, dry water offers a much faster approach than an unstirred reaction, reaching 92% conversion within two hours, compared with just 4% unstirred. The technique still requires perfecting, however, as the control reaction stirred at 1200 rpm came to completion within just 10 minutes! The study remains a proof-of-concept for the feasibility of quiescent dry water catalysis, with the potential for optimisation through further test reactions. There also remain reactions that may benefit more than others from a dry water approach: viscous reaction mixtures, requiring a greater energy input through stirring, and those suffering from poor heat exchange which are typically run at less than the intrinsic reaction rate to offset this disadvantage.

New work by the Liverpool group awaiting publication reports the successful formation of powders from oil-in-water emulsions (C&I 2010, 17, 10). The resulting hierarchical encapsulation produces what is effectively an oil-in-water-in-air emulsion: oil microdroplets, stabilised by a polymeric surfactant, are held within water droplets, in turn stabilised by their silica coating. Complementary fluorescent dyes, dissolved in the oil and water phases, have allowed the team to image dry water materials to an extent not seen before. By using laser-scanning confocal microscopy, we have been able to observe the surface structures and internal oil domains of individual droplets.

While the applications of a dry emulsion are not immediately obvious, they could potentially offer a way of compartmentalising immiscible or otherwise hazardous liquids for handling and transport. An inherent advantage of the dry water process is the transformation from 'splash-able' liquid to dry, flowable powder.

The recent brief excitement over dry water has been fuelled largely by its anomalous name and nature, and its potential CCS applications. But what does the future really hold? In the past six months, the Cooper research team has redirected its energies towards realising the commercial potential of dry water methane hydrate.

Areas most likely to benefit from dry water technology are those involving gas hydrates. They include the monetisation of ‘stranded’ gas reserves, and the preservation of ‘associated gas’ to eliminate flaring. Stranded gas fields currently make up some 40% of global gas reserves, and are defined as too remote from market to be economically exploited using conventional gas transportation methods, for example, gas pipelines, liquefied natural gas (LNG) and CNG tankers. An on-site means of gas storage would allow such reserves to be tapped without a costly transport infrastructure. The temperatures required to store gas on-site as hydrate are those found in a domestic deep-freeze – around minus 20oC. The use of hydrates to provide an on-site storage medium can only be enhanced by the use of dry water or dry gel, reducing the energy demands by eliminating stirring.

The same is true of associated gas – small accumulations of natural gas found in oil fields. Historically this gas has had no means of useful preservation and has been burned off by flaring. In recent years, this has become less common, but it is still carried out. Just as for stranded reserves, dry water hydrates may offer a viable means of preserving this gas, for more efficient management of our resources.

From cosmetic innovation to scientific curiosity, and on to multipurpose green medium, dry water has managed to rise from obscurity to find a place in the modern scramble for sustainable energy materials. For Cooper and his team, the hope remains that interest will remain more than a (dry) trickle.

Ben Carter is a postdoctoral researcher at the University of Liverpool’s Centre for Materials Discovery, Liverpool, UK.