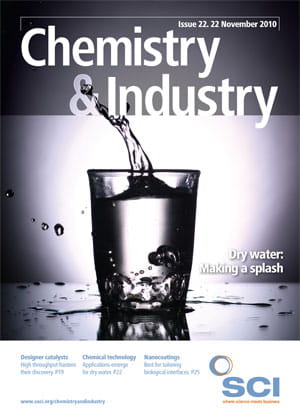 A biosensor to detect prostate cancer, a brain implant to treat people with Parkinson's disease, nanoparticles to surf down your bloodstream in search for tumour cells. All these developments can only fully succeed if a good interface is made between the biological and the non-biological world. Nanocoatings are an important step towards achieving this goal.

Our ability to make particles and coatings with structures the size of biological organelles has opened up new ways to interact with the biological world, resulting in numerous biomedical applications. Think, for example, of magnetic nanoparticles able to bind only to tumour cells in a blood sample and to transport them to a sensor where their concentration can be determined.

Nanocoatings are the key in many of these biomedical applications, be it in vivo, for example in implants, or in vitro, as in devices for blood analysis. Nanocoatings can, for example, make a surface love or hate water, make it repellent for protein binding, transform it into a good environment for living cells, or make it into a binding place for specific molecules.

One useful class of nanocoatings, of particular interest to us at Belgian research organisation Imec, involves the application of self-assembled monolayers (SAMs) for chemically modifying the surfaces of biomedical surface. SAMs are ‘amphiphilic’ molecules in which one end of the molecule has a special affinity for the substrate, while the other ‘tail’ end comprises a functional group that may be tailored to the desired end application of the biomedical material. They spontaneously organise themselves to form a nanometre-thick layer on the surface of the substrate.

The choice of SAM depends on the nature of the medical device to be coated. In the case of a metal surface, such as gold or silver, alkane thiolbased SAMs are used, whereas for coating oxide surfaces, such as silicon dioxide etc, silane-based SAMs are applied.

These coatings can often be produced by linking hydrophilic or hydrophobic functional end groups to the deposited alkane thiol or silane SAM. To make super-hydrophilic or superhydrophobic surfaces, researchers can change their nanostructure. For example, a surface can be made more hydrophobic by increasing the roughness using a method of plasma etching.

Imec has recently applied a super-hydrophic coating that it had developed to an actuator with an integrated micro-needle, a device that is used for positioning in vivo brain electrodes during brain scanning procedures.

Antifouling surfaces: Biofouling is the unwanted adsorption of cells, proteins or DNA onto the surface of a medical implant or biosensor etc. It is a common problem in biosensor applications, where it disturbs the proper functioning of the biosensor and results into noise signal and false positives. One type of antifouling coating applied to biosensors is a protein-resistant coating based on polyethylene oxide (PEO). SAMs with PEO end groups can useful prevent protein adsorption for both metal and oxide surfaces.

Cytophobic and cytophilic surfaces: Yet another area where SAMs may be usefully exploited in biomedicine, meanwhile, is to create surfaces that either attract or repel living cells, termed cytophilic and cytophobic, respectively. For example, bacterial cells grow and even multiply on an agar medium enriched with nutrients, but they will die on a metal surface. 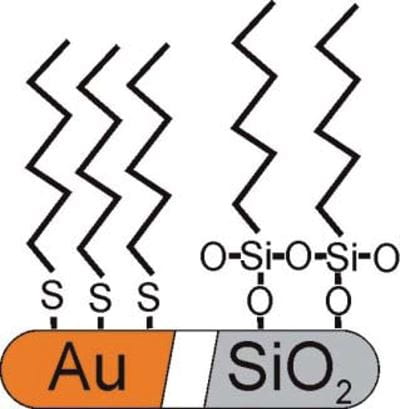 At Imec, researchers use these coatings to guide living nerve cells or neurons on electronic chip surfaces with electrical and chemical sensors and actuators. In this way, signals – chemical and electrical – coming from the neurons can be measured and even triggered. These neuronson- chip could in the future become an important research tool for brain research, for example to better understand Alzheimer’s disease.

A huge challenge in these neuron-on-chip systems, however, is to make the silicon chip surface cytophilic. Often, poly-L-lysine is used for this purpose. However, Imec has developed a surface-coating technique based on SAMs and a lamininbased protein (PA22-2). The use of SAMs has the advantage that the protein is attached very firmly to the surface, even when a positive or negative voltage is applied to the surface. The PA22-2 peptide binds specifically integrin alpha6beta1, a protein found in the membrane of neurons, which makes the cells adhere very strongly to the chip surface. Also, the PA22-2 peptide promotes the formation from the neuron of outgrowths known as neurites.

The foreign body reaction (FBR) is a natural reaction of the body towards foreign objects in the body, characterised by the formation of foreign body giant cells, encapsulation of the foreign object, and chronic inflammation. The functioning of implants can be degraded dramatically by this reaction. For example, electrodes will show an increased impedance and sensors will generate false results due to the fact that the blood around the implant has an abnormal constitution.

Imec’s coatings use soft and sponge-like coatings that mimic human tissue to disguise these inorganic implant surfaces. Hence, the body won’t recognise the implant as being foreign. Biocompatible silicones and polymers can be used. New functionality can also be added to the coatings to further reduce the risk of foreign body reaction (FBR), for example, by adding anti-inflammatory substances.

Low-impedance electrode surfaces: Some in vivo electrodes – for example those used to stimulate or record activity in a specific area of the brain – must be very small. However, this miniaturisation impairs performance by increasing electrical impedance. Electrochemically deposited coatings poly(3,4-ethylenedioxythiophene) (PEDOT) or iridium oxide can help to increase both the conductivity and the effective surface area of the electrode by roughening the surface.

Nanoparticles are of growing importance in the medical world. They can be used for medical imaging, to transport drugs through the body and even to burn away cancer cells. But the only way they can do this is by bio-functionalising their surface. For example, if you want magnetic nanoparticles to bind only the tumour cells in the bloodstream, you need to coat the nanoparticle surface with a biological receptor that will specifically bind to the tumour cells. These biological receptors can be attached to the nanoparticle surface by SAMs.

Contrary to mixed SAMs, pre-activated SAMs have the advantage that biomolecules can be coupled to the surface without the need for extra coupling reagents. Imec studies, for example, the use of cyano and N-hydroxysuccinimide groups as an alternative for the commonly used amino, aldehyde and carbonic acid coupling groups.

For example, the antibody for S100betabeta was attached to a cyano-silane SAM. S100betabeta is a marker protein for stroke detection. Another example is the use of a pre-activated N-hydroxysuccinimide PEO-alkane thiol SAM for the detection of the prostate specific antigen (PSA), a marker for prostate cancer.

Nanocoatings can be used to influence and even control the interaction between the biological and the non-biological world. Researchers have developed techniques to make surfaces hydrophobic/ hydrophilic, antifouling, cytophobic/cytophilic, resistant to the foreign body reaction, and biofunctionalised. This set of techniques is indispensable for the development of applications such as neurons on chip, biosensors and biomedical implants.