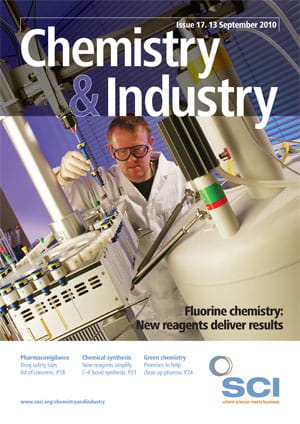 Since the earliest reported C–F bond forming reactions of the 1830s, fluorine chemistry has grown to touch the lives of everybody. Organofluorine compounds have found use in refrigeration, crop protection, polymers, non-stick cookware, microelectronics, toothpaste, textiles, fire protection systems, nuclear power, artificial blood substitutes and many more areas. However, some of the most important applications are in modern medicine.

Recent estimates1 suggest that roughly a fifth of all pharmaceuticals contain one or more fluorine atoms. They include, for example, the cholesterol-lowering drug Atorvastatin (Pfizer), the antibacterial Ciprofloxacin (Bayer), the antiretroviral Maraviroc (Pfizer), antimalarial Mefloquine (Hoffmann-La Roche) and anticancer compound 5-fluorouracil. As the second smallest substituent in organic chemistry, fluorine is often used as a substitute for hydrogen, particularly at sites that are susceptible to metabolism. The strong C–F bond leads to drug molecules that are more robust towards undesirable metabolic transformations, thus prolonging the activity of the drug in vivo. And introducing fluorine into a molecule can also affect drug properties such as polarity and lipophilicity, which can in turn lead to changes in the rates of absorption and transport.

The ability to introduce fluorine atoms into a molecule site selectively is a powerful tool when designing routes to compounds of pharmaceutical interest (see Box). Historically, fluorinating agents were hazardous, often volatile and difficult to handle, and required expensive and specialised equipment. They also frequently led to unacceptable levels of unwanted byproducts.

Nowadays organic chemists have an impressive array of fluorinating agents at their disposal. Importantly, newer reagents, for example: Selectfluor, DAST, DeoxoFluor, Rupperts reagent (Me3SiCF3), technically a trifluoromethylation agent, can be used in standard laboratory glassware. This has allowed more bench chemists to make C−F bonds with relative ease and has led to an explosion in the number of known organofluorine compounds reported in the literature. Nonetheless, there is still a relentless drive to find new reagents that display improved yields, economics, ease of handling, site- and enantioselectivity, as well as environmental acceptability.

In the 1950s, chemists recognised that sulfur tetrafluoride (SF4) can perform deoxofluorinations,2 converting alcohols to fluorides, aldehydes and ketones to gem-difluorides and carboxylic acids to trifluoromethyl groups. In practice, however, handling of this highly toxic gas necessitates extensive safety measures. Reactions using SF4 are often undertaken under pressure, require high temperatures – typically 100°C – and lead to undesired byproducts. This severely restricts the substrates that are suitable for the reactions and the scale at which any reaction can be performed, limiting its utility in the manufacture of pharmaceuticals and agrochemicals.

Liquid diethylaminosulfur trifluoride (DAST) was developed in the mid-1970s,3 but it was soon determined that this liquid is too thermally unstable and explosive in nature for large scale applications. The alternative, bis(2-methoxyethyl)aminosulfur trifluoride (DeoxoFluor)4 was developed in an effort to provide a safer reagent. Despite this, it has been shown by differential scanning calorimetry (DSC) that DAST and DeoxoFluor have the same decomposition temperature, 140°C, the difference being that DAST degrades more rapidly with a change in enthalpy, ΔH of -1700 J/g, and DeoxoFluor decomposes with a more modest ΔH of -1100 J/g.5

In addition to their thermal instability, DAST and DeoxoFluor have other disadvantages, especially in terms of handling. They are fuming liquids because of their rapid reaction with atmospheric moisture, even in non-humid environments, and they react violently with water to give large volumes of toxic and corrosive gases, such as HF and SO2. The liquids also discolour on ageing, and sometimes require re-distillation to be satisfactory for use. They are subject to strict legal provisions and shipping restrictions, which often hampers their movement across country borders.

Furthermore, DAST manufacturing has the disadvantage of requiring purification by distillation. This purification step is hazardous, requires extensive safety measures and specialised equipment, and is a major cost contributor to this relatively expensive reagent.

Upon use, DAST and DeoxoFluor can generate free HF, which is very volatile (bp 20°C), highly toxic, extremely corrosive to skin and other tissues including bone, and readily etches glass. Furthermore, deoxofluorinations using dialkylaminosulfur trifluorides are often problematic as the substrate frequently undergoes dehydration to the corresponding olefin. In view of these considerations, deoxofluorination remains unsuitable as a generally applicable method for introducing fluorine atoms into pharmaceuticals and agrochemicals. 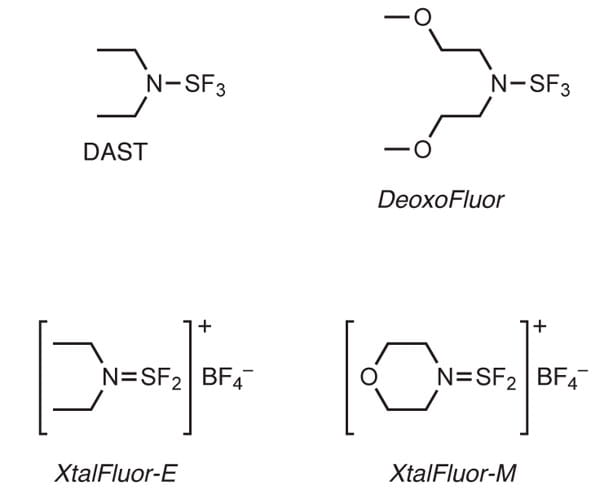 DAST and DeoxoFluor continue to be more widely used and are broadly considered to be the best in this class for general performance.6 At Manchester Organics based near Runcorn in the UK, in collaboration with OmegaChem in Canada and Sigma-Aldrich in the US, we have recently launched two new reagents. XtalFluor-E (diethylaminosulfinium tetrafluoroborate) and Xtalfluor-M (morpholinosulfinium tetrafluoroborate)* have been developed as a crystalline alternative to the liquid reagents (Figure 1).

During 2009, OmegaChem approached Manchester Organics with an interesting discovery. Researchers at OmegaChem observed that certain DAST salts were not only thermally stable solids but they were also capable high yielding dexofluorination reactions. This was clearly a significant breakthrough in this field.

Given Manchester Organics’ expertise in organofluorine chemistry, a partnership approach was the obvious way to develop these exciting new fluorinating reagents and bring them to market. Sigma-Aldrich also joined the partnership to provide marketing expertise, important in getting samples of these reagents to research chemists worldwide.

Whilst the formation of crystalline salts of aminosulfur trifluoride compounds was first reported in 1977,7 it is only recently that they have been developed as general reagents for deoxofluorination reactions. As expected, the manufacture and use of the salts has overcome many of the drawbacks of the liquid reagents. As solids, the reagents can be isolated and purified without the need for distillation, which has long been a significant safety issue and major cost contributor to DAST in particular. 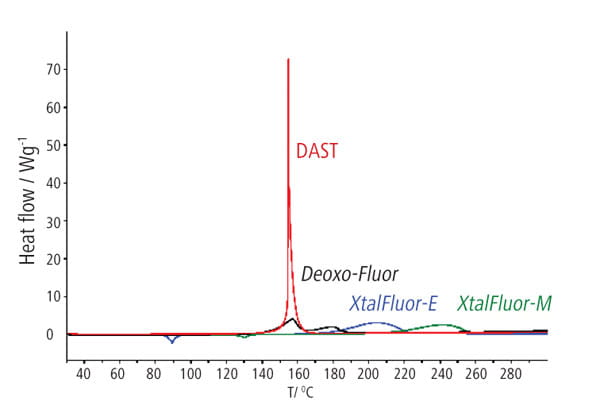 Initial attempts at deoxofluorination reactions using these salts were unsatisfactory. It was then realised that Xtalfluor salts generate tetrafluoroboric acid – as opposed to HF generated by the parent liquids – and as such the system is ‘fluoride starved’. It was envisaged that the addition of either a fluoride source or a non-nucleophilic base capable of deprotonating the alkoxy-N,Ndialkylaminodifluorosulfane intermediate should facilitate the fluorination (Scheme 1). When either 3HF.NEt3 or 1,8-diazabicyclo[5.4.0]undec-7-ene (DBU) was employed as an additive, conversions improved drastically often giving good to near quantitative yields of desired fluorinated product.

The favoured fluoride source for investigations has to date been 3HF.NEt3, initially chosen for its physical and handling properties and its compatibility with glass. It was found to be a good choice as it gave good yields and selectivity with both XtalFluor-E and XtalFluor-M. For reactions that do not give the desired selectivity it has been found that moderation of the 3HF.NEt3 by the addition of an equivalent of triethylamine, to make 2HF.NEt3, can greatly improve results.

Between 2009 and 2010, a broad study was then undertaken at the laboratories of OmegaChem to evaluate the potential of Xtalfluor salts as fluorinating agents. A varied range of alcohols and ketones were then subjected to the favoured fluorination conditions and good yields were achieved in most cases (see, for example, Scheme 2).5 Perhaps more importantly Xtalfluor salts displayed improved selectivity in terms of reduced levels of unwanted alkene compared with equivalent DAST or DeoxoFluor reactions.

With a decomposition temperature of 215°C and a ΔH of only -661 J/g XtalFluor-E is considerably more stable and safe than the parent aminosulfur trifluoride compound (Figure 2).5 The reaction with water is also significantly reduced, with fuming of the solid only visible in very humid environments, and addition to liquid water gives only a relatively modest reaction.

More detailed safety studies5 have been reported, including accelerated rate calorimetry (ARC) experiments. In short, XtalFluor salts show a significantly improved safety margin before the onset of decomposition when compared with DAST and DeoxoFluor. 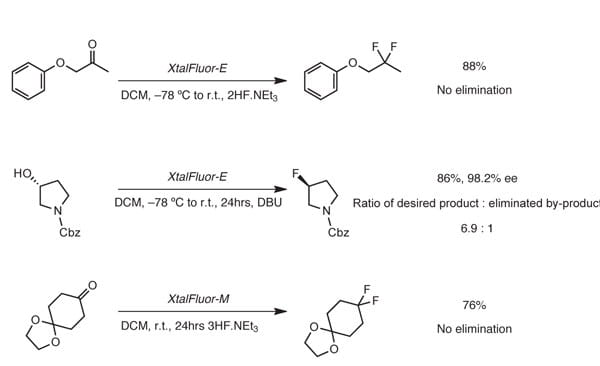 In summary, XtalFluor salts are capable of carrying out deoxofluorination reactions on a diverse range of alcohols and ketones. When used in conjunction with a suitable additive their yields are generally high, with less formation of undesired elimination byproducts. Their hugely improved safety characteristics, compatibility with standard borosilicate glassware and reduced levels of unwanted byproducts make these compounds attractive for large-scale applications. Most of all, the cost benefits of these reagents are likely to encourage workers in this area of chemistry to give this strategy serious thought when considering possible scale-up processes, and even revisit existing ones.

Our understanding of the scope and applicability of these salts is still at an early stage. Yet with their potential to open up deoxofluorination chemistry as a general, safe and economic synthetic procedure, XtalFluor-E and XtalFluor-M could lead to even greater numbers of fluorinated pharmaceuticals.

The first of these strategies, ECF, essentially involves the electrolysis of a substrate in anhydrous HF, which usually leads to poly- or perfluorocarbon products containing multiple fluorine atoms. Whilst ECF as a technique has become less popular in recent years, perfluorocarbons have found several applications in modern medicine, including diagnostic imaging, eye surgery, oxygen delivering systems, cancer therapy and respiratory medicine.8 Most fluorine-containing pharmaceutical compounds, however, contain one to four fluorine atoms at specifically selected sites, making ECF largely redundant.

Electrophilic fluorination, on the other hand, has become a much more favoured technique in modern times. Whilst elemental fluorine is extremely reactive and taming this gas presents immense challenges, the recent development of a number of electrophilic fluorinating agents of the N–F class, for example, Umemoto’s reagent, Differding’s reagent, and Selectfluor,9 has enabled significant advances in this field. As a strategy, electrophilic fluorination is an interesting one, since the nitrogen-fluorine bond in this scenario is considered to be polarised (Nd––Fd+), an unusual situation given that fluorine is the most electronegative element.

Christopher Bennett is a research chemist and Simon Clayton and David Tovell are both directors at Manchester Organics, based near Runcorn, UK. This article is dedicated to Keith Heckles, a dedicated engineer and popular team member, who passed away earlier this year.