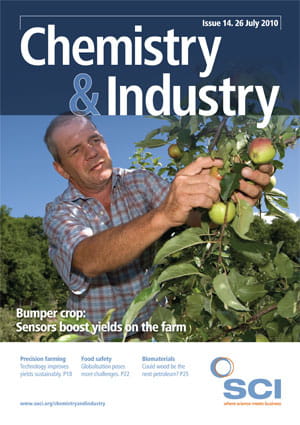 Globalisation has greatly multiplied the chances for contamination or adulteration of the food supply, but the technologies for testing food are up to the challenge, writes Paul Zavitsanos

The food industry is under unprecedented pressure to meet public demands for safe food. In the US alone, the Centers for Disease Control and Prevention (CDC) estimates that over 75m foodborne illnesses occur each year. Recent incidents include Worcester sauce contaminated with carcinogenic red dye in the UK; peanuts and peanut products containing Salmonella in the US; and the adulteration of pet food and milk products with melamine in China.

The seemingly constant stream of reports regarding contaminated food around the world serves to highlight the single biggest challenge facing the industry’s efforts to protect the food supply: globalisation. Process foods may contain raw ingredients from a myriad of countries, produced under a complex web of differing regulations and standards, and exposed to a wide variety of agricultural chemicals and biological contaminants, as well as to increased opportunities for economic adulteration of the food. Regulation tends to follow the public attention, as the European Union and Japan have set standards for hundreds of chemical compounds, and bills are working their way through the US Congress.

To be sure of the safety of the final food product, analytical scientists must be able to test for all potential harmful substances, as well as to check the integrity of ingredients that may have come literally from around the world. Chemical methods assay for small molecule compounds, such as pesticides, veterinary drugs, trace metals, small molecule toxins of biological origin – for example, mycotoxins – and environmental contaminants. Biological testing detects the presence of agents such as pathogens (primarily bacterial), allergens, protein toxins and moulds.

One of the most commonly and widely monitored classes of contaminants in the food supply chain is pesticides. More than 850 pesticides are in use worldwide and, while no single technology can effectively monitor such a diverse assortment of compounds, a wide range of gas chromatography/ mass spectrometry (GC/MS) and high performance liquid chromatography/mass spectrometry (LC/MS) systems is available to provide reliable and routinely screening, identification and quantification of ultra-trace levels of all regulated pesticides. For the screening and identification of non-target or unknown pesticides, liquid chromatography/time of flight mass spectrometry (LC/TOF) has the mass resolution and sensitivity to identify an unlimited number of ionisable compounds, including as many as 600 pesticides in one analysis.

Mycotoxins, highly toxic compounds produced by fungi, can contaminate food products when storage conditions are favorable to fungal growth. For example, a recall of some baby food in Canada in late 2009 resulted from fears that it may have been contaminated with elevated levels of ochratoxin A, a possible human carcinogen produced by fungi that can grow in certain grains. The analysis of individual mycotoxins can be difficult because more than 100 such compounds are known, and any individual toxin is likely to be present in very low abundance in a highly complex organic matrix. Combining rapid resolution, high throughput LC columns with MS has proven to be a fast, reliable way to detect and quantify these closely-regulated contaminants.

Animal diseases caused by viruses, bacteria, protozoa or fungi are prevented and treated with drugs, such as antibiotics. Livestock, poultry and farm-raised fish may also receive growthenhancing drugs. Because residues of these drugs may carry over into foods, such as milk, eggs, fish, meat and honey, government agencies around the world implement strict surveillance and monitoring programmes. Again, sensitive LC and LC/MS solutions provide rapid, reliable analysis of drug residues or their metabolites in complex food matrices.

Certain trace elements play a major role in human nutrition; others such as chromium and arsenic may be highly toxic. For this reason, they are monitored at almost every stage of food production. Elemental content may also provide information about a food’s geographical origin and authenticity. Inductively coupled plasma mass spectrometry (ICP-MS) is most commonly used to provide sensitive and reliable monitoring of these trace metals.

Several bacterial and viral agents can cause food-borne illnesses, with the most common being Campylobacter, Salmonella, Escherichia coli O157:H7 and caliciviruses, also known as Norwalk and Norwalk-like viruses. Traditionally, the food industry has tested for the presence of bacterial agents using well-established culturing techniques, which are very time consuming. By the time a sample is collected, prepared for culturing, applied to an appropriate culturing media, then incubated long enough to detect colonies and identify them, as much as five to seven days may have passed. By the time data are collected, a contaminated foodstuff may have been distributed and an outbreak of illness begun. As a result, new techniques are being developed to provide results in a few hours, rather than several days.

The rate-limiting step in traditional microbial testing is enrichment, which is the process of culturing the sample to produce enough of the microbe to detect it. Several approaches are being used and developed to reduce the time required for enrichment, including richer media and stimulants that speed up growth, and immuno-magnetic methods to concentrate cultures. The process can then be further sped up by using a technique such as immunoassay to identify the microbes, rather than traditional selective culturing and staining techniques.

Polymerase chain reaction (PCR) can be used to amplify the genetic material of suspected microbes that might be present in the enriched sample, for rapid detection. The process is very similar to that used in forensic DNA identification. Specific oligonucleotide primers are used to amplify RNA or DNA sequences that are characteristic of a given microbial species, or even a specific strain of that species. In this way, positive identification of the microbes present in a food sample can be made in a few hours, rather than a few days. The US Department of Agriculture (USDA) currently uses PCR-based tests to look for bacteria such as E. coli, Salmonella and Listeria, and will be adding other species soon.

Allergens in food are increasingly becoming a food safety concern. Most food allergens are proteins, presenting the problem of identifying a very small amount of an allergenic protein in a food matrix that is full of many other proteins. Removing allergenic proteins that may be present in as little as parts per billion is an emerging area in food safety, and one possible solution would be to apply the LC/MS analysis techniques that have been used in clinical proteomics.

In addition to pathogenic contaminants, adulteration of food by substitution of an ingredient for economic gain can also pose a threat to consumers. One of the most common adulterations is the substitution of less valuable seafood species for highly valuable ones. For example, studies have found that as much as 80% of the red snapper sold is actually a less valuable fish such as tilapia. Innovative biological testing methods have been developed to identify fish species in the food supply chain. One of these uses a variation of PCR referred to as PCR-RFLP (restriction fragment length polymorphism). This method involves amplification of the mitochondrial DNA from a fish sample and digestion of the resulting amplified sequences with a set of restriction enzymes, which cut the DNA at precise locations into fragments of a specific length. The resulting fragments are then separated by capillary electrophoresis on an automated lab-on-a chip device that generates the fragment patterns, compares them to a database of fish species, and then automatically makes a species identification. The entire process takes less than six hours.

The globalisation of the food supply means that the food industry must be prepared to test raw ingredients and finished products for contaminants or adulteration that may have originated from virtually anywhere in the world. For chemical testing, this means that testing methods must be able to detect and quantify all 850+ of the known pesticides, for example, as well as all of the known veterinary drugs, harmful trace metals, etc. Biological testing methods must be able not only to detect the major species of bacteria and viruses that may be present in the food, but also determine the exact serotype of each microbe, to determine the origin of the contamination. Each country of origin may have its own large set of Salmonella serotypes, presenting a daunting testing task, for example, for a food processor using chicken parts received from around the world.

Perhaps the biggest challenge that globalisation presents for the food industry is the required ability to find contaminants and/or adulterants that are unexpected. Melamine, for example, has never been used in food production or processing, and was intentionally introduced to milk to artificially increase its apparent protein value. This challenge requires that the industry develop discovery workflows that can detect substances or organisms that have not previously been seen in the food supply chain.

Chemical testing techniques, particularly using mass spectrometry, continue to evolve their sensitivity, specificity and speed to meet the challenge of developing discovery workflows that may be capable of flagging any suspicious new compound in a foodstuff. For example, LC/ TOF can identify an unlimited number of ionisable small-molecule compounds in a matter of hours. Sample preparation methods will also have to evolve to assure extraction of all possible harmful substances.

Molecular biology is helping to meet the challenge of developing biological discovery workflows that can detect the large numbers of known serotypes, and even new strains that have not previously been encountered. Microarray technologies are available that could assay for hundreds and even thousands of serotypes simultaneously, and produce results very quickly. Traditional chemical testing technologies are also being melded with cutting edge molecular biology methods to extend the capability of biological testing methods. Current PCR methods are often limited by the small number of target sequences that can be analysed simultaneously, from one sample. Substituting mass-based detection for the traditional fluorescence-based methods, and using a technique known as MassTag PCR that has been developed for clinical testing, it may be possible to simultaneously detect and quantify the presence of 40 to 50 different biological contaminants in a food sample.

While testing methods must become more comprehensive, they must also be made much faster and easier to use. This is most critical for biological testing, which must become fast enough to detect potential outbreaks during the food processing process, rather than in the emergency room. Given the human impact, as well as the economic impact, of such outbreaks, methods are needed that are fast, easy and inexpensive enough to be performed in the food processing plant or even in the field.

Molecular biology techniques are also being applied to biological testing to meet the challenge of providing accurate and sensitive results, quickly, with a minimum of operator expertise. PCR-based systems are being developed that use kitted reagents and simplified protocols to enable determination of major species of microbes within a few hours, using instrumentation that is inexpensive and portable enough to be used in processing plants.

In spite of the daunting challenges, the future of food safety testing is bright, with the potential to greatly expand the abilities of the food industry to detect and remove harmful agents from food, long before it arrives on our tables.