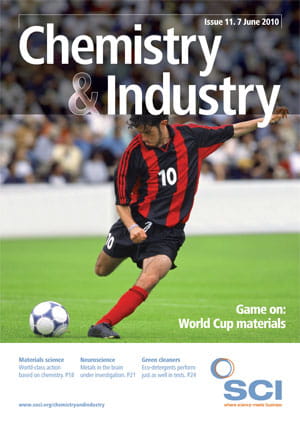 The beautiful game has been transformed by new materials – something that looks set to continue beyond the World Cup, says Lou Reade

Each World Cup tournament sports a new ‘official’ ball that seems to be lighter, faster and – crucially – rounder than ever before. The latest is Adidas’ ‘Jabulani’ ball, whose name derives from the Zulu ‘to celebrate’. ‘We are a long way away from the leather ball,’ said Germany’s former captain and manager, Franz Beckenbauer, at the launch of the Jabulani ball last year. ‘We now have new materials – and I’m not sure if they come from the Moon or Mars or wherever.’

The materials are actually of terrestrial origin – and most of them are polymers. The Jabulani ball has four layers. The inner core is a latex bladder, sourced from India. Around this is a woven fabric layer, made from cotton and polyester. These two layers – which are then dipped in latex – are quite standard for footballs. The clever stuff comes with the two outer layers.

First, there is a layer of eight interlocking panels, made from ethylene vinyl acetate (EVA) foam. ‘They’re not flat panels, they are actually 3D structures,’ says Andy Harland, senior lecturer at Loughborough University, who worked on the design of the ball with Adidas. ‘When they fit together, they form a perfect sphere.’

Instead of being stitched together – as is the case for most footballs – the panels are thermally bonded. This, says Harland, means that the stiffness of the ball is more regular across its entire surface. However, the fact that there are now fewer seams or ‘ridges’ on the ball can cause a problem. ‘The seams give aerodynamic stability – they keep the ball stable in flight,’ says Harland.

The answer was to introduce ‘false’ seams into the panels. Look closely, and you will see a series of grooves in the surface, which have been deliberately introduced to improve stability in flight. ‘We wanted to keep the positive aspect of seams, but remove the negative ones,’ says Harland.

The outer skin of the ball is a transparent thermoplastic polyurethane (TPU) skin. It is applied to the shell of the ball using vacuum moulding: the ball is placed into a mould, and the TPU film is heated and placed over the top. By creating a vacuum, the film is drawn over the ball’s surface, forming a protective, weatherproof barrier. The film must be lined up with the EVA panels because it includes features such as the aerodynamic grooves.

Another feature of the ball is a series of small dimples on the surface. These help surface moisture to drain away, to ensure that the ball handles the same in wet or dry conditions. In a recent lecture – to illustrate the ball’s weatherproof nature – Harland immersed both a Jabulani ball and a 1970s ball in water. An hour later, the Jabulani ball was the same weight, while the other had gained 12%.

Harland’s department was responsible for several ball innovations, and carried out wind tunnel work to assess the ball’s aerodynamic behaviour. ‘A lot of our work is to improve consistency,’ he says. ‘On a 32-panel ball, the stitching is six times stiffer than the panels. That localised stiffness can affect the way the ball deforms when it is kicked.’

And the move to just eight panels does not only solve the stiffness problem, he says. ‘It’s now far more economic to assemble,’ he says. ‘There are practical production reasons why you’d want fewer panels on a ball.’

Not every sport is as keen to embrace modern materials. Some sports, like cricket, pride themselves on a traditional approach. Although cricket balls are now made using modern production methods, they use the same materials – a core of cork and latex rubber, covered with a leather exterior – as they did in the 1700s.

The most recent physical change was the introduction of white cricket balls for floodlit matches, but cricket ball manufacturer Kookaburra insists that the only difference between the balls is the colour of the leather. Despite this, many players say that the white ball swings more – that is, it swerves more when bowled. This has been attributed to the protective coating applied to the white ball, which gives it a smoother surface.

‘I think there’s enormous potential to explore the use of new materials in cricket,’ says Harland. ‘I’ve seen some of the leather used in cricket balls, and there’s not much difference with the synthetic equivalents.’

Bats, too, have remained steadfastly wooden. Although Australian legend Dennis Lillee once came to the crease wielding an aluminium bat, the ancient description of cricket as ‘the sound of leather on willow’ seems likely to apply for some time yet.

Golf, though, is one sport that has embraced new materials. And, as with football, the point is to make the ball as consistent as possible. Traditional materials such as gutta percha, a type of natural rubber, and cork have given way to materials such as Surlyn ethylene copolymer for the surface and polybutadiene for the core.

While balls for amateur golfers tend to have simple two-layer structures – a rubber core and a firm cover – those for professionals can have three or four layers of modern materials. This is because pros can hit the ball harder – and demand far more control over the ball.

And it’s not always about the materials themselves. Sometimes, it is advances in the way that materials are processed that can have an effect on sports. For example, Harland was involved in a project called Scuta, which looked at how rapid manufacturing might be used in sports. Rapid manufacturing uses techniques such as laser sintering – which is traditionally used to make prototype models – to make real parts.

‘We’ve worked with a disabled tennis player for the Paralympics,’ he says. The player has a deformed hand, making it difficult for him to grip the racquet. Harland was involved in designing a special grip to allow him to hold his racquet comfortably. ‘This grip was unique to him, and would not be of use to anybody else,’ he says.

The design has even been tweaked: when the player began serving over the net too high, a new grip was designed so that the racquet is now angled slightly differently. The computer aided design (CAD) data for the new grip were immediately fed into the laser sintering machine, allowing the new part to be produced very quickly.

But if materials have come a long way in improving sports equipment, Harland notes that there are still challenges to meet – especially when using this new processing technology. ‘When using rapid manufacturing to make bespoke pieces of equipment, the fundamental drawback is the materials,’ says Harland. ‘The ways they can be processed using rapid manufacturing are currently limited.’

The Jabulani ball is not the only materials innovation at the 2010 World Cup. There are also improvements to shirts, boots – and musical instruments.

Nike has created shirts for eight teams – including Brazil, Portugal and The Netherlands – that are made from recycled drinks bottles. Each polyester shirt is made from eight used polyethylene terephthalate (PET) bottles. The material – sourced from waste streams in Japan and Taiwan – was melted down and used to make new yarn to make the shirts. Each shirt has 200 laser-cut holes that improve air flow and help to keep players dry. Nike claims that it has redirected 13m bottles – more than 250 tonnes of plastic – away from landfill and into the shirts.

Nike was also challenged to come up with a boot without any restrictions on cost or technology. It developed the Mercurial SL – which relies heavily on carbon fibre. The sole is made from a sevenlayer carbon composite material interwoven with TPU – the same material used in the Jabulani ball. A reinforcing rib adds strength to the structure. The carbon fibre is woven together at angles, for a flexible and lightweight boot – which weighs just 190g. The studs were injection moulded to the bottom of the sole, creating a single outsole piece.

But the most enduring – and noisiest – plastic articles at the World Cup will be the thousands of ‘vuvuzelas’. These are the brightly coloured plastic trumpets that many fans take to the game. On its own, a vuvuzela sounds a bit like an elephant – but a stadium filled with them is a different matter.

Lou Reade is a freelance science writer based in Kent, UK.

Iain Davis has always loved football, but retains a special affection for the World Cup – because of his fascination with South American players. ‘They always had a deft touch on the ball,’ he says. ‘They always seemed more controlled and flamboyant than the other players.’

And he has a theory for why this is: their innate skill, in many cases, comes from the fact that many began playing football without boots. Somehow, he reasons, playing with bare feet gave them more control over the ball, which they retained when they switched to boots. ‘It struck me that, if you could replicate the structure of skin on a football boot, you could improve your performance,’ he says.

This is no idle theory. He has since built many prototypes, and had them tested. His company, Brightstar Sports Tec, has attracted private funding to develop the boots, which he says can help impart more spin to the ball and protect the foot more effectively. The key to the boots’ performance is a multilayer pad that was developed with help from both Brighton and Loughborough Universities. The three-layer pad, based on different grades of soft silicone rubber, mimics the structure and behaviour of skin.

The top layer is the grip layer. Davis says that, as with skin, the contact point can stay the same even if the surface moves around. ‘Put your finger on the back of your hand and move it around,’ he says by way of explanation. ‘The grip point remains the same.’

Overall, he says, the boots will have a better grip and allow higher spin generation on the ball – a must-have for free-kick takers. The elastic middle layer allows the ‘travel’ of the top layer, while also absorbing ball impact. This improves the ‘touch’ on the ball. The base layer provides more absorption of energy. Davis says it could also give critical protection. ‘The tests we ran show that it could protect against metatarsal injuries,’ he says.

The thickness of the layers can be altered depending on the type of player: defenders might want a thicker bottom layer, he says, while a striker or winger might prefer a thicker ‘grip’ layer. Tests carried out at Progressive Sports – based at Loughborough University – showed that the boots imparted around 20% more spin to the ball than those from leading manufacturers. Davis is confident that he might be supplying top players by next year – and after that, if successful, the rest of the football-playing world. ‘Soon, I hope you’ll see a fantastic goal on You Tube, scored by somebody wearing my boots,’ he says.