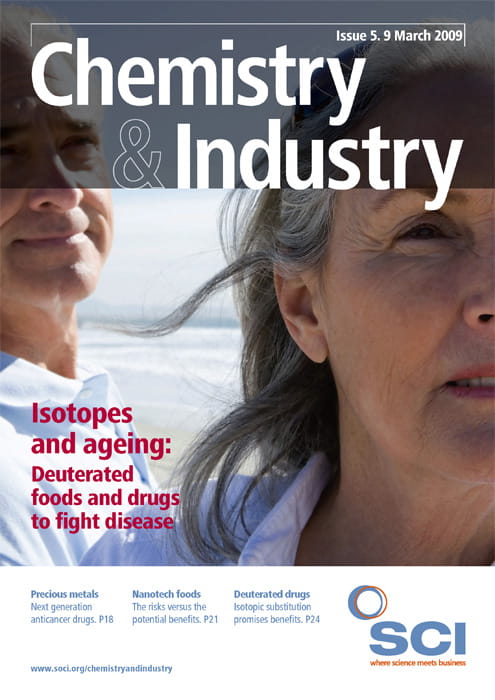 Despite a drop in attendees, of 10% according to the organiser, but judged more like 25% by attendees themselves, and much less ostentatious stands from the big players, there was still some optimism at Informex 2009. There was still much concern, however, about the current and possible future impact of the global recession on the fine and speciality chemical sector.

But the unexpected optimism wasn’t just limited to US companies, as UK exhibitors reported mixed but generally positive business performances that depend upon the nature of their customers. Clearly suppliers to the consumer electronics and automotive sectors are suffering the effects of the drastic cut-backs in those sectors, but companies supplying the pharmaceutical, often considered recession-proof, and the biotech sectors are still experiencing good demand. There were comments, however, about problems with the smaller biotech firms, which have yet to market or license a product and are experiencing cash flow problems.

Big pharma and speciality pharma firms that have products on the market do not seem to be cutting back on material purchases whatever they are doing to reduce their workforces. To meet these demands there is still investment under way amongst their suppliers.

Since the beginning of the year, the pharma business at Saltigo, part of Germany’s Lanxess, has been headed by Andreas Stolle, with sales and marketing in the pharma business line the responsibility of Tony Jones. Both agree that 2009 will offer not only challenges but also opportunities for the life sciences segment. ‘Nearly all pharmaceutical companies have launched cost-cutting programmes. With money so tight, efficiency and cost discipline will also become more and more important in future for smaller, researchoriented pharmaceutical firms,’ says Stolle.

Jones pointed out that the underlying conditions are also changing for the big companies in the industry: ‘Their portfolios will become less dominated by blockbuster products, as in many instances we see a move towards a more limited yet potentially attractive range of niche products. This creates interesting business possibilities in the field of custom synthesis wherever our customer’s internal capacities are not available or are not sufficiently flexible to meet their product and market development aspirations.’

The first phase of upgrading Saltigo’s US site in Redmond, near Seattle, Washington, acquired in 2008 to support its pharmaceutical business, has been completed. ‘The capacity of the cGMP pilot plant was doubled and a second kilolab opened,’ said Redmond site manager, Timothy Fitzpatrick. ‘In addition, we installed a low temperature unit in the pilot plant, which enables us to operate at temperatures down to -70°C. This capability enables us to perform many modern synthetic steps with a high degree of selectivity in order to achieve the stringent quality demands of our customers whilst at the same time reducing the formation of unwanted byproducts.’

It is also increasingly important to provide security of continuing supply. At its integrated site in Leverkusen, Germany, Saltigo increased its capacity for a pharmaceutical precursor for a major pharmaceutical manufacturer while production was ongoing. Output of the active ingredient precursor was raised from 30 to 50 t/year. Carsten Hesse, head of pharma manufacturing strategy said: ‘It was essential as far as our customer was concerned that supplies of the product could continue during the expansion phase. Careful coordination of the investment programme running in parallel with normal production ensured we had no downtimes at all that would have resulted in an interruption to the overall supply chain.’ The project also led to process and plant optimisation including a speedup of analytical procedures.

Asymchem Laboratories, based in Morrisville, North Carolina, launched its integrated chemical and pharmaceutical services programme designed to accelerate the development of drug candidates to Phase I clinical trial stage. The integrated approach is said to eliminate ‘white space’, reduce costs and hand-off delays, and increase the benefit-risk ratio, providing one seamless process. The company will also open its new cGMP high potency compound production facility in Tianjin, China, in March 2009. Two API suites will be available initially: one with five 50L reactors, the other with 100L reactors.

India’s Piramal Pharma Solutions is on schedule to commission a new state-of-the-art formulations development and clinical trial materials (CTM) supply centre at Ahmedabad, India. The centre will have GMP supply capabilities from March 2009. The development is the latest in a series of investments, involving both European and Indian assets, broadening Piramal’s involvement in clinical trials.

‘The latest development in Ahmedabad signals the continuing upgrade in our clinical trials manufacturing and services capabilities,’ commented R Ananthanarayanan, president and head of Piramal Pharma Solutions. ‘The programme marks further expansion of our synthesis-tomarket supply chain, with further elements due for announcement later this year.’

Northern Ireland’s Almac Sciences launched its solid state chemistry capabilities into the US market. Optimising the physical, solid form properties of an API is a critical early step in drug candidate development. Almac believes it is one of only a handful of contract providers with this capability at its Craigavon laboratory complex. The company also highlighted its new capability to create scaleable cloned biocatalysts for the synthesis of chiral acids, amides, esters, alcohols and amines, and the expansion of its GMP and non-GMP radiolabelling service.

‘Cash and cost savings are priorities in the present climate, but the industry can’t afford to simply set process innovation aside until things get better,’ said Pete Jackson, ceo of UK catalyst technologies company Reaxa, which claims market leadership in metal scavenging technology. ‘Sustainable advantage for the longer term will only come from determined development and application at scale of faster, cleaner and less costly production processes,’ said Jackson.

Most new drugs require at least one stage of precious metal chemistry and Reaxa’s technology, is said to allow products to be tailored to help simplify work-up and minimise metal losses. The company’s bulk QuadraPure and QuadraSil scavengers are now available in hundreds of kilos, and production of tonne lots will be on line later this year. Additionally, Reaxa’s scavenger range encompasses highly functionalised smaller-scale, high purity applications.

With their potential for re-use, combined with avoidance of costly purification steps, Reaxa’s encapsulated EnCat catalysts can also dramatically cut process costs in cross-coupling, hydrogenation and oxidation chemistries. The company is currently trialling its most advanced new product: Nickel EnCat, a non-pyrophoric and re-usable hydrogenation catalyst.

With nickel accounting for 20% of the pharma hydrogenation catalyst market Nickel EnCat is said to offer an alternative to current generation Raney/ sponge nickel catalysts. These require complex and hazardous processes, are awkward to handle and often limited to single use. Nickel EnCat has labtrialled successfully and is currently in ‘beta test’ trials in Europe, North America, India and Japan.

Scotland’s lipid specialist Equateq has successfully synthesised omega-6 fatty acid dihomma-gamma-linoleic acid (DGLA) in commercial quantities at up to 98% purity. As a precursor to eicosanoids, the hormone-like substances that regulate cell function, DGLA has a potential application in the treatment of eczema, psoriasis, asthma and arthritis, but has been difficult to source naturally. The most usual route is via GLA sourced from evening primrose or borage oils, which is converted to DGLA in the body. ‘My team has essentially mimicked processes from within the human body in order to deliver DGLA in a super-pure form,’ said ceo Adam Kelliher. ‘We expect to be announcing characterisation of several other lipid APIs in the months and years to come.’

In addition to promoting its growing ChiPros range of chiral amines, alcohols, epoxides and acids for use as reagents and drug building blocks, BASF featured two new catalysts from its NanoSelect platform technology. The catalysts, LF100 and LF200, have been designed specifically to provide a lead-free replacement for Lindlar catalysts used in hydrogenation processes. Based on unimodal nano-sized palladium clusters, the new catalysts offer similar activity and specificity to Lindlar catalysts, but offer significant cost savings as a result of having much lower levels of precious metal, up to 10 times less, and eliminate the problem of lead appearing in the final product. Further R&D to look at platinum and rhodium catalysts based on this technology is currently under way, according to Hans Donkervoort, global technology manager for BASF specialities and fine chemicals catalysts in the Netherlands.

In the area of C-C coupling, BASF introduced its organozinc halide reagents, which are now available in commercial scale quantities for Negishi coupling reactions. According to Christopher Sutton, product manager for BASF’s organozinc chemistry, the new reagents operate under milder conditions, with faster reaction times, and give higher yields compared with the Grignard reagents used in Kumada coupling reactions, where the highly reactive nature of the reagent gives low specificity, the tin-based reagents used in Stille couplings, where the tin also gives toxicity problems, and boron-based Suzuki reactions, where functionality affects the reactivity. He said the BASF organozinc reagents are highly chemoselective and are tolerant of functional groups, such as aldehydes, esters, ketones and ethers on both the nucleophile and electrophile.